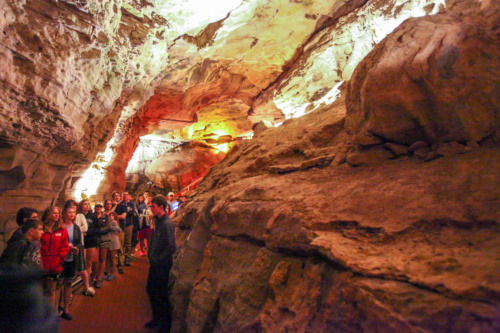 Some people just seem to like walking around in their birthday suits. Howe Caverns found that out last July when the Schoharie County tourist attraction launched its inaugural “Naked in a Cave” event. More than 280 naturalists chillaxed during International Nude Day as they spelunked au naturel 15 stories underground to witness impressive rock formations and other geological wonders.

“It was such a positive event,” recalled general manager April Islip. “Everyone had a great time, so we’re really excited to host another one.”

Islip did note that the event disrupted the summertime business-as-usual proceedings. “July is in our peak season so it was really hard to coordinate it during the summer,” she said. “But things quiet down after Labor Day. Without so many people on the property, it gives us the opportunity to take more time with the setup.”

A new wrinkle this year is the addition of a naked yoga class that will be conducted by a clothes-free instructor; there will be a $20 fee. Back for an encore is harpist Lydia Zotto as well as a local photographer who specializes in boudoir pictures that the guests can purchase.

Admission to the naked stroll only is $75, while guests can enjoy the walk as well as a three-course plated meal from the venue’s café for $130.

Following an elevator ride 156 feet down to the cave, the tour features a guide who leads groups of 30 to 35 people past a half-mile of rocky formations that are enhanced by multicolored lighting effects, plus a brief boat ride that stretches an eighth of a mile. Howe highlights include the Bridal Altar and the tight squeezes of the Winding Way.

As the second-most visited natural attraction in the Empire State (Niagara Falls takes first place), Howe Caverns has a global reputation. “We get a lot of international visitors,” Islip noted last year. “Next to Canada, the most amount of our visitors come from Israel. We also get a lot from China, we get quite a bit from Australia, and we’ve had some from Denmark.”

The cave also maintains a temperature of 52 degrees year-round. So jackets are a good idea to tote along for the subterranean journey, even during an above-ground sweltering July heat wave.

Rivers Deep, Mountains High: Lakes, museums, more can be explored within the Blue Line of the Adirondacks
Summer Times 2019: The warm-weather CNY goings on
To Top