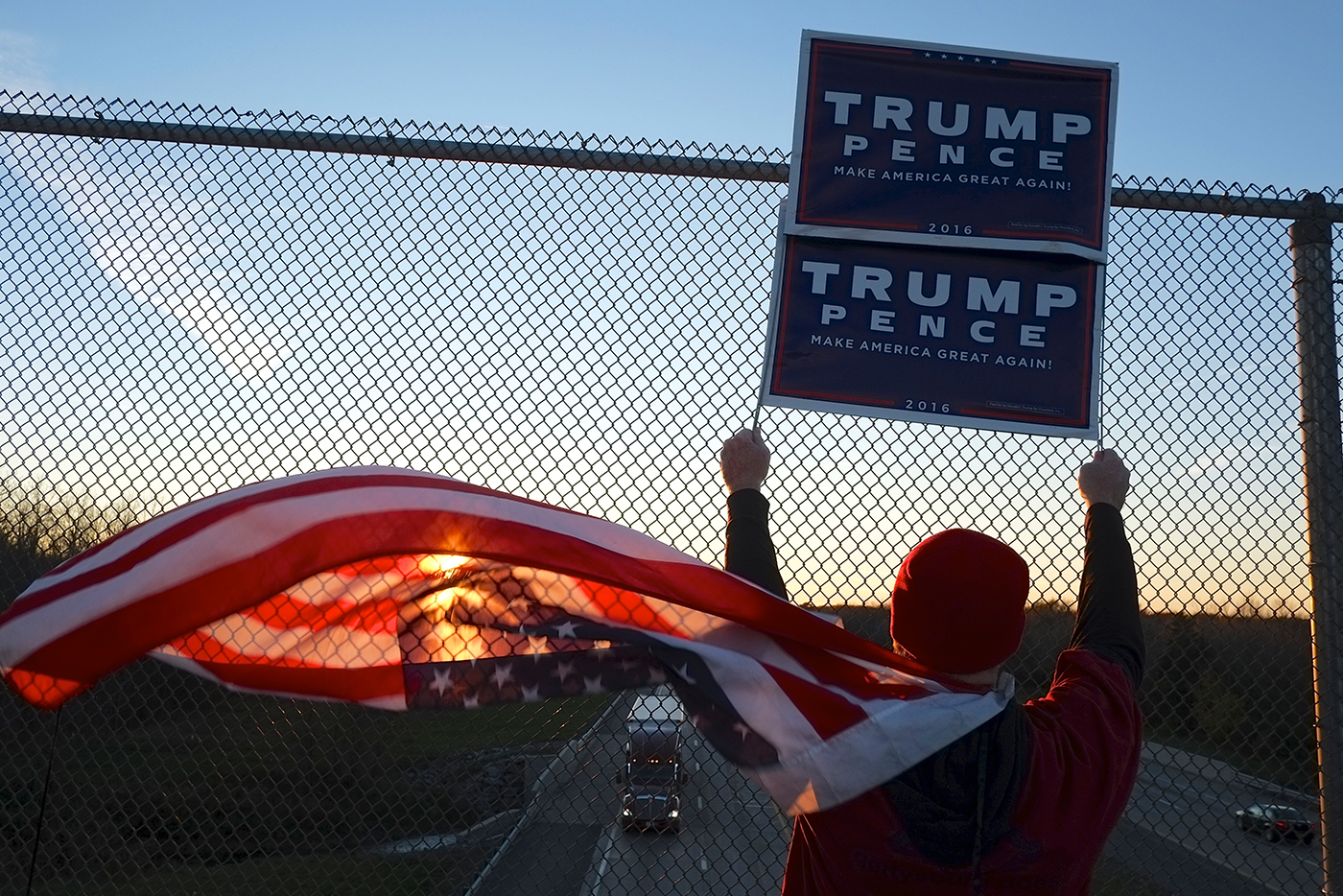 How Trump Pulled It Off

Donald Trump pulled off something that seemed impossible; here’s how he did it.

An election that came with a new surprise every day ended with the biggest one of them all: Donald Trump was elected the 45th president of the United States in one of the biggest political upsets of all time.

Even as national polls tightened in the final days, Trump’s chances of overtaking Hillary Clinton’s Electoral College advantage seemed nearly impossible according to nearly every media model, poll and pundit. FiveThirtyEight gave Clinton a 71 percent chance of winning. The Huffington Post gave her a 98 percent chance.

After most states went their expected route as Tuesday night wore on, the key battleground states fell like dominoes. One after another for Trump. Ohio, Florida, North Carolina and Iowa all turned red, severely narrowing and eventually cutting off any avenue to a Clinton victory.

So how did he do it? How did he sweep his way to the White House against all odds? And why didn’t we see it coming?

That right there is the first reason. No matter how many times we ended up being wrong, we underestimated Trump’s strength time and time again. From the beginning, no one would take him seriously. After joining a list of 16 other candidates, he surged to the top of the polls.

After every controversial statement he said, we thought he was done. Yet he remained. After every backstory emerged that would sink any other candidate, he remained. After a movement in his own party spent millions of dollars to derail his campaign, he held firm. After a scathing review and utter dismissal on national TV from Mitt Romney, he didn’t budge.

And after a tumultuous summer, lackluster debate performances and a swath of damaging October surprises, he left Clinton in the dust, causing the Democrats their largest electoral defeat since Mike Dukakis in 1988.

Trump hardly ever faltered because he developed an incredibly large and loyal base. While known for not being specific on policy, it is actually policy highlights that contributed to his success. His main talking point — “building the wall” — was actually only the fourth biggest issue for voters Tuesday, according to an ABC News poll.

While his harsh stance on immigration earned him and a lot of his supporters criticism for being racist, xenophobic and bigots, the issue that won him over with so many Americans was the classic “jobs and the economy,” which still ranked as voters’ top issue on Election Day. There are a lot of areas around the country that haven’t shared the fiscal improvement seen nationally that the federal government touts. And those people in those areas came out for Trump.

The economic point Trump latched onto and didn’t let go of was trade. Trump has been the unchallenged master of blaming trade deals like the North American Free Trade Agreement (NAFTA) for closing tens of thousands of factories and shipping jobs overseas over the last few decades, leaving the industrial heartland of the Great Lakes in economic shambles. He has often referenced Carrier air conditioner manufacturing leaving Indianapolis and Ford moving its small car production from Detroit to Mexico. While NAFTA is a vastly complicated affair regarding its effects on outsourcing, 44 percent of Americans say the deal has been bad for the U.S. economy.

Trump’s constant rhetoric on trade deals and manufacturing job losses touched a nerve with white blue-collar workers in some of the hardest hit areas of the Rust Belt. Many white working-class counties in the upper Midwest that favored Barack Obama in 2012 voted for Trump. In Michigan alone, Trump flipped 12 counties that Obama won four years ago.

Trump is not the only one who capitalized on trade deals. Bernie Sanders was the Democratic champion of Rust Belt blue-collar workers. He was the pioneer opposition to Obama’s proposed Trans-Pacific Partnership trade deal, an initiative Clinton called the “gold standard” but also throughout the campaign said she opposed it. Sanders ended up winning Wisconsin and Michigan in the Democratic primaries; as NBC’s Chuck Todd said at the time, those losses for Clinton were “not a red light, but a yellow flashing light.”

But on Election Day, the light didn’t just turn red: The road closed. Democrats often refer to the upper Midwest as their “blue wall,” but Trump’s trade message was able to not just crack it, but tear it down. He carried Pennsylvania, Wisconsin and looks like he will carry Michigan, states that Republicans haven’t won in generations. Those states, along with Ohio, are what put him over the top.

While trade served as an engine, Trump’s most obvious characteristic and appeal — that he was a Washington outsider — proved to be the wheel that drove those working-class voters to the polls. For years, presidential candidates have thrown around that title, claiming themselves as one. But never having held any political office is as about as outside as you can get.

Again and again in the primaries, polls found voters wanted an outsider. Not because they were merely dissatisfied, but because they were downright furious at the federal government. They were mad that the United States seems to extend its hand to the rest of the world in a heartbeat but leaves its own citizens out in the cold. They felt that Washington has asked everything of them, while giving nothing back. They believed their representatives have spent too much time telling them what to do and too little time listening.

They are “the forgotten men and women” that Trump has talked about, whether it’s Columbiana County, Ohio, where a 42 percent manufacturing job loss in 14 years has left neighboring Youngstown a depressed shell, or McDowell County, W.V., where the life expectancy of adult men is on par with Ethiopia. Trump won both of those counties with nearly 70 percent of the vote.

Not all of them want to see walls built or entire groups of people banned. They want someone who isn’t part of the system because they are convinced that those who work in the capital have become completely disconnected with the struggles that middle-class families endure day after day.

And Trump’s opponent was everything he wasn’t. She was a carefully spoken politician; he held nothing back. He had a populist backing; she was the symbol of the establishment.