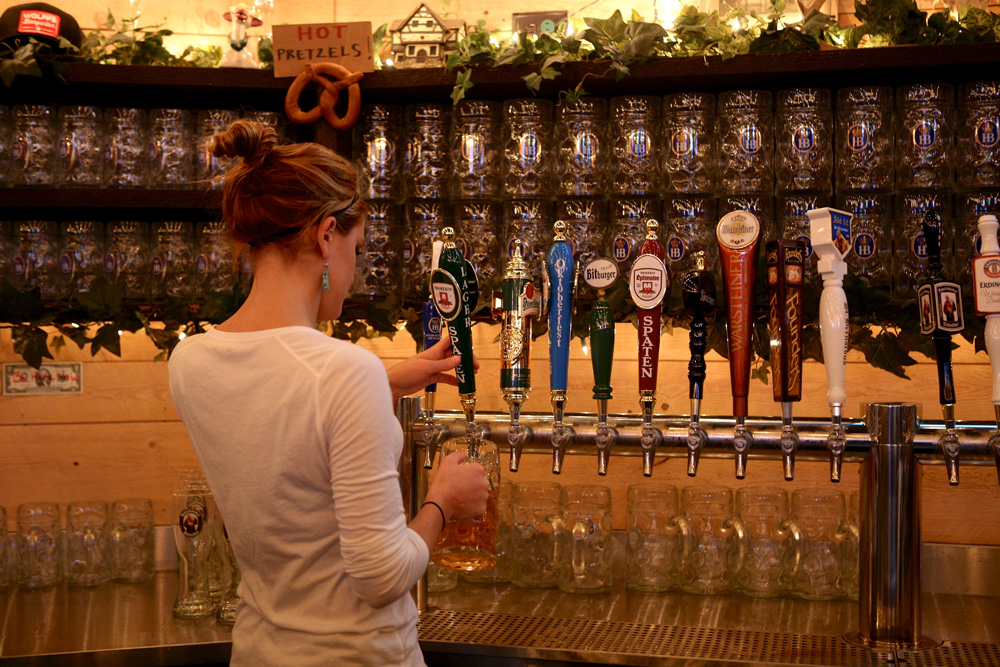 The best spots to get your local beer fix for the holidays.

It’s beer o’clock somewhere, the saying goes. You can get beer any time of day at the gas station, the grocery store and the neighborhood bar.

Want to kick it up a notch in the beer department? There’s a host of new places with an emphasis on local and regional craft beer (and imports, too) around Central New York. It’s the holidays, so tap the possibilities. Wolff’s Biergarten: This Albany-based beer-drinking and soccer-watching destination opened at 106 Montgomery St. last month, with 20 beer lines and a list of mostly German and other European “bier” selections not usually found in other bars. If you were around in the 1970s, you remember the spot as the Firebarn Tavern. It’s casual and comfortable, with long picnic tables and bins of roasted peanuts on each table — just toss the shells on the floor. Tables encourage mingling and people of all ages were enjoying beer and conversation when we stopped in on a recent weeknight. The bar accepts cash only, however, with ATMs on site. 299-7789, wolffsbiergarten.com.

The Evergreen: “Crafted drink and local fare” have a new home at this Hanover Square spot, which opened in November. The Evergreen has a frequently changing lineup of 20-something beers on tap, plus upscale tavern-comfort food (including vegetarian options) made with locally sourced ingredients. Have a craft beer you’re particularly fond of? Put in a request and they’ll try to get it in the rotation for you. The Evergreen is at 125 E. Water St., in the spot formerly occupied by Bull and Bear Pub. 870-3500, theevergreen.co.

Finger Lakes on Tap: The former Creekside Books on 35 Fennell St. in Skaneateles was once a destination for tomes and coffee. Now it’s a destination for a wide variety of craft beer from across New York state and the Northeast, as well as brews of the world. Represented are Abandon Brewing and Climbing Bines (Penn Yan), Empire Brewing Company and Middle Ages Brewing Company (Syracuse), Brewery Ommegang (Cooperstown), Keuka Brewing Company (Hammondsport), Ithaca Beer Company (Ithaca), Upstate Brewing Company (Elmira) and others. There are about 60 taps for beer, plus a couple reserved for hard cider. Hungry? There’s a short food menu, with soup, sandwiches, salads and items to share, such as fondue, meat and cheese plates. Finger Lakes on Tap opened in November. Hours are Wednesdays to Saturdays, noon to 10 p.m., and Sundays, noon to 8 p.m. 685-9600, fingerlakesontap.com.

Local 315 Brewing Company: Looking for craft beer in a more rural setting? Local 315 Brewing Company is on a Warners hops farm owned by the Mathews family. The tasting room has about a dozen beers on tap. Take the chill off with the Winter Warmer, a honey, ginger and cinnamon-infused ale that, at 12 percent alcohol by volume, will warm you up. Bring your own glass growler for a fill-up or pick up a “crowler,” the latest in portable beer. It’s a 32-ounce aluminum can filled and sealed for you to take home. Local 315 Brewing, 3160 Warners Road, is open Fridays, 5 to 9 p.m., Saturdays, noon to 8 p.m., and Sundays, noon to 6 p.m. 382-2051, local315brewing.com.

Finger Lakes Beer Trail Passport: Got a craft beer lover on your holiday gift list? The 2016 passport ($20) is your ticket to fun and savings, with more than $475 worth of discounts on tasting fees, growler fills, merchandise, accommodations, transportation and more at 52 breweries, brew pubs, tasting rooms, craft beer stores and lodging establishments along the Finger Lakes Beer Trail. Visit fingerlakesbeertrail.com or info@fingerlakesbeertrail.com.

Free Will Astrology
Mid-December Events 'Staged' in CNY
To Top