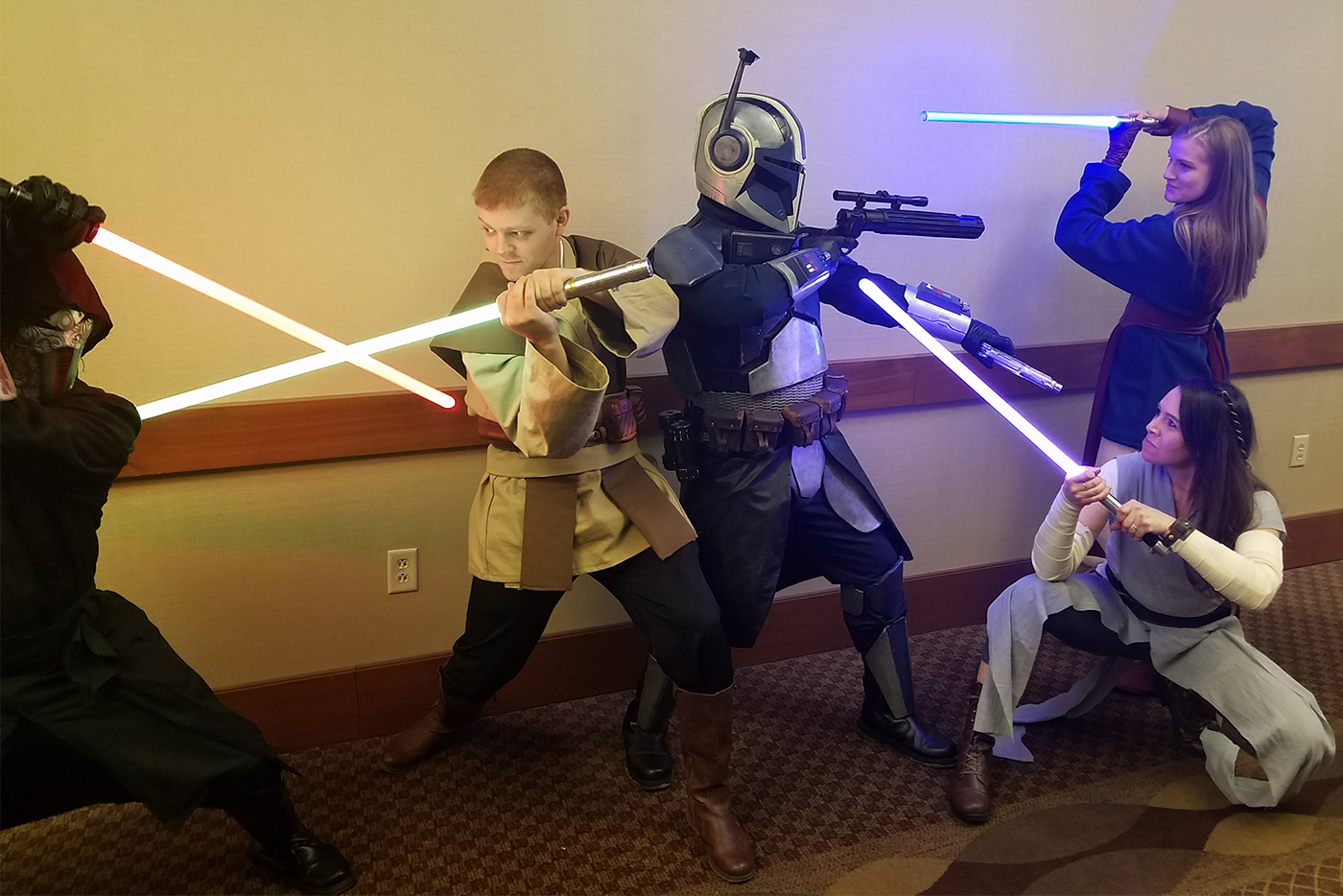 Before we get too far into this week’s topic, I want to make it clear that I am not one of them. Yes, I have my own Winnie-the-Pooh suit and my own Dorothy (from The Wizard of Oz) pinafore with accompanying pigtail wig.

If you’re inclined to do background checks, I’ll save you the trouble: I once — and only once — paraded about Chittenango as a super-sized Munchkin. I’ve also appeared before children as a potato, a faux elephant and many years ago, when I was still green, I wore a banana suit to a strawberry festival.

But there’s a critical difference between me and those who dress up as Batman, Spider-Man and other pop culture characters and attend these things called “comic-cons.” See, I only wear costumes when I lose a bet or I’m desperate for a column idea.

“You wouldn’t know from seeing me that I’m black,” enthused Nick Morman, 24. “You would know that I’m just Spider-Man. You get a day to be not you, and it’s awesome.” Kramer pals around with a bounty hunter, of sorts.

It was tempting to break the news to Nick that he was still Nick — just Nick in a homemade Spider-Man suit — but that would have killed the magic. After all, we’re talking about a cosplayer so devoted that only the night before he helped his grandmother find her sewing machine so she could make his mask. We may never know how many innocent lives Grandma saved with her speedy seamstressing. An indebted nation thanks you both.

My understanding of cosplaying was further enriched by a young woman named Desirae. She explained that she was dressed as Claire Redfield from Resident Evil — Code: Veronica. I had no idea what she was talking about.

“Claire has her own game in Code: Veronica,” explained Desirae, a technician at Valvoline in Rome. “She is kind, caring and she makes sure nobody gets hurt and stuff. She was looking for her brother. She got captured and put on an island and she had to escape from the island with a guy named Steve. They ended up in Antarctica in a laboratory and her brother came to rescue her. It’s pretty crazy.”

There were a few strained interactions as I worked the hall. At one point I approached a 20-something wearing red shoes and a two-tone quilted hoodie with a weird symbol on the front.

“What character are you?” I asked.

“I didn’t dress up as anybody,” he said.

Another time I complimented a teenage girl on her costume. She was dressed in gender-bending fashion as Draco Malfoy, the Harry Potter character. I guess I was just trying to boost her spirits after she confided to me that Draco’s father is a Death Eater, which kinda sucks.

“It’s an eye-catching outfit,” I said. “Did it take you a while to put it together?”

“No,” she said, fixing me with a penetrating stare. “It really didn’t.”

But those were exceptions. All in all, the cosplayers were a genial bunch, so much so that I found myself almost — repeat: almost — envying them for their playful, uninhibited ways. Even Darth Vader was feeling it.

“Geeks have so much more fun,” Darth crowed.

First-place winners in the men’s, women’s and children’s categories received $50. Nine-month-old Helen Ada, as Baby Princess Leia, was voted Best Kid and pocketed another $50 as “The People’s Choice.”

I’ll confess to a twinge of jealousy when a Central Square teen, Haden Johnson, dressed as Ruby Rose, whoever that is, won second place and claimed the Avengers waffle maker as her prize. Like, seriously, if you’re already packing a high-caliber sniper scythe, an Avengers waffle maker strikes me as overkill.

Then again, what do I know? The only superhero I feel a kinship with is Elective Surgery Man, who was killed off by Marvel before the first issue hit the stands.

Maybe I should have worn my Pooh suit, after all, and entered the contest, but I’m over it. Our kitchen cabinets are jammed with useless appliances anyway. Besides, what Syra Con was really about was making new friends and reconnecting with old ones, all with a higher purpose in mind.

As John Ashton Cartin of Elmira, aka Batman, put it: “I may not be fighting crime, but I’m fighting something. I’m not sure what.”