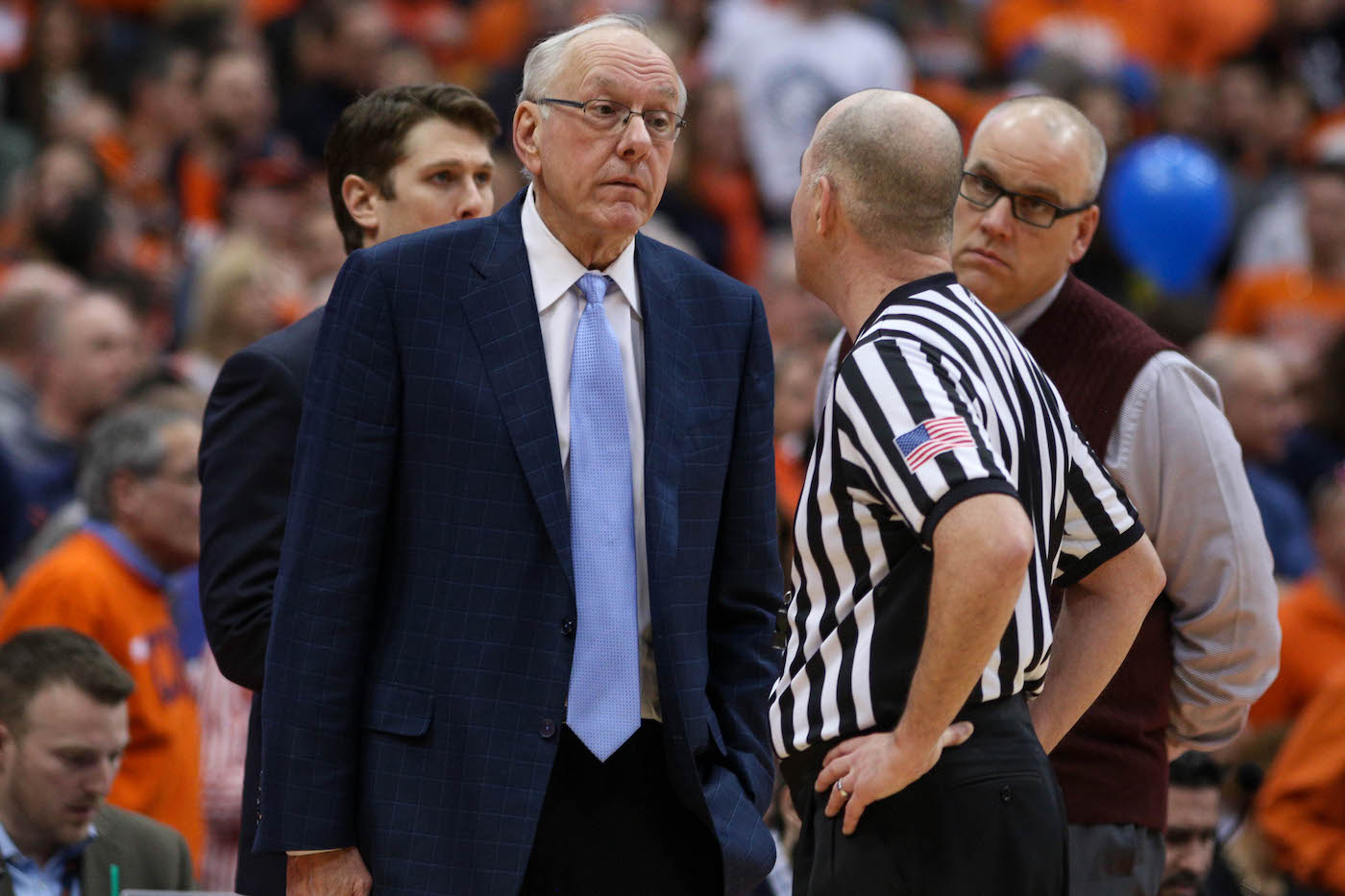 SU gets No. 1 seed in NIT after having bubble burst.

By the time you read this, the city of Greensboro, N.C., will have had the last laugh, or the Syracuse University men’s basketball team will have a reason to smile again.

On Tuesday night, March 14, the Orange was set to face the University of North Carolina at Greensboro in the first round of the 32-team National Invitation Tournament at the Carrier Dome. (The Syracuse New Times went to press before the game was played.) If Syracuse won, the Orange will face the winner of Tuesday’s first-round game between Monmouth College (27-6) and the University of Mississippi (20-13) this weekend at the Dome (the date and time was not announced before press time).

As its consolation prize for being the NCAA Tournament Selection Committee’s 69th team for a field of 68, the Orange received the No. 1 overall seed in the NIT. The NIT Committee showed a sense of humor by matching the Orange with UNC Greensboro following Syracuse coach Jim Boeheim’s comments about Greensboro at last week’s Atlantic Coast Conference Tournament.

After the Orange’s 62-57 second-round loss to Miami, Boeheim was asked about the tournament being moved from Greensboro to the Barclays Center in Brooklyn. Boeheim insisted the tournament should be played in major media markets, saying “There’s no value to playing in Greensboro. None.” He later added, “And I’m saying all these things because I don’t give a shit. I’m just saying what’s right. And that’s right.”

The city of Greensboro counter-punched on its Twitter account: “We kindly disagree. But I guess you can lose in the first round anywhere. At least it’s a quick ride home.”

“We didn’t even have that in our minds,” Minton said. “We were matching teams against teams, not storylines against storylines. That’s the way it played out.”

The way it played out for the Orange was that when you put yourself on the NCAA Tournament bubble, you win some and you lose some. The Orange won last year and became the first No. 10 seed to advance to the Final Four.

This year, you could make a strong case that Syracuse was more deserving than several tournament teams, including USC, Vanderbilt and Wake Forest. But despite a 10-8 record in the best conference in the country (the ACC), the Orange couldn’t overcome its 2-11 record away from the Dome, and it couldn’t escape its ugly non-conference losses to St. John’s, Connecticut and Georgetown.

“I think the one thing to look at with Syracuse, and any team, is the full season,” NCAA Tournament Selection Committee chair Mark Hollis told Westwood One radio. “We don’t break down conference records whatsoever. And as you’re looking at Syracuse, they had two wins away from the Carrier Dome. And that was a challenge for them.

“Also, as you look at their non-conference schedule, one that was not ranked very high on the strength of schedule, they went 8-5 during that process,” Hollis continued. “So, as you take those two components, those were two examples of things that were in the Syracuse full-season evaluation that weren’t in the same conversation as teams we were looking at in the ‘under consideration’ pool.”

Boeheim made a strong case for the Orange after its loss to Miami, pointing out that the Orange defeated six teams in the top 50 in the RPI (Ratings Percentage Index), one of the tools used by the Selection Committee. USC, on the other hand, hasn’t defeated a team with a winning record since Jan. 25.

Even Boeheim’s old nemesis, former Georgetown coach John Thompson, said the Orange should have been in the NCAA Tournament.

“You’re forcing me to do something that I find very difficult to do (agree with Boeheim),” Thompson said on Westwood One. “I think what Jimmy said definitely has a lot of credibility. And if you were to ask coaches that are in (the NCAA Tournament), none of them would love to play Syracuse.”

When he met the media after the selection show this past Sunday night, Boeheim had either cooled off or did not want to say anything that would create another firestorm. Calmly and quietly, Boeheim said his team couldn’t overcome its poor non-conference record, and he was disappointed for the players, particularly the five seniors.

Syracuse is making its 13th NIT appearance overall and sixth under Boeheim, who has led the Orange to 32 NCAA Tournament appearances in his 41-year tenure. The Orange twice reached the NIT Final Four at Madison Square Garden, losing to Tulsa in the 1981 championship game and South Carolina in the 2002 semifinals.

If Syracuse defeated UNC Greensboro, tickets for the next NIT game at the Dome will be available through TicketMaster.com.

The Syracuse women’s basketball team is one of only 14 teams in the country to advance to the second round of the NCAA Tournament in each of the past three seasons. If the Orange does it again, SU’s reward will be a rematch with the mighty Connecticut Huskies.

The Orange (21-10) received an eighth seed in the Bridgeport Region and will face Big 12 Conference-member and No. 9 seed Iowa State (18-12) in the first round of the tournament Saturday, March 18, 1:30 p.m., at Gampel Pavilion in Storrs, Conn. If Syracuse wins that game, it will face overall No. 1 seed UConn, which faces No. 16 seed Albany Saturday with absolutely no chance of losing that game on its home floor. The second-round game will also be in Storrs.