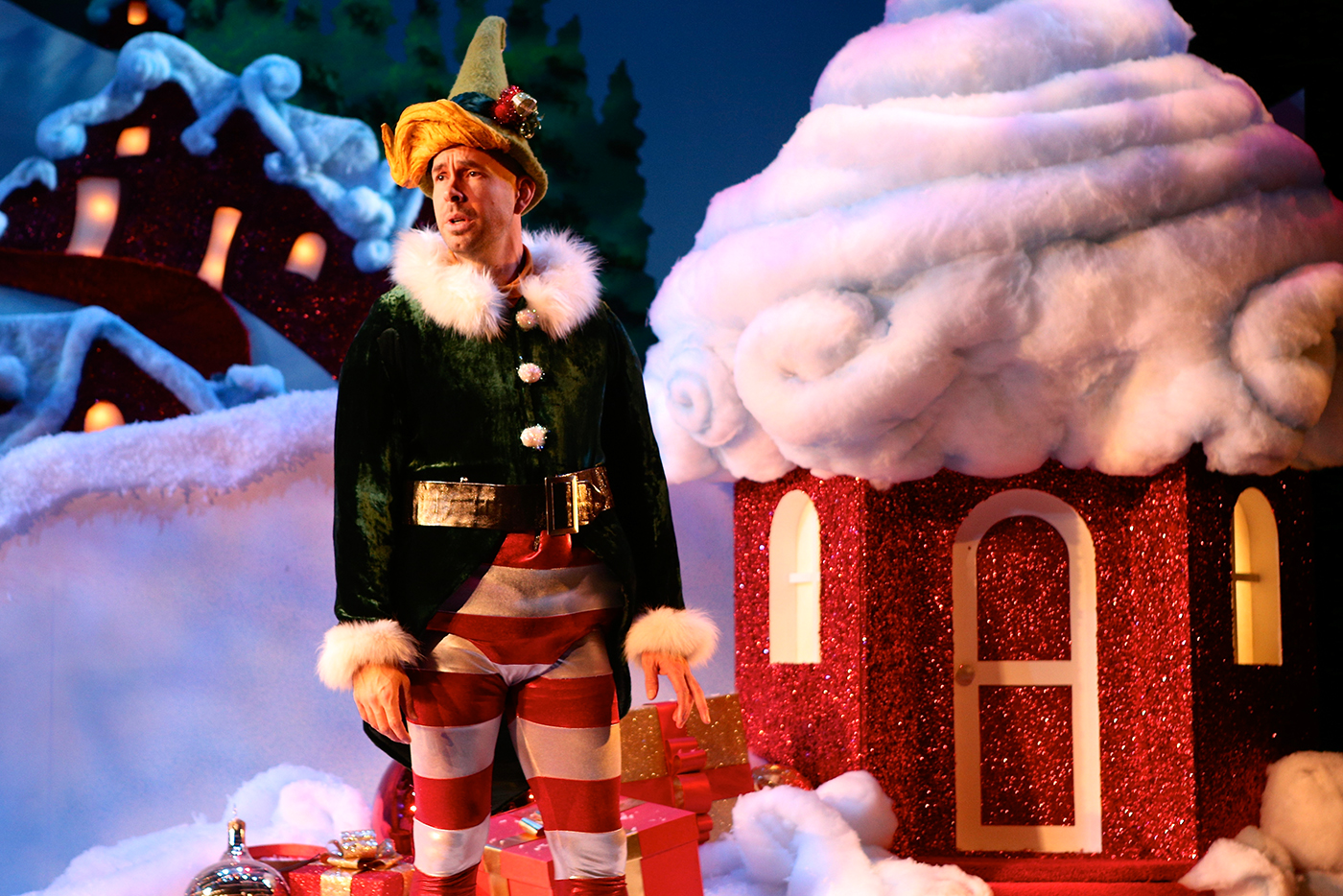 Syracuse Stage rings in the yuletide with “The Santaland Diaries.”

For those in a “bah, humbug” alternative mood during this yuletide season, humorist David Sedaris’ The Santaland Diaries provides a big swig of curdled eggnog.

It’s the second holiday show from Syracuse Stage, with Santaland performances taking place at the intimate Storch Theater. Santaland lends an acerbic antidote to the cheerier musical Pan, featuring many students from the Syracuse University Drama Department, now playing to often sellout audiences next door at the Archbold Theater. Sedaris vaulted to fame with Santaland’s skewed take on the holiday season, culled from his firsthand misadventures as a department-store costumed elf. The show dates back to an essay that Sedaris first read on the air for National Public Radio in 1992. As the Sedaris essay grew in popularity, Broadway director Joe Mantello adapted and helped shape the satirist’s words for a one-person stage show in 1996.

As director Wendy Knox’s production opens, Sedaris’ alter ego (played by Wade McCollum) is dressed in street clothes as he explains to the audience about his current plight. He’s an unemployed 33-year-old actor with dreams of soap opera glory, yet he must endure an audition for an elf role for the Santaland display at Macy’s Manhattan mega-store.

Although there is “a real possibility that I might not be hired,” plus the prospect of failing a mandatory drug test (“My urine had roaches and stems floating in it!”), the wanna-be actor lands the gig. After all, it sure beats being a dog walker, or wearing a french fry costume on a Big Apple street corner.

The actor is then shown donning the elf outfit — complete with candy-cane leg stockings and a silly hat with a brim that looks like Donald Trump’s pompadour — to become Crumpet, an onstage transformation that manages to be humiliating, humbling and hilarious. Meanwhile, the curtain opens to reveal the majestic backdrop devised by scenic designer Jessica Ford, a Hallmark-styled Christmas-card confection that will provide the visual counterpoint to Crumpet’s cynical rants.

Crumpet dishes on the intensive training to become a Macy’s elf, with a sense of “forced merriment” required to ensure the happiness of Christmastime shoppers. There are also Macy’s rules and rituals that must be obeyed; those who have worked in retail will nod in knowing approval regarding some of Sedaris’ exacting details. The anecdotes fly fast and furious, most of them funny along with some pointed material leavening the mirth, as the show moves ahead to Crumpet witnessing a surprising reaffirmation of the holiday spirit on Christmas Eve.

Sedaris’ observational humor is enhanced by the caustic voice imitations from McCollum’s Crumpet. The actor morphs into a roster of boorish-customer types who seem to act like demented denizens from a Mad Max flick, such as the Jersey jerk who tells Santa, “I want a broad with big tits.” Meanwhile, his wife, with her arms folded over her small breasts, stands nearby in stony silence. McCollum also tackles the voices of ditzy teens, store employees and even Billie Holiday, with the actor’s mastery of deadpan drollery always in sync with Sedaris’ confessional storytelling.

Syracuse Stage first brought The Santaland Diaries to the 2008 holiday season with director Knox and actor McCollum, with those same creative forces returning for this smooth encore. Knox favors sassy speediness and steadfastly avoids sentiment for this production, which zips by in about 68 minutes without an intermission.

And Santaland could work the same magic for McCollum that Mark Twain Tonight did for Hal Holbrook (albeit with a much shorter window of seasonal availability), as McCollum delivers the Sedaris goods with high energy, precise comic timing and a commanding authority. Indeed, it’s hard to believe that this is only the third engagement that McCollum has worn the Crumpet outfit. With 14 more performances to go, McCollum’s workhorse turn at Syracuse Stage is one Christmas gift that keeps on giving.