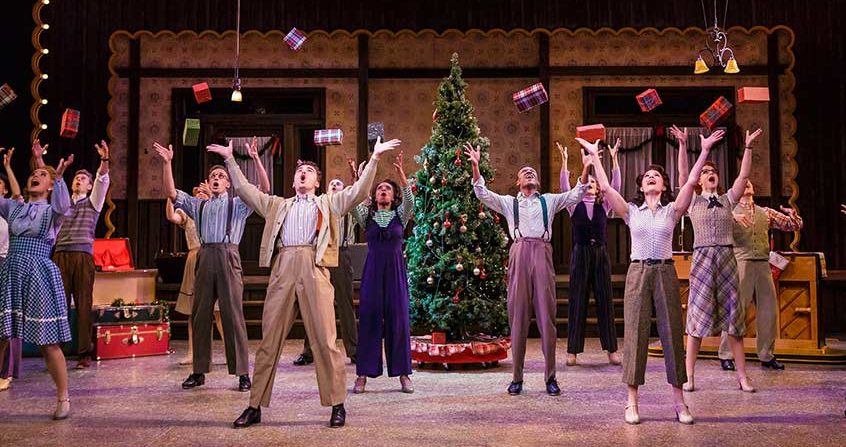 Music from the golden age of pre-rock composers is still played all the time, but many of the best numbers are buried in shows too stumbling to revive. The plan has been to rewrite the shows, dropping the dud songs and drawing new ones from the composer’s backlog, and turn the whole thing into a dance musical.

The film’s paper-thin premise is that the Crosby character, jilted by his original girlfriend, should be running a country inn in Connecticut that produces shows only on holidays, even Washington’s Birthday. In some ways the movie was a jukebox musical before the term was invented because Berlin stuck in “Easter Parade,” written a decade earlier.

The prominent hit of the film was “White Christmas,” the biggest-selling single of all time, more poignant than other Berlin fare, presumably because it incorporates the pathos about the beginning of World War II. It is the title number in White Christmas, the 1954 remake of Holiday Inn, but although it appears twice in this version the song feels more like a distraction than a centerpiece. You can’t dance to it.

When Lila Dixon (Julie Kavanagh) goes off with dancer Ted Hanover (Benjamin Mapp), song-and-dance man Jim Hardy (Ben Mayne) retreats to his dreamy but decrepit farmhouse in the Connecticut boondocks. Soon he meets high-spirited local Linda Mason (Jennifer Evans), who failed in her attempt to break into show business. Together with resourceful farmhand Louise (Kate Chapman), they decide to turn the venue into the holiday inn of the title. Not a whole lot of tension here. Even the departed Lila and Ted come back to join in the fun, with no hard feelings.

The real stars of the show are veteran music director Corinne Aquilina, director-choreographer Richard J. Hinds, and costumer Tiffany Howard. Although musical theater buffs usually rank Irving Berlin down a notch from George Gershwin, Cole Porter and Richard Rodgers, Aquilina pushes him back up with the opening numbers, “Steppin’ Out with My Baby” and “I’ll Capture Your Heart.”

Hinds, warmly remembered from last summer’s Guys and Dolls, also worked on Broadway’s Come From Away. This time his capable hands are filled with no fewer than 12 big production numbers, most of them Berlin standards like “Blue Skies,” “Shaking the Blues Away” and “Cheek to Cheek.” Along with these is a female chorus number, the lesser-known “You’re Easy to Dance With,” in which Ted updates the slot originally given to Astaire.

The most eye-filling number is “Easter Parade,” in which costumer Howard meticulously recreates the Christian Dior “New Look” of 1947, the year in which the music is restaged. Although the program says that Holiday Inn now belongs to Universal Pictures (which owns most of the pre-1948 Paramount talkie catalog), the look of this MGR production is more like MGM.