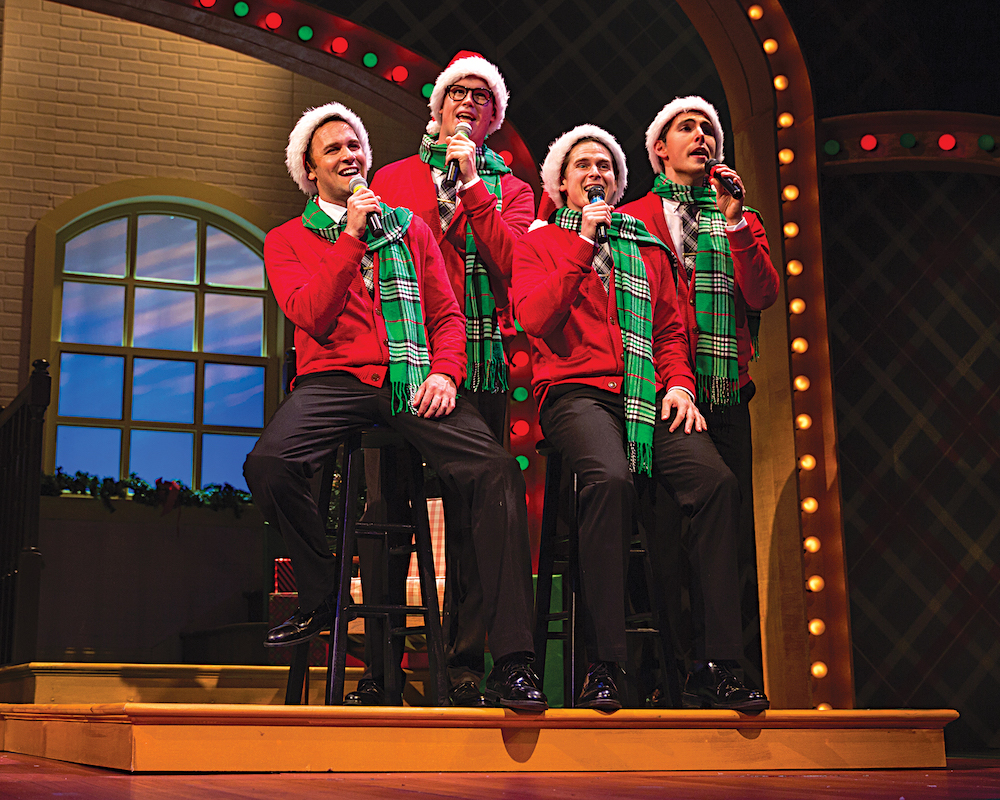 Auburn’s Merry-Go-Round Playhouse finally wraps up its 2015 season with its first-ever holiday-themed show at the Owasco Lake venue.

Despite unseasonably warm temperatures greeting audiences (credit or blame global warming or El Nino), the company planned ahead for inclement weather, with a tented area set up outside for intermission refreshments such as hot chocolate and trips to the powder rooms. In fact, MGR intends to similarly stretch its 2016 season, with the musical Smokey Joe’s Café already penciled for Nov. 2 to 19.

And if MGR schedules a show so deep into its season, audiences will likely still show up. They are certainly turning out for Forever Plaid: Plaid Tidings, in which the red and green holiday lighting for scenic designer Kevin Judge’s stage backdrop correlates with the performers’ plaid apparel from costume designer Tiffany Howard, which includes socks, bow ties and cummerbunds.

Stuart Ross’ 1990 off-Broadway hit Forever Plaid paid tribute to the clean-cut, close-harmony male quartets from the 1950s rock’n’roll era, in which that musical style became instantly old hat following the 1960s British invasion of moptopped rockers from across the pond. The slender plot concerned the fictional foursome known as The Plaids, a struggling guy group who, while on their way to an airport cocktail lounge to debut their act, fatally collide with a busload of young Beatles fans (Catholic schoolgirls, no less) on the way to a February 1964 broadcast of The Ed Sullivan Show. The plot provided enough of an excuse for the vocalists, who have returned from the heavenly cosmos to perform their planned gig, to warble more than two dozen songs for a tuneful listen down memory lane.

Ross’ 2001 follow-up Plaid Tidings was reportedly written as a kind of boy-do-we-need-it-now response to the 9-11 attacks. Surefire elements from the Plaid mothership have been pressed into service again, including a calypso medley (with a “Matilda Matilda” audience sing-along) and a three-minute, 11-second lampoon of the endearingly cornball hallmarks found in many Ed Sullivan installments, with everything from jugglers to Topo Gigio, from plate-spinners to Bill Dana.

The premise hasn’t really changed, either, because why spoil a good thing? The Plaids can’t figure out why they’ve been reincarnated redux, until a series of Rosemary Clooney’s spiritual missives from the great beyond reveals that they have returned to perform a yuletide cavalcade similar to holiday-themed variety-show programming from TV’s yesteryear.

The guys are certainly excited from the outset. “Holy cannoli! It could be the biggest comeback since capri pants,” enthuses one Plaid, while another notes, “I’m so excited that I’m sweating through my mom’s dress shields,” which he has underneath his arm pits. Ross has given his quartet some character-defining guidelines: The tall, bespectacled Smudge swigs milk of magnesia, for instance, while Jinx “needs clotting” because he suffers from nosebleeds. Yet they all have to maintain a healthy dose of sincerity because, as one Plaid puts it, “We’re not hip, or even hep.

Unlike some regional shows with cast members who seem to have AARP cards tucked in their cardigans, MGR’s production of Plaid Tidings features performers who are closer in age to their characters. Each has a solo spotlight, such as Billy Hepfinger’s Smudge expertly pulling off a borderline-bittersweet monologue about being a child of divorce, while J.D. Daw as Frankie amusingly launches into a Rudolph the Red-Nosed Reindeer rant. (“What are reindeer games anyway?” he wants to know.) Caleb Damschroder as Sparky and Jason Moody as Jinx enthusiastically round out this show’s pre-fab four.

Music director Jeff Theiss on piano, accompanied by bassist Michael Fittipaldi, lend the right touch of upbeat cheer to chestnuts ranging from “Jingle Bells” to “Let It Snow.” Director and choreographer Douglas S. Hall moves the show at a brisk pace, and he has lots of fun guiding his quartet through the pseudo-rap number “Twuz Tha Nite B4 Xmas.”

Indeed, this production is so smooth that even during a matinee performance when a Perry Como segment experienced some technical difficulties, the cast and audience rolled right along with it. For that matter, one Plaid accidentally referred to Jinx as Jason, and nobody in the audience seemed to notice.