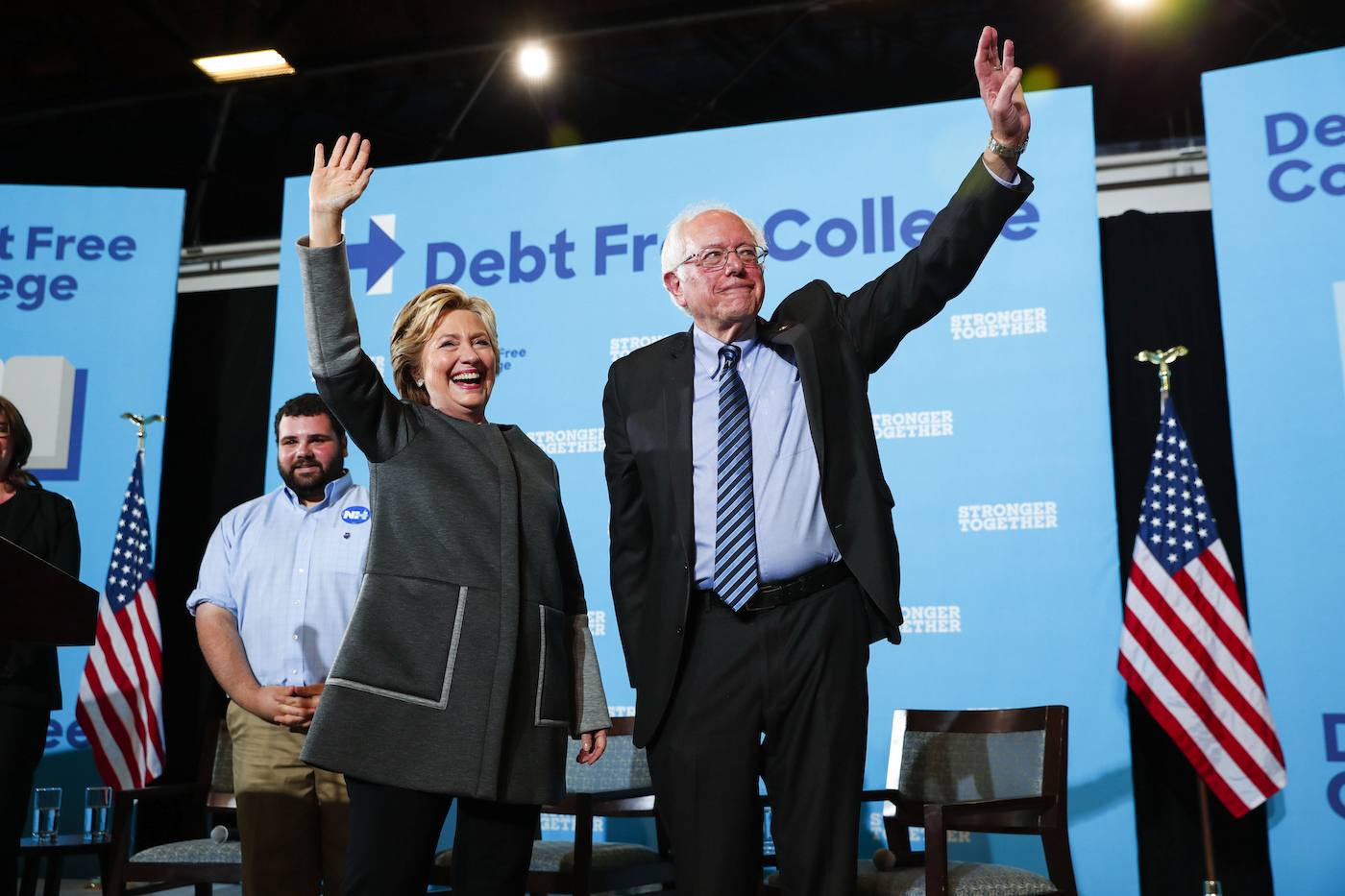 On Sept. 6, 2016, Sen. Bernie Sanders could be seen at his first general election rally for his formal primary rival in Lebanon, New Hampshire.

“On issue after issue, there should be no doubt in anybody’s mind as to whether Hillary Clinton is the superior candidate because in every respect she is,” Sanders told the crowd. “I intend, as a United States senator, to do everything that I can between now and Election Day to make certain that Donald Trump does not become the next president of the United States.”

It was a glowing endorsement after a prolonged and bitter primary contest between the senator and former secretary of state that had exposed divisions within the Democratic Party, which were simmering for some time. Sanders spent a good portion of the fall campaigning on Clinton’s behalf and was arguably her most important surrogate, even more so than Barack Obama.

One year later, instead of being president for the past nine months, Clinton is releasing her new memoir, What Happened, which details her experience as the Democratic Party’s 2016 nominee and, as the title suggests, what caused the opposite result of what she had hoped for. In it, she finally places some blame on herself for her loss. She acknowledged the bad “optics” of giving paid speeches to Wall Street firms and she said her decision to use a private email server — the biggest ghost in the closet that spawned months before announcing her campaign and came back to haunt her just days before the election — was “dumb.”

But also in her book, as we’ve seen multiple times in her public appearances since Nov. 9, she continues to place blame on other factors, including some subtle swipes unlike anything before at the independent senator from Vermont.

“He isn’t a Democrat. That’s not a smear, that’s what he says,” she writes of Sanders. “He didn’t get into the race to make sure a Democrat won the White House, he got in to disrupt the Democratic Party.”

While Clinton talked about how great the 1990s were and how the Obama legacy needed to be preserved, Sanders tapped into the economic anxiety felt by millions of Americans — especially young people — by proposing policies and energy that would blow up the political establishment. He understood immediately that this was an election about passion, not party — something Clinton, judged by her comments, still does not understand.

It’s not just in her book, either. During the heat of the primaries, Clinton accused Sanders of criticizing Presidents Obama and Bill Clinton because “he wasn’t really a Democrat until he decided to run for president.”

It’s unfathomable why Clinton even bothered to use that kind of argument. Maybe ideology played a bigger role 25 years ago, but in 2016. It’s hard to imagine any Sanders supporter went into a voting booth and thought “you know, Bernie just isn’t enough of a Democrat, so I better vote for Hillary.”

Indeed, did Clinton ever stop and wonder why 45 percent of people during the Democratic primaries voted not for her, but for someone who wasn’t even a Democrat?

Well, maybe not, given that she says in her book that Sanders’ personal attacks “caused lasting damage, making it harder to unify progressives in the general election.”

Or maybe it was because of revelations that the Democratic National Committee had rigged the primary process against Sanders, which led to the resignation of DNC Chair Debbie Wasserman Schultz, who was then replaced by a woman who WikiLeaks shows had leaked CNN debate questions to Clinton.

Yes, it’s a real mystery why so many Sanders supporters didn’t vote for Clinton in November.

And as it turns out, those defectors made all the difference — and not just those who voted third party. Newsweek reported at the end of August that the number of Sanders primary voters who ended up voting for Trump in the general was crucial to the billionaire’s victory. In the three states that solidified Trump’s win — Pennsylvania, Michigan and Wisconsin — Trump’s margin of victory over Clinton was actually smaller than the number of Sanders primary voters who gave their general election vote to the Republican candidate. In other words, had a few thousand people in those states who had voted for a Democratic candidate in the primaries voted for a Democrat in November, a Democrat would be in the White House.

It’s no surprise that those three states carry the heart of working class whites who resonated with Trump and Sanders during the primaries and ultimately sided with Trump, leading him to carry all of those reliably blue states. All that did was solidify the Democratic Party’s disconnection with a major part of the electorate, something Sanders saw long ago and something mainstream Democrats like Joe Biden and Chuck Schumer have since acknowledged. The only Democrat who neither recognized it before or after the election is Hillary Clinton.

1939 UFO Sighting In Keokuk, Iowa
A 1936 Abduction Experience in Alma, Michigan
To Top