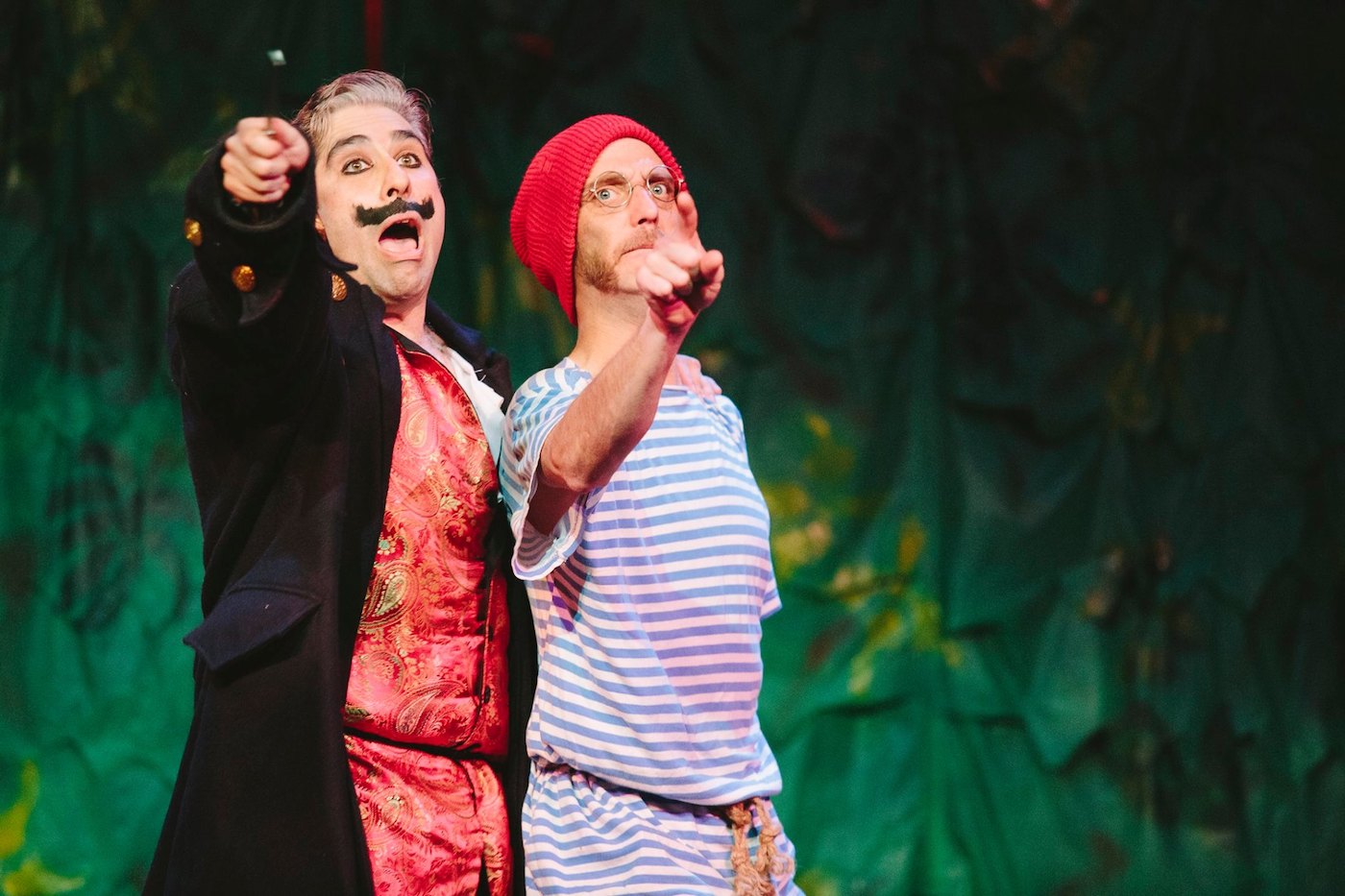 Rick Elice’s Peter and the Starcatcher, running through May 20 as a Baldwinsville Theatre Guild production, is related to Peter Pan somewhat the way the Stephen Schwartz musical Wicked is related to The Wizard of Oz. Both are prequels explaining the origin of details of well-known stories retold in different genres. This time we learn how the pirate in the red coat gets his hand replaced with a hook.

Both shows are also based on bestsellers, and here’s where the great difference lies. Gregory Maguire’s Wicked, aimed at adult readers, is frequently meditative and gloomy, if ironic. But this Peter derives from a series of children’s books by Ridley Pearson and Dave Barry, the latter one of America’s premiere humorists. In more than two hours of rollicking action, Peter and the Starcatcher never goes more than a few moments without provoking laughter.

A second great difference is music. Even though Peter credits a score composed by Wayne Barker, this is more of a spoken word than a singing show. Colin Keating lists himself as both director and music director, and he leads an ensemble of two, himself and percussionist Jennifer Vacanti. Much of the time the two of them are chiming in with sound effects to heighten a scene. What music there is, however, can stop the show, such as the everyone-in-bras (women and men) “Mermaid” number on Mollusk Island. Credit costumers Jodi Wilson and Karen Palinkas with filling the empty bras with found objects like apples and clocks.

Action begins on a bare stage with performers filing in before becoming characters: “I will play a sailor,” or a “Lost boy,” or whatever. Voices ask us to think of dreaming, adventuring, growing, and to imagine the British Empire. A Union Jack unfurls, and with the snap of someone’s fingers, a light goes on and we are transported to a thriving harbor, where we meet officious Lord Aster (Rich Bocek), his precocious daughter Molly (Clare Lopez) and her nanny, Mrs. Bumbrake (Josh Harris). Although Harris speaks in a falsetto, this is not really a drag role. The actor’s trousers are clearly visible below his apron, and what passes for a wig looks like a crimped doily pinned atop his head.

We learn of two identical sea chests. One is filled with the Queen’s treasures, which Aster will accompany on the Wasp, the fastest ship in the fleet, helmed by reliable Captain Scott (Dan Southcott), to the kingdom of Rundoon. The other is a decoy filled with sand and to be carried aboard the rickety Neverland, captained by the suspicious-looking Bill Slank (Casey Callaghan). In a moment of pandemonium, Slank marks the Queen’s trunk with a chalked X and switches the assigned ships.

Short-handed, Slank buys three orphans — plump Ted (Ben Borenstein), tall Prentiss (Evan Biedermann) and resourceful Peter (Ryan Sparkes) — from Grempkin (Seth Kennedy), the schoolmaster of the Lost Boys. Their fate is unknown, perhaps to serve the king of Rundoon, and no one seems to care, prompting Peter to shout that he hates all grown-ups.

As the Neverland is pursuing a safer if slower route to Rundoon, Lord Aster and Molly join it. Aster reveals secrets to Molly in Dodo, a language comprehensible only to them and the extinct bird. He places an amulet around his and Molly’s throats. She must touch it if ever she is in trouble. Molly is also an apprentice Starcatcher. People gain this rank through appointment from the Queen and are commissioned to protect starstuff and deposit it inside the world’s hottest volcano, which is in Rundoon.

Also aboard are seaman Smee (Josh Taylor) and a crew of pirates headed by the red-coated blusterer Black Stache (Matt Gordon). Stache sets out to dominate the action with verbal pyrotechnics, including glorious malapropisms such as “No man is an archipelago!”

Director Colin Keating does not run many shows, but he has a proven eye for quality and talent. Clare Lopez, just arrived in town, makes for a saucy, spunky Molly. Ryan Sparkes, a recent Crane School of Music graduate, evokes Mark Hamill’s Luke Skywalker as Peter. And as Black Stache, Matt Gordon bids to become not just a starcatcher but an actual star.