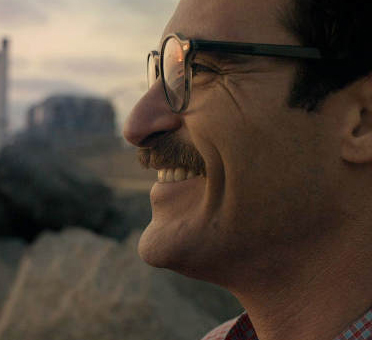 In ‘Her,’ a man learns how to voice his feelings

In Spike Jonze’s future Los Angeles, people walk around with little white plugs in their ears. Some are dancing. Some are skipping. Some are just holding more subdued conversations with their Operating Systems. The exact year is never pinned, but video games have crossed the line into a more virtual reality, too.

(For some reason never explained, either, is the fact that all of the men appear to wear high-waisted pants.)

In “Her,” Theodore Twombly is a writer who composes other people’s letters for them by speaking into his computer. The voice recognition system virtually pins his words on personal stationary, in hand-written and quite real cursive, and then whisks them off to a Cloud or something.

Twombly is going through a divorce. Joaquin Phoenix, in fact, plays him like a cousin to Johnny Galecki’s Leonard Hofstader on TV’s hit comedy “The Big Bang Theory.” Right down to the glasses and an aura of slight confusion about the opposite sex, Theodore is a sensitive soul with a likable quirk or two.

A lonely Twombly decides to purchase the newest Operating System, which promises a virtual little helper that personalizes itself to its owner’s needs.

Theodore answers a few surface questions, and declares that he’d like his voice to be that of a woman. (Lucky guy gets the voice of Scarlett Johansson.) He asks this sensuous new sound if she has a name. And so he meets Samantha.

They become emotionally involved in a way that becomes more than slightly creepy to those of us in the crowded theater back here in 2014, where Siri has yet to develop a unique personality for everybody within the Apple world, and never calls you to talk in the middle of the night.

There are real laughs — and some nervous chuckling — as Theodore and Samantha’s relationship gets way more complicated and he brings her, through the lens in his phone, to more and more intimate places.

The supporting players add little snippets of drama to the tale; Amy Adams is pleasing as the girl in the apartment building going through her own relationship struggle, Chris Pratt is funny as a devoted co-worker, Rooney Mara is complex as the ex-wife, and Olivia Wilde is sexy and striking as a blind date.

But really, the whole world in “Her” centers around Theodore and Samantha, and the multi-layered conflict between intellect, emotion and physicality.

In the end, this decidedly real romance between man and voice teaches Theodore plenty about himself, heart and soul.

Films could concentrate on the here and now
OPENING FILMS: You gotta have Hart
To Top