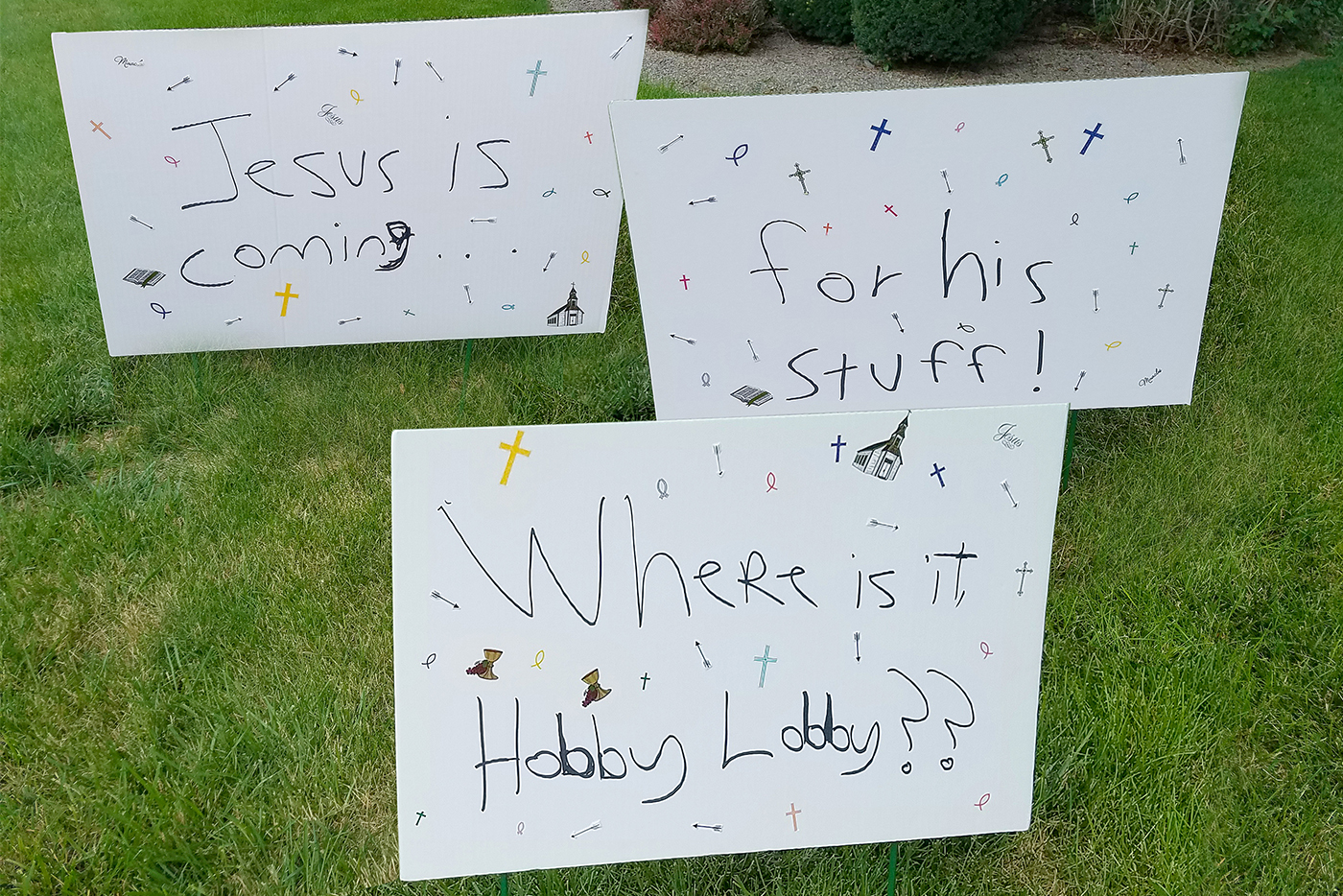 I love doing crafts. So it has been since seventh grade, when Mr. Kemper, who taught Industrial Arts, answered one of my wisecracks by telling the class: “What the hell does Kramer know, anyway? Everything he touches turns to shit.”

Historical footnote: Back in the 1970s, teachers could say those kinds of things without being led away in handcuffs.

Anyway, the reason I’m recalling that exchange is because Hobby Lobby is back in the news, which reminded me that it’s high time to revisit my passion for working creatively with my hands.

Hobby Lobby, as you might have heard, was recently nailed for purchasing biblical artifacts — rare cuneiform tablets and more — despite warnings that the objects might have been looted from historical sites in Iraq. The sanctimonious, Jesus-spouting corporation, a leading supporter of unwanted pregnancy, agreed to return all 5,500 objects and pay a $3 million fine.

That’s a heavy cross to bear following those heady days in 2014 when Hobby Lobby won a Supreme Court case to keep family-owned businesses from being required to pay for insurance for contraceptives under the Affordable Care Act.

So now what? During times like these, when the hypocrisy is so thick you can cut it with a 4-inch multi-angle palette knife, I find that finding the right art project can soothe a troubled soul.

Thus verily did I stop by my neighborhood Hobby Lobby for supplies and expertise regarding the deceptively difficult craft of sign-making. Everything I could possible need was there. Well, almost everything.

Me: Do you have rare biblical tablets from the Middle East?

Checker: Fresh out. (pause) I read about that, too. I’m just a checker. I’m not that high up in the company.

“High up” is a relative term there, of course. According to Hobby Lobby founder David Green’s impossibly dull, self-serving memoir Giving It All Away … And Getting It Back Again, the company belongs to God. Maybe the Supreme Court will rule that He is on the hook for the $3 million.

In any event, my shopping cart runneth over. I made an artistic choice to fashion not one sign but a series of three roadside signs that would reveal more of the message the farther you drove.

Accordingly, I purchased poster board and Stick-a-bil-lities religious icons — glittery crosses and fishes and such. I also bought a black marker about five times the size of one of the smuggled cylinder seals that were used by ancients to roll images onto wet clay. My finished product read as follows:

Panel 2: For his stuff

Panel 3: Where is it, Hobby Lobby?

From there, it was just a matter of devising a mounting system for the panels. Hobby Lobby couldn’t help me there, but at a local hardware store I purchased some sharp-tipped dowels, which I duct-taped to the back of the signs. Then I waited until Sunday — the Lord’s day — to install the signs in correct sequence along East Genesee Street on the approach to the Hobby Lobby parking lot.

As I proudly surveyed my handiwork, I thought about David Green and his book, particularly the chapter titled “Our Ethics Matter.”

“If an agreement to purchase is made, the deal needs to be straightforward and clear: a given product for a given price (hopefully a very good price) by a certain date. Keep it simple.”

Apparently to the Greens — his son Steve is president of Hobby Lobby — “straightforward and clear” means wiring payments to seven separate personal bank accounts and destroying archeological context by taking possession of crucial artifacts from Mesopotamia whose packaging misidentifies the contents as tile samples and misstates the country of origin as Turkey.

My sign supports didn’t work. Hours later when I drove down East Genesee, I saw the poster boards lying in the grass. Pride goeth before the fall — and duct tape has its limits. Might it have been God smiting my labors, a message from Him to turn away from cheap pranks and heed the words of his second-favorite son?

“When we live with our hearts bent in, listening to God,” writes David Green, “and if we live with a heavenly perspective, then we’ll grab hold of eternal things.”