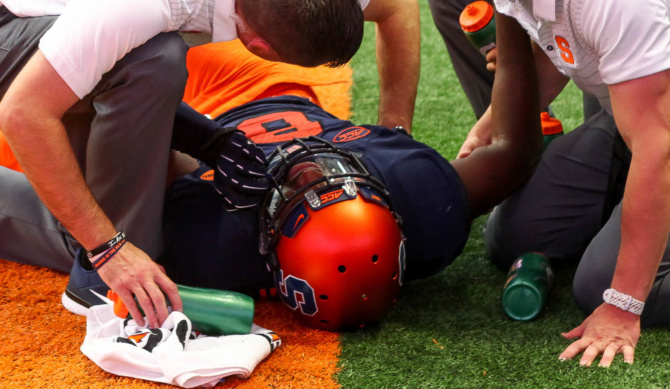 Football season is a time for cool nights under the lights, the roar of the fans fired on by cheerleaders, and coaches fervently hoping to avoid injuries, particularly concussions. Much attention has recently been lavished on this particular sport and its connection to traumatic brain injury, but other sports are hardly exempt.

Liverpool High School graduate and lacrosse player Krystyna Sterio experienced her first of two concussions when she was 15, yet she didn’t recognize the symptoms until days later. A sophomore at the time, she was a member of the Central New York Elite Lacrosse Club and was at practice when she was hit in the head with a ball. Because blows to the head with sticks, balls and even other players are common, she just shook it off. Sterio went down, got up, had a quick interaction with the coaches and continued to play.

“I really didn’t think anything of it,” she said. “Also, there were a lot of college coaches watching us practice so I didn’t want to sit down.”

What Sterio described could be considered a typical day in the life of student athletes given their passion for sports. Eugene Bailey, M.D., school physician for the East Syracuse Minoa School District who specializes in the study and treatment of concussions, would agree. He argues that many concussions go unrecognized or are underreported for many reasons, from delayed symptoms to pressure to play. His goal is to change that.

“I actually went two weeks before I (got) checked out,” Sterio said, even though signs began to manifest themselves the next day during another training session. “We were running and I was getting like a tunnel vision. I just figured it was because I was out of shape, it was off season, so I just again didn’t think anything of it.”

But the symptoms got progressively worse. Headaches and migraines began to surface at home, and the tunnel vision returned during school hours after long periods of focus and sitting under bright lights.

Her parents, Jim and Matina Sterio, were not aware of the lacrosse incident until Krystyna had an a-ha! moment during a conversation 10 days later with her dad, who was concerned with the recent headaches she was enduring. They saw the doctor the next day, and she was put on “brain rest” for three to five days. That meant no TV, no music, no reading, and when possible, no lights.

“I took their advice seriously, even though it was hard,” she said, noting the idea of a brain injury is much more unnerving than a sprained ankle. Her symptoms did eventually subside, but it took longer than it could have had she sought immediate medical attention.

Concussions cannot be diagnosed, but rather recognized through a series of questions given to the patient. A disadvantage to this is that the term concussion is defined many different ways, said Bailey. This makes it that much harder for physicians, athletic trainers and coaches to not only identify them, but also to generate consistent statistics as a basis for further study.

Another significant problem in recognizing sports-related concussions is in the reporting. Unless you observe a play and see a problem, you need to rely on the athlete to self-report, and athletes may neglect to self-report due to pressure or the desire to stay in the game. If they do come forward, it might be a day or two later, or in Sterio’s case, two weeks. Then we’re behind the eight ball, Bailey said.

“Some headaches may go away in 20 minutes, others may not have any symptoms and then 20 minutes later they’re passed out on the field,” he said. “There’s a whole spectrum of signs and symptoms and physiology that makes it difficult.”

About 80 percent of concussions are not recognized, he added. And there’s no consensus on one particular test to recognize them. “You can’t image the brain and find concussion. In fact, images are normal. There’s no blood test. So we have to use tools to make the determination and decision, and that’s basically the whole problem,” he said.

The most recent detection tools, developed through international conferences, to aid in recognizing and evaluating concussions include the CRT5 (Concussion Recognition Tool), SCAT5 (Sport Concussion Assessment Tool) and Child SCAT5 (designed for individuals under age 13). SCAT5 is the most respected test but many consider it too lengthy and cumbersome to be used for a sideline evaluation. “You want something that’s fast,” he said.

ImPACT, an acronym for Immediate Post-Concussion Assessment and Cognitive Testing, is a baseline assessment test used before athletes begin the playing season. Sterio, who played varsity lacrosse as a Liverpool High School sophomore, said she and the other student athletes were given this test prior to taking the field. After her concussion was recognized, she wasn’t permitted to play again until had she repeated the test and the results matched up with her initial assessment.

Bailey said, “Other groups are coming up with other modalities that may better monitor concussion and recovery, but SCAT5 still remains the internationally accepted standard for concussion, recognition and management. If you want to stand up to scrutiny, you will use the most accepted standard and guideline out there and right now that’s SCAT5 and ImPACT.”

Bailey’s goal is to establish an app called easySCAT (more information can be found at easyscat.com) as the standardized sideline assessment for all New York state school districts. He co-created the app with East Syracuse Minoa partnering physician Daniel Rancier and head athletic trainer Mark Powell with the help of other colleagues. The app launched in August and is designed to be used not only for games and practice, but even gym class and recess.

“We’ve taken some of the core recommendations for recognition of concussion and we’ve put them into an application where a coach, school nurse, gym teacher or parent, even, could easily recognize concussion based on up to six tests that are done on the sideline, immediately,” Bailey said. “That information is then stored electronically and can be communicated to all parties interested, (also) electronically, to a secured database.”

East Syracuse Minoa is currently using the app and since its launch 30 schools have signed on, Bailey said. Unlike paper forms, this documentation cannot get lost. In fact, it syncs to a database in the cloud and is immediately accessible to designated individuals. If the entire state were to pick it up, it would also benefit students who relocate within New York because the database would move with them.

“We want to standardize the recognition definition so that every school is doing the same thing,” he said. “Then I want to study it. If we’re finding a school has more concussions now, based on this, we can go in there and find out why. It may be that they don’t have an athletic trainer. It may be that all the schools with athletic trainers are finding more concussions, or we may be finding less when in fact we should be seeing more and that’s because in the past they were just being overlooked. Now they’re not going to be overlooked because we’re going to have something that the coaches can use. We’re excited about it.”

As for Sterio, now a freshman at Rochester Institute of Technology and still an ardent lacrosse player, she also has something to say about recognizing concussion for her fellow athletes: “It’s definitely frustrating, but you have to have patience to stop and notice. Your brain is more important than anything else you’re doing. Don’t worry about the schoolwork or keep playing in a game if you think you might be injured. Your health is first.” SNT