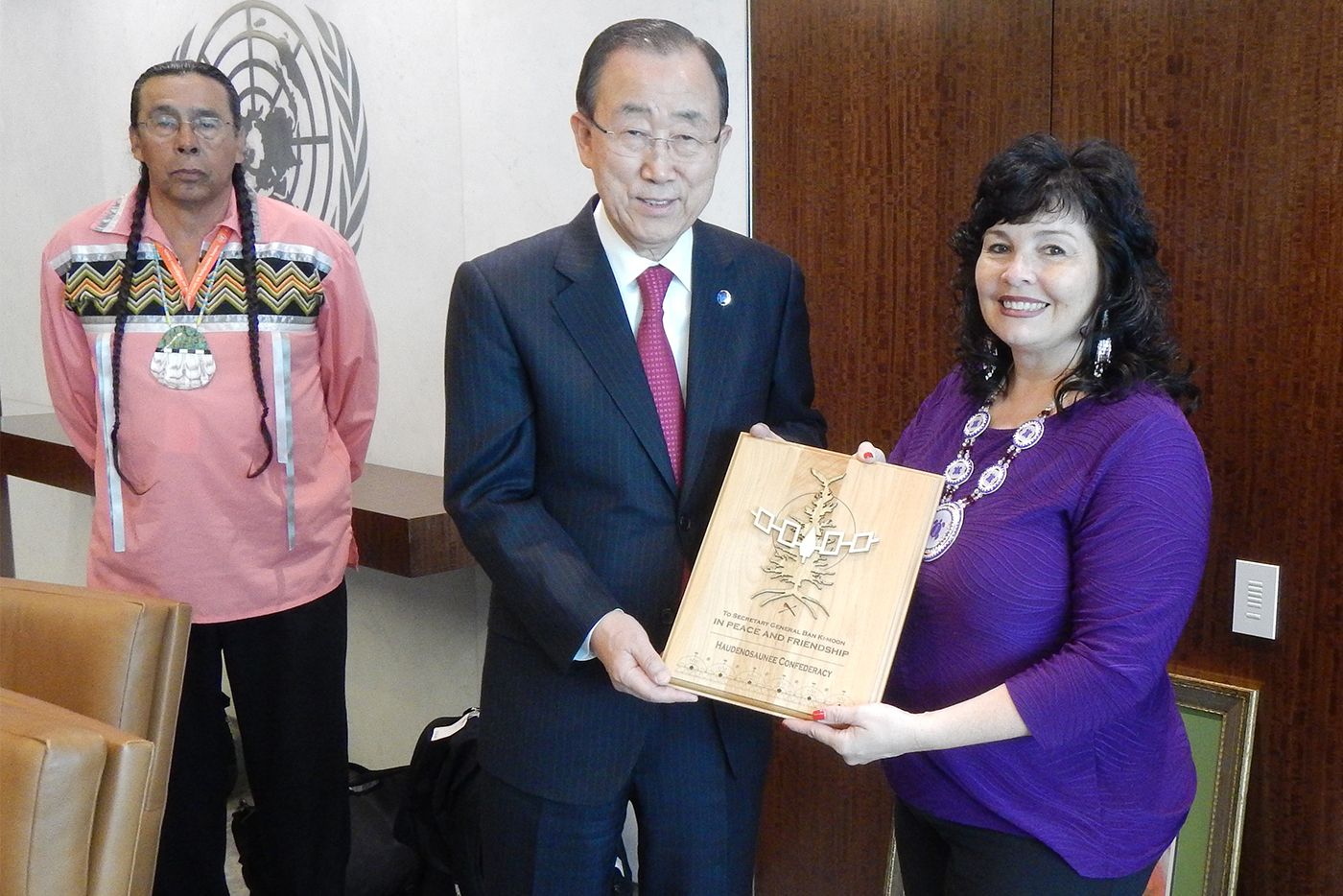 The Haudenosaunee seek a solution to Onondaga Lake crisis.

Four months after Onondaga Nation leaders revealed that New York state’s cap on toxic waste at the bottom of Onondaga Lake had already failed three times, representatives of the Haudenosaunee (Iroquois) Confederacy pleaded with the United Nations to help protect the sacred waterway.

“The greatest lesson this United Nations has yet to learn is that we, the human species, are the environment,” Tadodaho Sidney Hill said in a May 18 letter he gave to U.N. Secretary General Ban Ki-moon. “The United Nations has a responsibility to drop the issues of politics and rise to the principles of survival for all life on Earth.”

Hill was among seven Haudenosaunee leaders who met with Ban Ki-moon about sovereignty, the environment and the role of indigenous peoples at the United Nations. The delegation was in New York City for the 15th session of the United Nations Permanent Forum on Indigenous Issues (UNPFII), a two-week event that drew more than 1,000 indigenous representatives from around the world.

The Haudenosaunee delegation presented Ban Ki-moon with an engraved plaque featuring the Tree of Peace and the flag of the Iroquois Confederacy and a painting of the Tree of Peace by Onondaga Nation Faithkeeper Oren Lyons.

Betty Lyons, a member of the Onondaga Nation and president and executive director of the American Indian Law Alliance, called upon the Permanent Forum to conduct a formal study on “the effects of the man-made devastation of our fresh waters on our relationship as indigenous peoples with sacred waters, and its catastrophic effects on the health, emotional, physical and spiritual well-being of our women, communities, Nations and our youth.”

Indigenous communities are involved with many efforts to protect their lands. Last month, for example, about 200 members of several Native American nations protested the proposed construction of an oil pipeline near tribal lands in North Dakota. Last summer, about 100 Native Americans protested at the U.S. Capitol against a proposed $6 billion copper mine in Arizona at a site that the Apache tribe considers sacred.

“Our indigenous sisters and brothers, while in peaceful protest, are being detained, criminalized, persecuted and killed daily, to protect their homelands from extractive industries and member states in their never-ending quest for the consumption of natural resources,” Lyons told the U.N. session, according to prepared remarks. “Pipelines, toxic waste disposal, mining, dams, and extreme forms of resource extraction, such as hydraulic fracturing and tar sands, cover our original territories and we are left with the devastation.”

Earlier this year, Onondaga Nation leaders and advocates said they were disappointed that the efforts to clean up toxic waste at the Onondaga Lake Superfund site had failed. The sand New York state’s Department of Environmental Conservation put on the bottom of the lake to bury contaminated sediments slid, contaminating another 40 acres of the lake bottom.

The Haudenosaunee have long fought to restore Onondaga Lake and to focus attention on the devastating effects of climate change.

“While we deliberate, the ice is melting,” Onondaga chief Hill wrote in his letter to Ban Ki-moon.