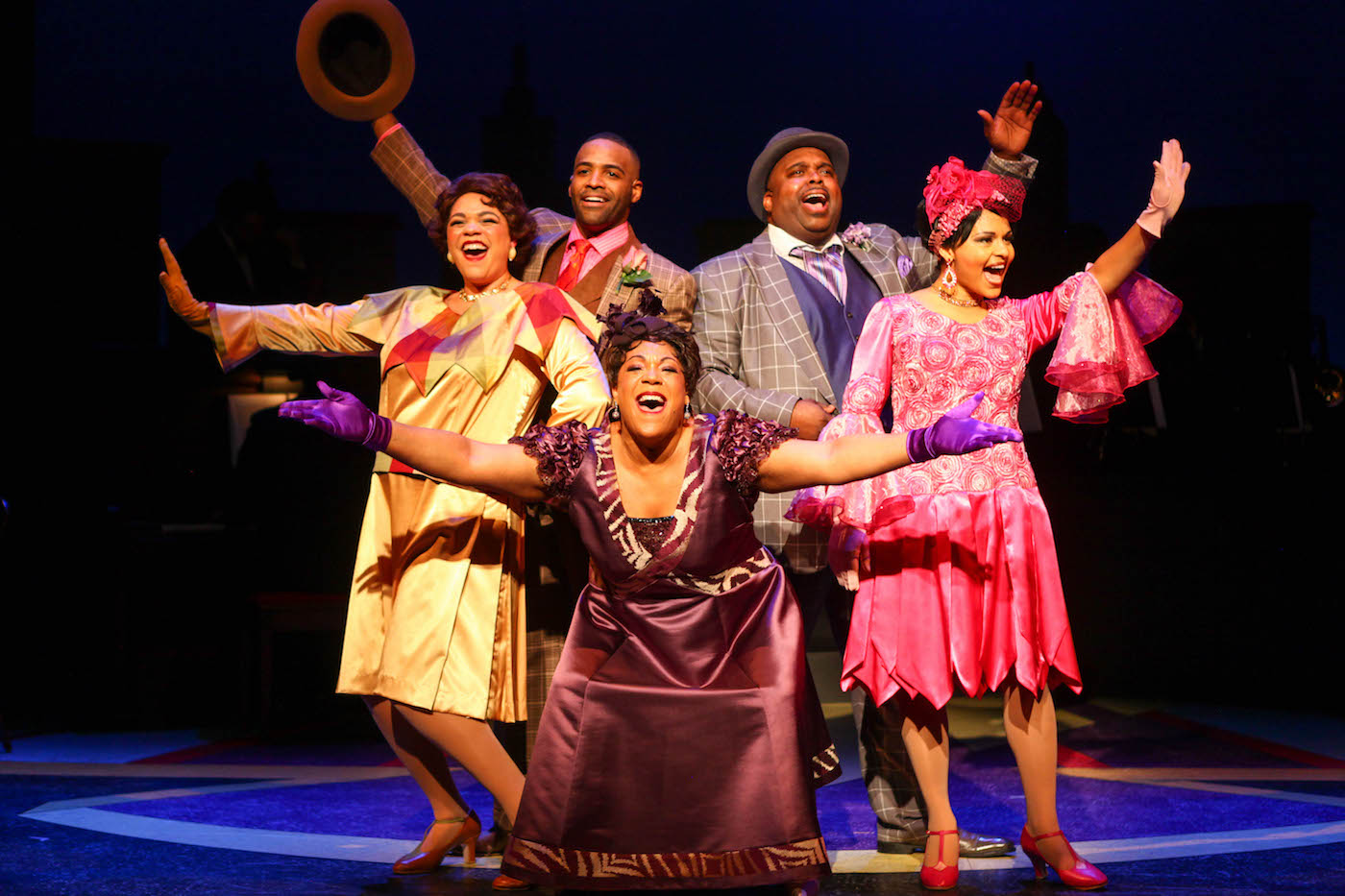 The 1978 Tony Award-winning, box-office smash Ain’t Misbehavin’ did for Fats Waller what Lin-Manuel Miranda’s Hamilton did for the guy on the $10 bill: provoke a re-evaluation. Most people had heard of Waller (1904-1943), but they did not realize how multiform and excellent he was.

The show had been put together by two white men, Richard Maltby Jr. and Murray Horwitz, and asserted that Waller was the peer and sometimes superior of his better-known white contemporaries. The two African-Americans in charge of the Syracuse Stage production (running through March 26), director-choreographer Patdro Harris and music director Chika Kaba Ma’atunde, reassert his voice in the Harlem Renaissance. And that voice sings, as Harris says in his program note, of pure joy.

Harris has often been Syracuse Stage’s go-to man for authenticity. He provided the African choreography for Tim Bond’s direction of The Brothers Size (spring 2012) and earlier choreographed and directed Crowns (May 2009), celebrating the black women’s tradition of extravagant hats.

Useful program notes by Tionge Johnson put Waller and the Harlem Renaissance in context. For the first time in American history, large numbers of blacks had escaped the South’s cotton fields and Jim Crow, to relative freedom and the possibility of affluence in the North. Night spots in Harlem like the Dark Tower, the Cotton Club and Strikers’ Row attracted well-heeled patrons and provided rewarding gigs for up-and-coming musicians like Waller. But the clubs were run by whites, and much of the entertainment was framed to appeal to white audiences. Some of Waller’s compositions, like “Two Sleepy People” or “I Can’t Give You Anything But Love,” entered the pop repertory and mass consciousness shorn of their black roots. Harris and Ma’atunde have restored Waller’s unalloyed idiom, syncopation and diction to dozens of songs while keeping them immediately accessible.

Ain’t Misbehavin’ also wants us to recognize and embrace the elusive style known as “stride,” wherein the heavier bass notes of the left hand run against the lighter, more lyrical right hand. Broad-backed conductor and pianist Phillip Hall, leading the musicians, is always seen on stage without ever showing his face. He’s a constant reminder of Waller himself, whom jazzman Oscar Levant called the “black Horowitz.” Maybe Vladimir Horowitz was the Russian Waller.

Three women and two men, never before part of an ensemble or team, project characterizations based on their own personae. They are sometimes referred to by their offstage names, as if their interpretations were created just for this production. In the 1978 Broadway staging, short, corpulent Nell Carter ran away with the show, garnering awards and achieving a brief stardom. Songs assigned to Carter, such as the plaintive “Mean to Me,” are here taken by Jennifer Fouché, who does not look like Carter or make any attempt to mimic her. Like all members of the cast she has some comic numbers, like the speeded-up “Cash for Your Trash,” but she knows romance as well, notably “I’ve Got a Feeling I’m Falling.”

All five players are distinctive physical types so that we’d never confuse them, even when they perform numbers on parallel themes. Short, sassy Lexi Rhoades is the first to appear in a solo, the unabashedly sexy “Squeeze Me.” Director Harris frequently has her do a high-stepping strut, like a funky majorette. Her bounciness adds zest to many numbers, especially her lead in the duet, “That Ain’t Right.”

Tall Danielle Herbert, a familiar face as Babs in Orange is the New Black, is a high-spirited bombshell in “Yacht Club Swing.” She switches tone for “Keepin’ Out of Mischief Now,” and later appears in one passage to spoof the phrasing of an operetta, perhaps by Sigmund Romberg.

We can never take our eyes off massive Anthony Boggess-Glover, the largest member of the cast, who is also one of the two dance captains. Not that he upstages his fellow performers, but it’s easy to see why the program often cites him first in shared credits, such as the duet with Jennifer Fouché, “Honeysuckle Rose,” or “Lounging at the Waldorf.” Boggess-Glover hits the perfect deadpan tone for two novelty numbers, “Your Feet’s Too Big” and “Fat and Greasy.”

Thin, angular and rubber-joined, Stephen Scott Wormley could hardly make a greater physical contrast with Boggess-Glover. We notice him early on when he demonstrates the breathing capacity to hold a note longer than thought humanly possible. But his big moment comes with the edge-pushing reefer-madness song “The Viper’s Drag,” drawing even more on his ability to mime than to sing.

Over the 30 or so numbers, it’s striking how fresh the music sounds, even when it’s 90 years old. Many songs, like so much of American popular music, are about the discovery of love or the celebration of good times, such as “The Joint is Jumpin’,” which ends the first act with the wail of a police siren. That makes all the more effective the highlight of the second act, “Black and Blue.” A Waller collaboration with Harry Brooks, plus lyrics by longtime pal Andy Razaf, the arrangement here is by Chika Kaba Ma’atunde. It would make a companion piece to Billie Holiday’s signature song, “Strange Fruit.” The final verse reads, “How will it end/ Ain’t got a friend/ My only sin/ Is in my skin/ What did I do to be so black and blue?”

James V. Thomas’ set, with an art deco-stylized keyboard across the proscenium, lighted by Jennifer Setlow, is more gorgeous than anything Waller saw in his lifetime. Additional visual flourishes are provided by Greg Horton’s swanky costumes, which make this production of Ain’t Misbehavin’ feel like it could have easily added a number from Waller’s contemporary, Irving Berlin’s “Puttin’ on the Ritz.”