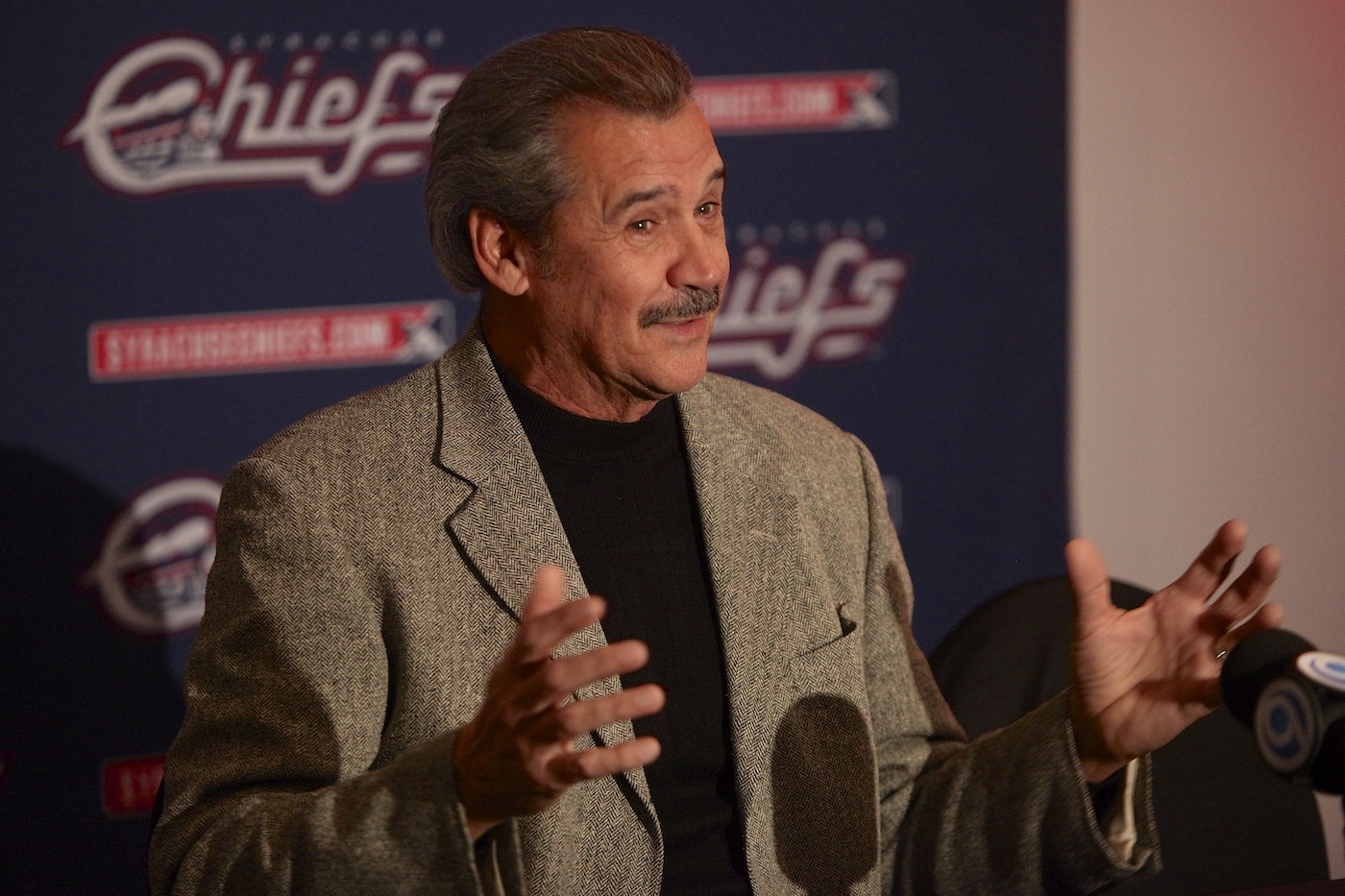 As general manager of the Syracuse Chiefs, it’s Jason Smorol’s job to know this market. And while the Chiefs are the Triple-A affiliate of the Washington Nationals, Smorol recognizes that this town is filled with New York Yankees, New York Mets and Boston Red Sox fans — mostly Yankees.

So Smorol says, “We listen to our fans,” whether he’s bringing a former major-league player to NBT Bank Stadium for an autograph session or finding a keynote speaker for the team’s annual Hot Stove dinner.

“Someday, it’s going to be a Nationals town,” Smorol said, smiling. “For now, it’s a Yankees’ town and we’ll keep bringing guys in that the people want. We recognize that we get a lot of good feedback from the fans when we bring in a guy like Ron Guidry.”

Guidry, one of the most popular Yankees from the World Series championship teams of the late 1970s, visited the Pirro Convention Center Jan. 20 as the keynote speaker for the Hot Stove dinner. More than 650 people attended the dinner and about 150 people paid an extra $125 to attend a private meet-and-greet with Guidry. The dinner is organized by the Chiefs’ Charitable Foundation and proceeds benefit the Syracuse Challenger Baseball League, the RBI Baseball League for inner-city children, and District 8 Little League. Guidry, who turned 66 in August but looks 20 years younger, pitched for the Chiefs in 1975 and 1976 before making it big with the Yankees. Last summer he returned to Syracuse for the first time since 1995 as a special guest for the Chiefs’ Wall of Fame induction ceremony and to sign autographs at NBT Bank Stadium. (Guidry was inducted into the Chiefs’ Wall of Fame in 2007 but did not attend that ceremony.)

Smorol said Guidry’s summer appearance went so well that the board of directors decided to invite him back for the Hot Stove, where fans could listen to his stories about the “Bronx Zoo” Yankees of the late 1970s. Guidry said he and his wife, Bonnie, had more free time on this visit to travel around the city and they stopped by the original Twin Trees on Avery Avenue — a favorite of the players when Guidry was in Syracuse.

Before the dinner, Guidry met with the media and discussed a variety of topics, from George Steinbrenner’s Hall of Fame chances. to Reggie and Thurman, to the Yankees’ current youth movement. Here’s what Guidry had to say.

On being a closer in Syracuse and then becoming an emergency starter for the Yankees in 1977 because of injuries in New York:

“For me as a young rookie, look, I don’t care how I pitch up there, I just want to pitch. Every minor leaguer, if he comes (to Syracuse) and he’s a third baseman, if they call him and ask him, ‘Would you rather play third base in the minor leagues or would you rather catch in the big leagues,’ they’ll go get a catcher’s mitt, because everybody dreams of playing in the major leagues.

“Now, I’ve always said, once I learned what I was supposed to have as a pitcher to pitch there (in the majors), I wish I would have been able to do it as a closer because I think I would have been a much better closer than I was a starter. Because if you can pitch nine innings and do the job I did, you could pitch one inning and do a good job.”

“It’s not so much that he changed the game, he changed the Yankees and that team made a lot of teams change what they set out to do and how they went about doing it. Because he was the first one to get into the free agency stuff, everybody else said, ‘OK, this could be lucrative, this could be beneficial to the organization.’ Now, it plays a huge role in a lot of teams’ success.”

On why he would vote for Barry Bonds and Roger Clemens for the Hall of Fame even though both former stars have been linked to heavy steroid use (both have fallen short of election but are gaining votes each year):

“If you’re talking about Bonds and Clemens, look, those guys were so good they could have just walked out there and not done anything and they would have still made it. That was their ability. I don’t know if they’ll ever get in; I don’t vote. It’s just a shame that stuff is out there.

“I would vote for them, yeah, because I’m looking at what they accomplished before (the alleged steroid use). Because before all of that came out, those guys had already amassed things that most guys don’t amass.”

On playing with Reggie Jackson and Thurman Munson, the two superstars at the center of the “Bronx Zoo”:

Reggie: “Reggie’s Reggie. He’s not like you or I. He’s flamboyant. He just liked the big stage, and I always felt like he had to have that. There’s a lot of us, we don’t need it. We can perform on the big stage, but we don’t have to have it. I would rather you not know who I am when I go out. Reggie wants everybody to know who he is, and he liked that.”

Thurman: “I had Munson at the beginning, so I got spoiled right away pitching to Munson. I shook him off one time on my own and I got my butt chewed out. He called timeout: ‘What are you doing? Don’t think, let me do that.’ I said, ‘OK, dude.’”

On the current Yankees, who this past summer went in the very un-Steinbrenner-like direction of trading veterans and building their farm system:

“Where New York is now, I’m not going to be wrong when I say, a year, two years ago they had a very old team. They didn’t perform like they used to perform. So now they’re looking at bringing up some younger kids, they made a couple of trades and they got some young prospects, and some very good prospects, so you’re hoping that in the next couple of years a couple of those young prospects produce for you.”

Hot Stove leftovers: As a result of a broadcast partnership with the Cumulus Radio Group, all Chiefs games through 2019 will be carried on the Score 1260 AM. Kevin Brown, who is working for ESPN and Time Warner Cable Sports in the offseason, will return for his third year as the team’s main radio voice.

The Chiefs will open the 2017 season April 6 at 2:05 p.m. against the Rochester Red Wings at NBT Bank Stadium. For ticket information, visit syracusechiefs.com or call the Chiefs’ box office at 474-7833 during regular business hours.

Accomplishments: Guidry had a career record of 170-91 in 14 years with the Yankees and was a five-time Gold Glove Award winner, four-time All Star and two-time World Series champion. In 1978, he won the American League Cy Young Award with a 25-3 record and 1.74 ERA that included a win over the Boston Red Sox in a one-game playoff for the A.L. East Division title.

Did you know? The tradition of fans standing and clapping when their pitcher has two strikes on the batter started at Yankee Stadium on June 17, 1978, when Guidry struck out 18 California Angels to set a Yankees’ record. That was also the night Yankees broadcaster Phil Rizzuto dubbed Guidry “Louisiana Lightning.”