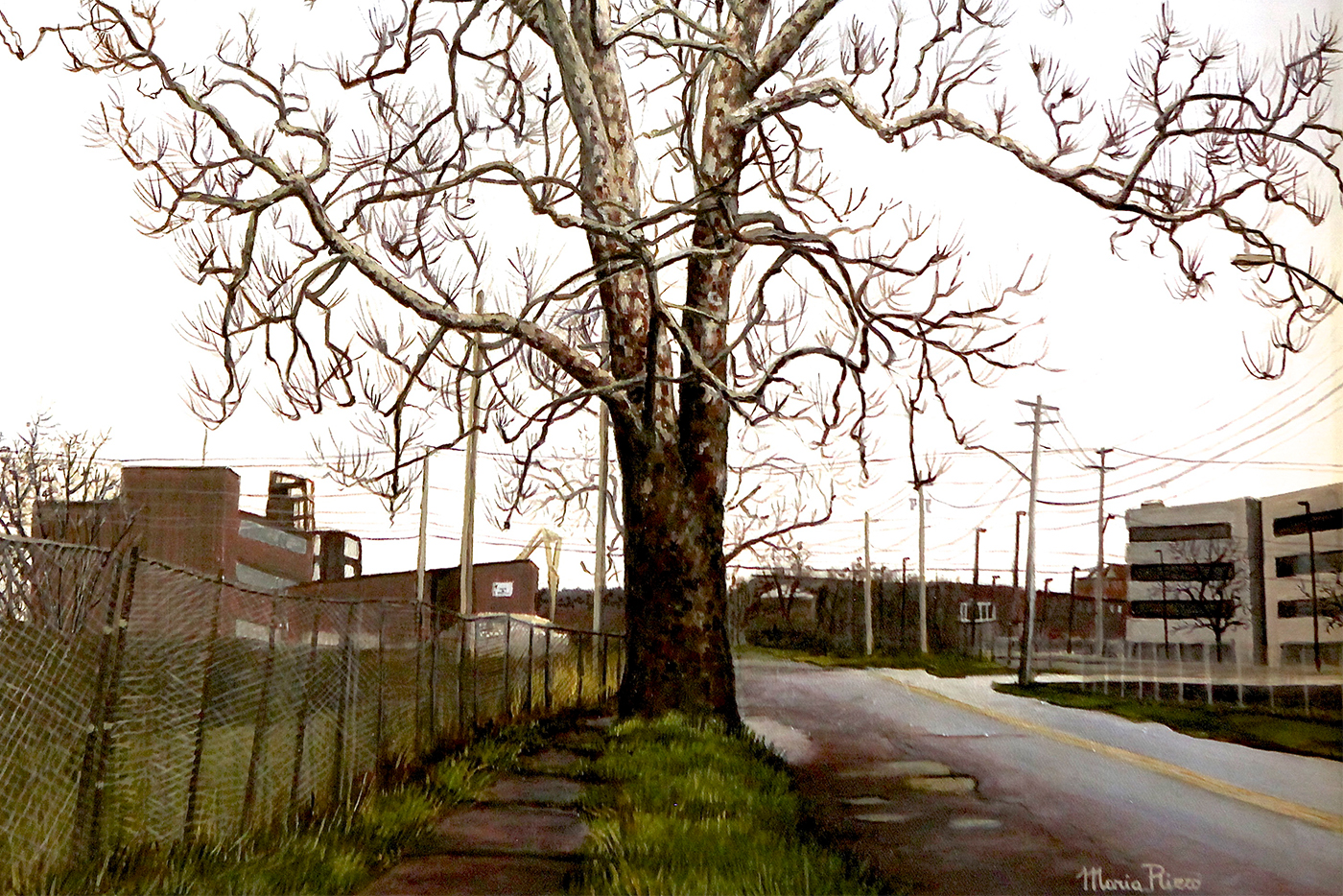 Maria Janina Rizzo’s acrylics portray trees, such as “Along the Canal,” with its rich mix of orange and green colors. “Urban Trees” both emphasizes a single tree in the foreground yet presents supporting visual details: a fence to the left, a barely visible fence to the right, a construction crane, a window in a nearby building. Rizzo nicely communicates the interplay between the tree and its urban setting.

Eva M. Hunter has drastically different pieces on display. On one hand, she creates works like “Badlands,” “Adirondack Reflections” and “Fat Bottom Pond,” all of which depict landscapes or outdoor scenes. On the other, she moves into the horror genre with “Spider Tea,” in which large spiders sit around a table that holds a human head. 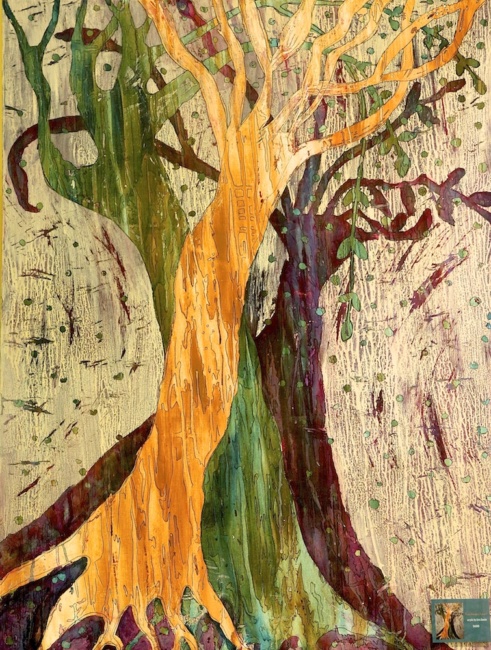 One of the works on display at the Wonder Woman show at the Tech Garden. Michael Davis photo

Several works document artists delving into themes in a non-linear way. Erin Davies’ “Past, Present, Future” doesn’t deal with time or life in traditional stages. Instead, her acrylic depicts three branches coming together and overlapping.

The exhibition also presents abstract works by Constance Avery, including “Interrupted,” with its blend of blue, gold and purple colors. In “The Matador’s Picador,” red and green colors clash with each other, generating a sense of conflict.

Arianna Coursen has several small paintings such as “Peaceful Glow,” “Morning Glow,” and “Still Waters,” which suggests a meeting between sky and sea. “Black Night,” a strong work, details a dark sky and conveys a sense of moodiness.

A series of archival digital prints by Alexandra Mailtais encompasses “Number Six,” which assembles the scales of justice and other objects, and otherworldly pieces like “Number Tree,” which portrays a woman within a circle amid various planets.

In addition, Caroline A. Locatelli has created diverse illustrations: “Grandpa Moon,” “Reaching for Space Fruit,” which portrays a female figure, and “Embezzlement,” a piece without any depiction of fraud. Instead, the word flows from a balloon.

Other works further document the exhibit’s selection of diverse works. It has room for Diana Bukowski’s “The Missing Rainbow,” which portrays a rabbit holding an umbrella and standing under a rainbow. It also samples the “Yell” series created by Karmin Schafer Hansen. In these abstract works, yell appears again and again, each time in a different format and accompanied by blue and white colors. The artist is revising and recasting, reinterpreting an idea.

They are part of an exhibition displaying a large number of artworks and easily integrating various styles. Wonder Woman blends abstract and non-abstract pieces, and generally presents enough pieces for viewers to get a sense of each artist’s work. Thus, it’s a successful show.