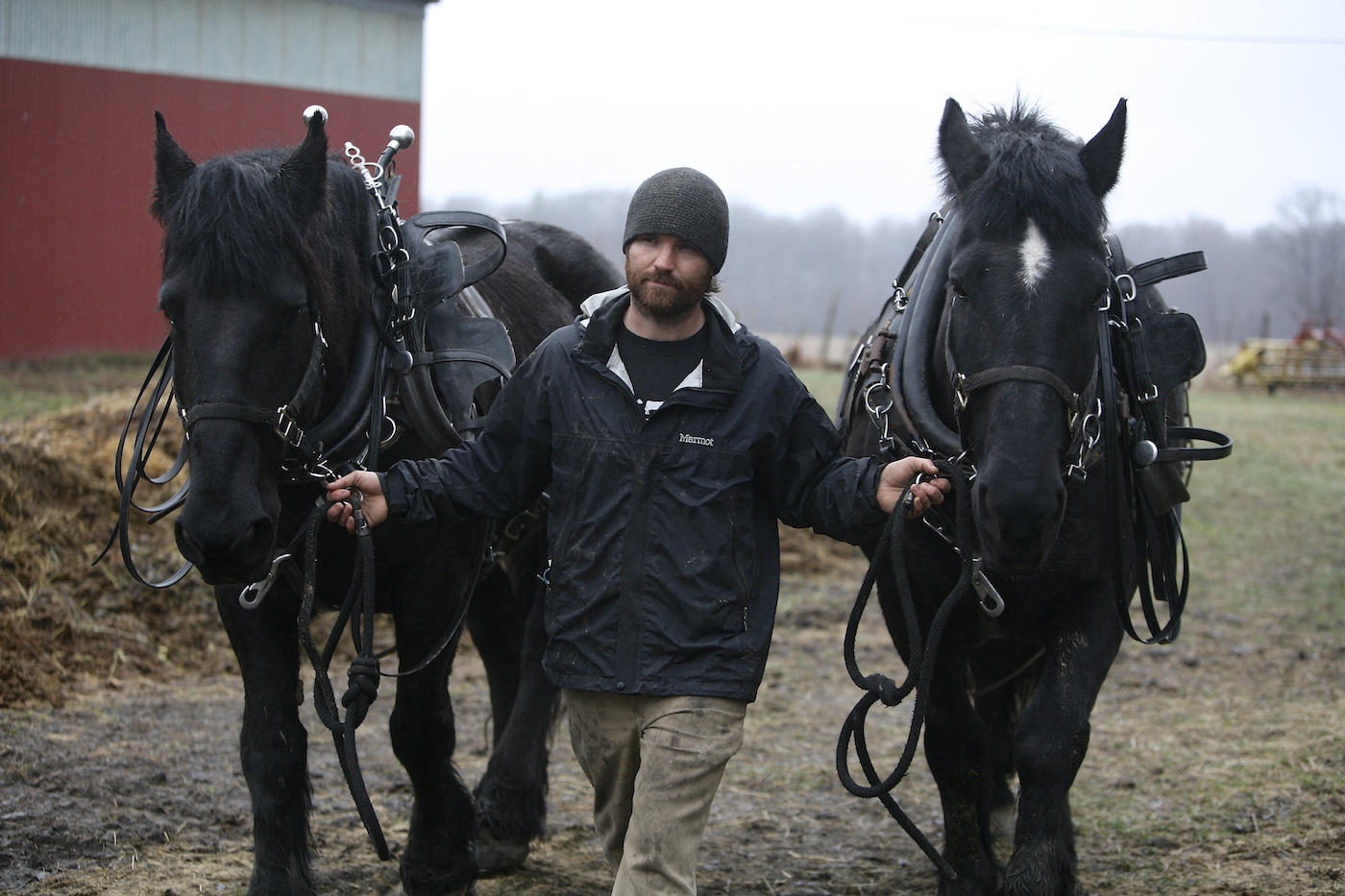 Greyrock Farms to grow new crops for partnership with The Tailor and the Cook.

The start of the growing season is a couple months away, but Matt Volz, manager of Greyrock Farm, 6100 E. Lake Road, Cazenovia, and Tim Hardiman, owner and executive chef at The Tailor and the Cook, 94 Genesee St., Utica, already have visions of asparagus, tomatoes, greens, peppers, potatoes and more.

Greyrock is a 300-acre farm that offers a CSA (community-supported agriculture) subscription year-round. The Tailor and the Cook is a 48-seat farm-to-table restaurant with an emphasis on local. The restaurant, named one of the top 100 restaurants in the country by online reservations provider OpenTable, rolls out a fresh menu each week. In season, 85 percent of the perishable ingredients Hardiman uses at the restaurant are sourced locally: produce, meats, cheeses, eggs, dairy and other ingredients.

The farmer and the restaurant owner have done business together for five years. Volz travels to Utica once or twice a week to deliver meat and vegetables to the restaurant and pick up breads from Utica Bread (also owned by Hardiman) to sell at the Greyrock farmstore. This winter, Greyrock and The Tailor and the Cook have taken their relationship to another level by embarking on an RSA (restaurant-supported agriculture) partnership.

RSA is a larger-scale version of the traditional CSA model, which helps farmers better plan their growing seasons and gives them an infusion of cash because members pay upfront for the food they will receive. The RSA partnership means that The Tailor and the Cook has paid in advance for some of the produce it will use this season instead of shopping around for it.

“This is a huge benefit to us and we’re thrilled to have this partnership,” Volz says. “They’re giving us a list of things they really want us to grow, including some things we haven’t grown before, and we’re really excited about it.”

Meat and fresh produce from Greyrock is on the menu at several local restaurants, including the Empire Farmstead Brewery and Empire Brewing Company. But this is the farm’s first RSA collaboration. Volz has been studying seed catalogs and getting ready to place orders. He estimates he will dedicate two to three acres at Greyrock for The Tailor and the Cook. “They’re a relatively small restaurant, so it’s not a huge volume of stuff,” Volz says.

Usually farmers take the gamble of growing a wide variety of produce, then “put on the sales hat” and attempt to sell it to restaurants as it becomes available. The growing season is unpredictable and so are sales. It’s common, Volz says, to be paid weeks after produce is picked up or delivered.

For The Tailor and the Cook, Volz and his crew will grow everything from asparagus to zucchini and some things they don’t normally grow, including broccoli rabe, purple-skinned Peter Wilcox potatoes, Stortino de Trento (a variety of heirloom beans from Italy), funky radishes and squashes and as many storage crops as possible.

On a bleak winter day when snow was piling up outside, Hardiman said he looks forward to the super-sweet spring parsnips, planted at Greyrock last season and “wintering over” at the frostline, that Volz will harvest and deliver to The Tailor and the Cook in early spring.

For Hardiman, partnering with Greyrock on RSA makes sense on multiple levels. The restaurant works with about 50 local producers and several local suppliers, which adds up to a lot of emails, phone calls and texts, as well as checks to mail. The logistics are challenging. His goal is to streamline a part of his procurement and purchases to make running the restaurant a little easier. The restaurant is now open for dinner six nights a week, offering a new menu each week and a nightly chef’s tasting menu.

“I want to talk to the farmer,” Hardiman says. “I want to visit the farm. I still feel like I’m one step away. To me, as a farm-to-table restaurant, it makes sense to put my money where my mouth is, to walk the walk and not just talk the talk.”

If you have ever considered joining a local CSA, now is the time to take action. National CSA Day is Friday, Feb. 24.

CSA details, offerings, share sizes and payment options vary from farm to farm. Some, like Early Morning Farm in Cayuga County; Main Street Farms, Cortland; Grindstone Farm, Pulaski; and Common Thread Farm and Hartwood Farm, Madison County, have CSA drop-off points all over Central New York. Others involve a visit to the farm for pickup, which has its benefits, too. Some farms welcome volunteer assistance and you might get to visit a cow or horse barn.

Boxed shares used to be the norm, but farms are offering more flexible options these days. Greyrock Farm shifted to a market-style CSA several years ago. Members put down a deposit, establish an account ($500 minimum) and shop at the market-style farmstore when it is convenient for them. Members at the $500 level receive a 5 percent discount on Greyrock’s produce and grass-fed meats.

The Greyrock Farm store, which is open to the public, operates year-round: Mondays, Tuesdays, Thursdays and Fridays, 2 to 6 p.m., and Saturdays, 10 a.m. to 2 p.m.

Some farmers offer incentives for early CSA registration. Main Street Farms, in Cortland, is offering 5 percent off the share price for customers who sign up for the CSA by Wednesday, March 1. Hartwood Farm, Chittenango, has a $10 early bird discount for shares purchased and paid for in full before March 15.

“We take CSA sign-ups early in the season so it helps us plan for what and how much to grow,” says Main Street Farms co-owner Allan Gandelman. “Right now we are putting in our seed order and getting ready to start plants in the greenhouses.”

For more information on some of the CSAs in Central New York, visit localharvest.org/syracuse-ny/csa.

Margaret McCormick is a freelance writer and editor in Syracuse. She blogs about food at eatfirst.typepad.com. Follow her on Twitter, connect on Facebook or email to [email protected].

Free Will Astrology
Syracuse Winterfest Continues and Other Activities
To Top