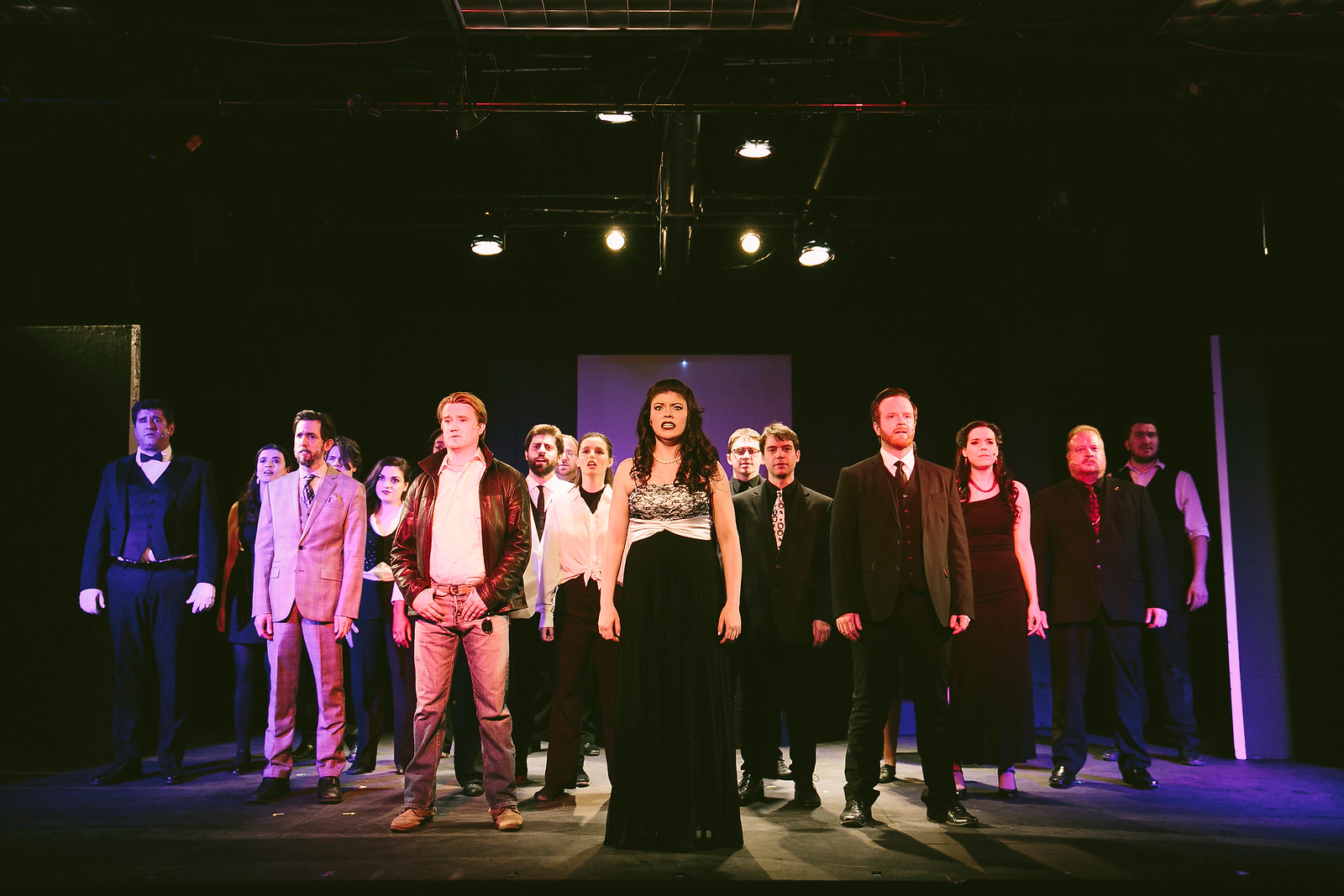 We approach a cult musical differently from your garden-variety hit. With a hit like Guys and Dolls or South Pacific, we don’t expect surprises and are comforted by familiarity. A show cannot become a cult favorite unless it has been wounded, like with a host of savage reviews or disastrous box office, but is championed by an impassioned minority convinced against the odds of the show’s brilliance that wants us to share that vision.

Director Robert G. Searle is a cultist for the Tim Rice-ABBA musical Chess. He makes a compelling case for the show, which runs through April 28 at Shoppingtown’s Central New York Playhouse.

Part of being in the cult is remembering the show’s anfractuous history, which is more demanding than knowing all the characters in the Star Wars franchise. The key moment is the 1988 failure of the Broadway production, based on a different book (by Richard Nelson) and a hamhanded vandalizing of the score. Previous to that Chess had run for three years in London. And ultimately, history is favoring the cultists. This Syracuse production runs concurrently with revivals of the Rice version on both Broadway and London’s West End.

In a 2016 interview with the Syracuse New Times, Tim Rice described Chess as his proudest achievement. A political allegory for the Cold War during the Reagan administration, Chess is a rock opera that first appeared in a 1984 two-disc concept album, much like its Rice siblings Jesus Christ Superstar and Evita.

The score by Benny Andersson and Björn Ulvaeus of ABBA sounds nothing like the bubble gum of their Mamma Mia. They might have been aiming toward Andrew Lloyd Webber, but one also hears disparate echoes from Gilbert & Sullivan and Richard Rodgers. Serious cultists hear remote allusions in the top solo “Anthem” to the ABBA song “Our Last Summer.”

In a candid program note, director Searle acknowledges that his motivation to revive Chess has long been in gestation, and it shows. He has superior voices in all the key roles, such as Paul Thompson as the loutish American Freddie Trumper, Benjamin J. Sills as layered and sympathetic Soviet Anatoly Sergievsky, and Ceara Windhausen (nearly unrecognizable in a black wig) as Florence Vassy, the woman who comes between them. Frequently dominating the scene is Steve Gamba as the whitegloved Arbiter of the matches.

Searle’s commitment to quality extends through the supporting players, including an excellent Kate Crawford as Anatoly’s wronged wife Svetlana, new face Garrett Robinson as the enigmatic Soviet coach Molokov, and Christopher James as de Courcey, his American counterpart. Confidence in Searle’s commitment is so high that five of the singers-dancers in the 14-person ensemble have been leads in recent productions here and elsewhere.

Chess was partially inspired by the highly publicized matches in the 1970s between grandmaster Bobby Fischer, one of the most toxic figures ever to appear in American public life, and the press-friendly Soviet masters, Viktor Korchnoi and Anatoly Karpov. Yet Rice has made clear that the emergence of the concept album in 1984 was intended to comment on Ronald Reagan’s last eruption of Cold War rhetoric, incidentally linked to a fictionalized account of U.S.-Soviet chess matches.

Changes in the political climate led to rewrites of the show just as drastic as the unfortunate New York City opening. Freddie Trumper, despite his prominent personal failings, is far less a miscreant than Fischer was. None of the original matches were in Thailand as they are here, prompting one of the show’s best numbers, “One Night in Bangkok,” also a Top 40 smash in 1984. And Fischer did not arrive with a girlfriend.

The basis of the Chess cult is not its politics or even its piquant plot. That relies on the music, of course, and its plangent expression. Music director Abel Searor has assembled an eight-piece orchestra, including two brass players, and his keyboard can deliver both a harp and a harpsichord. From the overture and onward, the ABBA score can be gripping. Splendid as Freddie’s numbers like “Commie Newspapers” are, we see in the first act that Rice’s book has favored Florence, such as the affecting solo “Nobody’s Side,” and Anatoly’s powerhouse first-act finale, “Anthem.”

More musical riches are found in the second act, including a big solo for Freddie, “Pity the Child,” and adulterous love-making by Anatoly and Florence in “You and I.” Anatoly’s betrayed wife Svetlana, an aspect of the plot audiences may be slow to embrace, has her plaintive moment in “Someone Else’s Story.” Another winning solo is Molokov’s ironic “Soviet Machine.”

Press comments on the original London version praised its elaborate production values, impossible to reproduce in Shoppingtown. The task of evoking them falls to choreographer Shannon Tompkins. With what space she has been given, Tompkins has the ensemble, dressed in either black or white, depict the conflict on the chessboard, with arrogant rooks and bishops knocking down hapless pawns. It’s one of the cleverest things she has ever done.

Thirty years after bombing on Broadway, Chess is having its day, simultaneously in London, New York City and Syracuse.