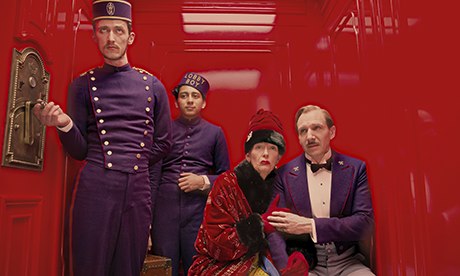 “The Grand Budapest Hotel” starts out with a monument to the writer of this tale. She hangs her trinket on a statue along with many others, signify her affection. Then she opens his book. And off the packed Saturday night theater at Destiny USA took off into the fanciful world of Gustave H, concierge supreme, and Zero Moustafa, Lobby Boy loyal to the core.

Directed by Wes Anderson and written by Anderson and inspired by the words of Stephan Zweig, this rambling comedy surfs centuries, ages and de-ages characters, and presents enough twists and turns to make the winding downhill skiing and luge escape scene seem tame.

And Ralph Fiennes as Gustave and newcomer Tony Revolori as Zero are perfect as odd fellows stuck together by work and kept together by an escapade so large it took 30 famous Hollywood cameos to finish the job.

Fiennes is gumby-faced as the wrongly accused concierge dealing with prison, escape, and absolute antics to prove he did not murder the old woman who’d left him a priceless painting. Of course, that, he did steal. Fiennes proves to be a perfect leader and foil all in one, as Anderson has drawn this man in the midst of an outbreak of a World War that will change this European paradise forever.

Revolori, meanwhile, is a master of deadpan, big eyes alight in an inner knowledge that his love for birthmarked baker Agatha (played by Saoirse Ronan, brightly) is good, right, and will prevail over anything Gustave can throw in their path. “Don’t flirt with her,” the Lobby Boy warns with a wagged finger at the notorious lover of many people and things.

The plot is funny and the actors are humorous, a mix of slapstick and serious wordplay.

Among the side players, Willem Dafoe stands out as a bad guy and Ed Norton as a good cop.

Bill Murray’s on-screen turn as a member of the Crossed Keys is rather irascible, another in a long line of good and eccentric choices by the wily Anderson.

The capacity crowd cheered at the end. They had gotten the sly and silly that had lured them there.