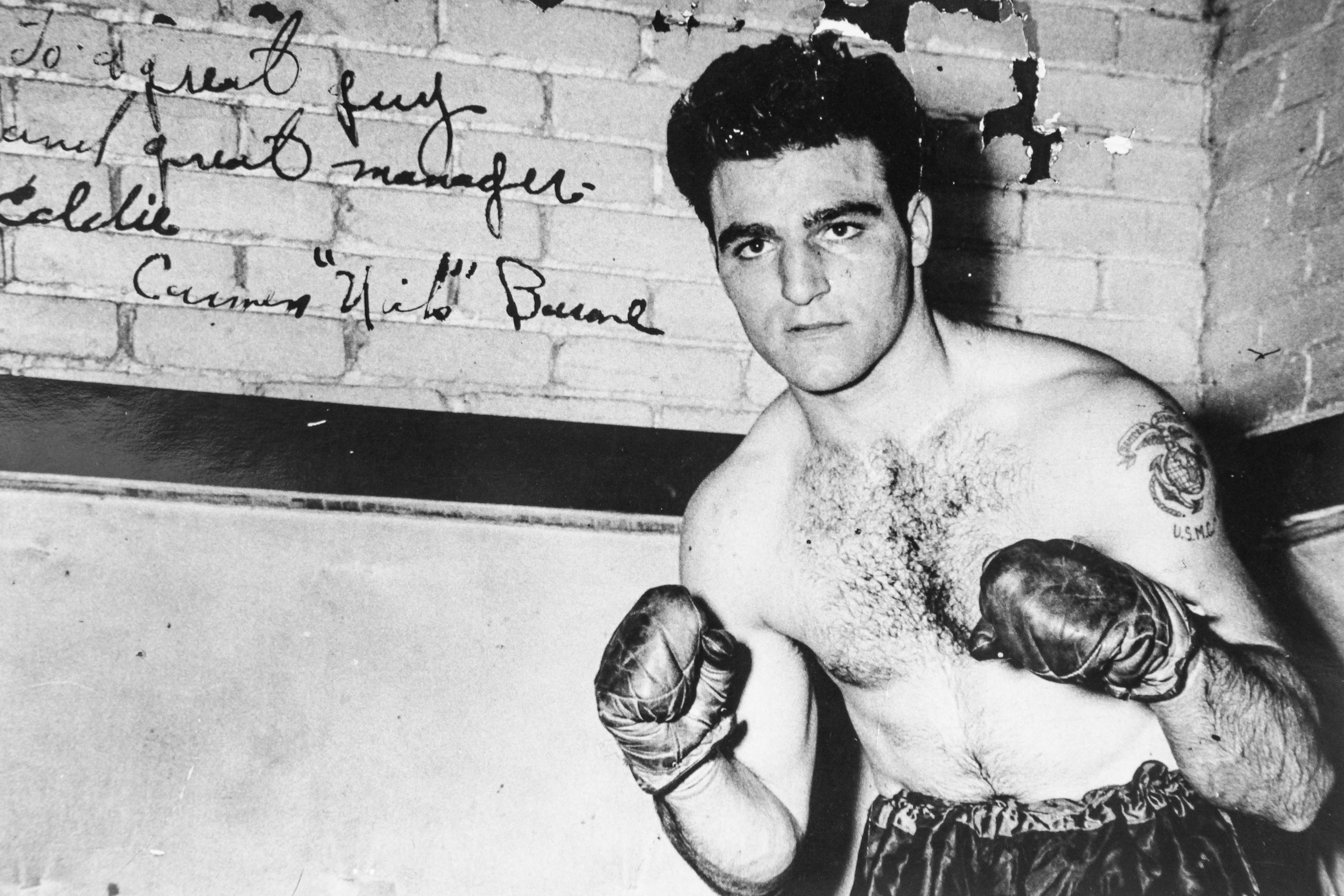 It was a boxing match that Syracuse native Nick Barone could not turn down.

In 1950, Ezz Charles had only a few months earlier won the belt of the heavyweight champion of the world. It was time for Charles to defend that title, and Barone was picked as a likely opponent who might give him a good run in the ring, although not enough of a challenge to dethrone him.

Barone, who had fought as a light heavyweight before that, knew he wasn’t expected to win. But he couldn’t say no: It was the heavyweight championship at stake, and there was always the chance that he could best Charles. A 1950 promotional poster for the heavyweight matchup of defending champion Ezz Charles and challenger Nick “Bull” Barone of Syracuse. The day of the fight was later moved to Dec. 5 because of the weather. (Provided photo)

He agreed to battle the champ in the Cincinnati Garden — before 10,000-plus spectators in Charles’ hometown. The Dec. 5, 1950, bout lasted into the 11th round before Barone was knocked to the canvas — for the first time in a career that boasted no amateur fights ever, said son Raymond Barone of Las Vegas — to stand back up and try to take on Charles some more.

The referee, however, saw Barone was definitely getting the worst of that fight, and ended it. Barone later admitted to family friend and neighbor Sterling Oddo that he was relieved to be done with that fight.

But he was far from a loser in that match. Barone had bet on himself — at some long odds — to last 10 rounds against the champ, and ended up pocketing $3,000. That money was used to buy a home in Eastwood, where he and his wife Marge raised their family near Oddo.

Today, Oddo looks back on that lifelong friendship as his inspiration in his campaign to earn Barone the recognition Oddo feels the boxer is lacking in today’s sports world, including induction into the Greater Syracuse Area Sports Hall of Fame. Oddo has set up a Facebook page to promote Barone, where there is a petition to get the attention of the powers-that-be at the Hall of Fame.

“He was the first and only heavyweight boxer from Syracuse ever to fight for the title,” Oddo said. “He belongs in the Hall of Fame.”

To make the odds against him even greater, throughout that fight Barone was concealing an eye injury sustained in another recent match, Oddo said. He couldn’t see many of those punches coming at him but kept at the champ anyway.

Oddly enough, that wasn’t all the contender was hiding. “Nick Barone” was in reality his older brother: The boxer, who was named Carmen Barone at birth, had taken his identity to join the Marine Corps when he was only 16. The real Nick Barone died at a young age, Raymond Barone said.

Fresh from the Marine Corps serving in the Pacific Theater of World War II, where he saw action in Iwo Jima, Barone became a pro boxer at age 19. He was known as “The Fighting Marine,” or simply “The Bull.”

“The way he fought was to come out fighting when the bell rang,” Raymond Barone said, “and keep fighting until the bell rang again.”

Shorter than many of the other boxers, he had to fight inside to make any headway, and was famed for not moving backward during a match, added Raymond’s brother John Barone of Minoa.

Six months after the fight for the title, Barone retired at age 25 with a 47-11-1 record. It might have happened even sooner: Barone had said if he won the heavyweight championship, he would have retired then and there, announcing it in the ring after the fight.

Many lives would likely have changed if he had won. Both of his sons look back and wonder if they would have ever been born if Dad had won the title.

Oddo once told Barone he was glad Barone never won that title, because if he had the two men might never have met. Maybe it was all meant to happen the way it did, the men agreed.

A modest man who was well known as a gentleman, Barone never sought attention for his boxing in later years.

“He would say, ‘They put on a fight, and I showed up,’” John Barone said about hearing his dad talk about that heavyweight championship match.

Barone died March 12, 2006, at age 79, seven years after losing Marge. John Barone said she was always a big part of his boxing career, but at the same time she didn’t like watching him fight because she was afraid to see him get hurt. Raymond said their household growing up was “run by Mom with Dad’s rules.“ It wasn’t overly strict, although he knew not to be too lippy with his father.

Raymond Barone said it took until he was in his 30s before his dad started to really open up about his boxing career, especially that big fight. Maybe it was that modesty, maybe it was his un-boxer-like gentle demeanor, or maybe it’s because neighborhoods like that old place in Eastwood where lifelong friends are made just don’t really exist anymore.

For whatever reason, Barone’s impact on the world of boxing — and Syracuse-area sports — has sadly been overlooked. And that’s something this trio of fans wants changed.

“Why isn’t this man in the Hall of Fame?” John Barone mused.

For more information, and to watch video highlights from Barone’s career, head to the “Nick Barone Boxer” Facebook page.