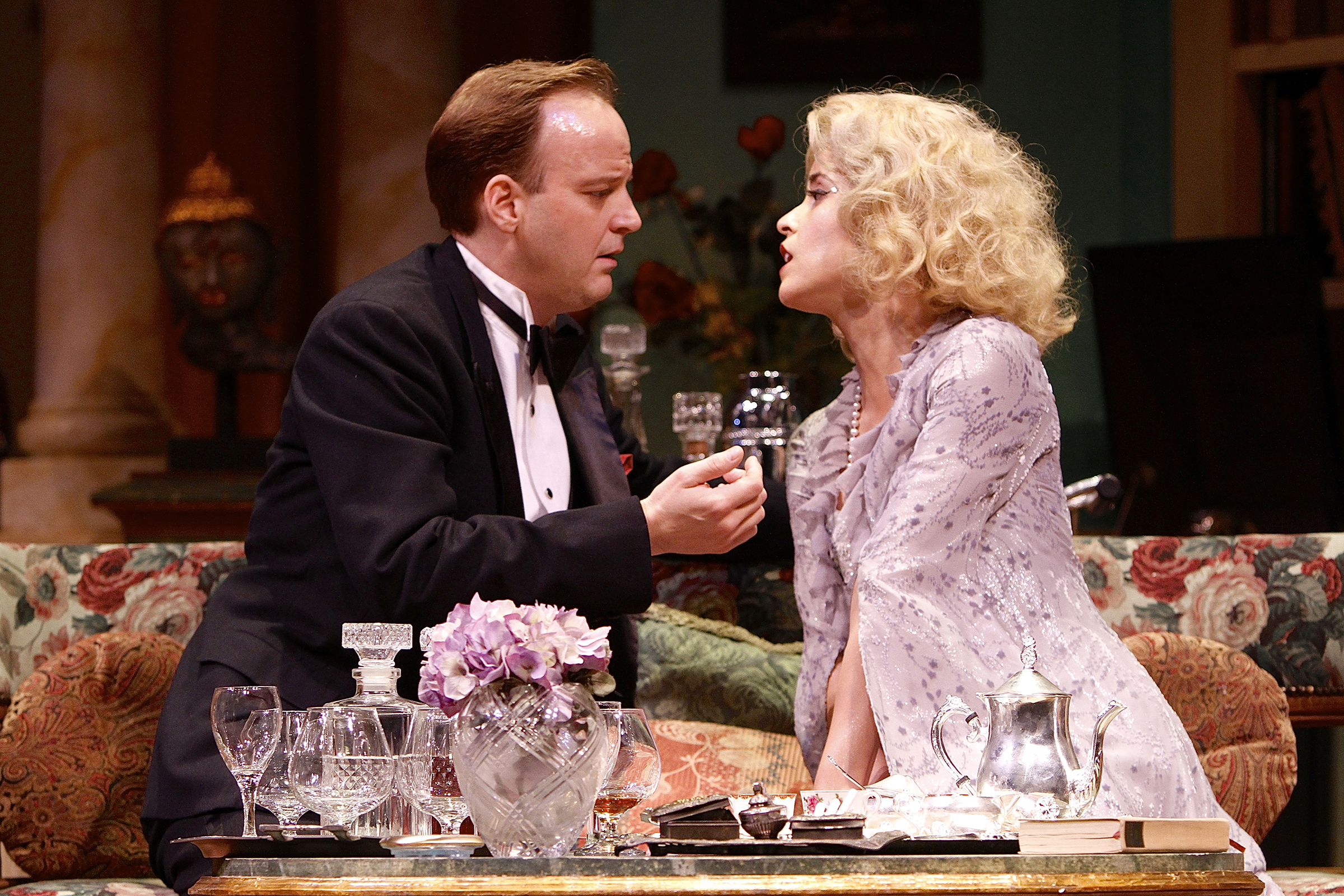 Blithe Spirit, Noel Coward’s breezy comedy classic about a ghostly wife who bewitches, bothers and bewilders her living husband, is part of the season-long celebration of the company’s 40th anniversary. This season is also dedicated to its late founder, Arthur Storch, who moved on to a heavenly balcony last March. Storch, by the way, produced Blithe Spirit during the company’s third season, and chances are he would have heartily approved this fun revival.

Author Charles Condomine (Jeremiah Wiggins) is in research mode for his next project, to be possibly titled The Unseen, and concerning the homicidal tendencies of a murderous medium. So summoning the dotty Madame Arcati (Patricia Hodges), a bicycle-riding psychic, to perform a séance at the Condomine residence seems like a novel way to spend an evening. Also along for the spectral showdown are Charles’ second wife Ruth (Joey Parsons) and their guests, the Bradmans (Curzon Dobell and Elizabeth Ingram).

While the hosts snidely presume Madame Arcati to be a crackpot, she does manage to make contact with the great beyond. Charles’ first wife, Elvira (Gisela Chipe), dead for the last seven years, pops up to disrupt everything— albeit under the caveat that only Charles can see and converse with her very spirited personality.

Charles believes he has gone temporarily bonkers yet quickly embraces the concept that—much to Ruth’s displeasure—he can amiably schmooze once more with Elvira, who died quite young and under mysterious circumstances. After all, Elvira and Charles’ favorite song, Irving Berlin’s “Always,” was playing on the gramophone during the séance. Yet Elvira has ulterior motives for her ghostly reappearance; as Elvira declares at the end of the first act, “To hell with Ruth!”

Ghosts have been an endless source for floorboards fodder since Shakespeare wielded a pen, although the timing of Coward’s 1941 work perhaps played a factor in its early success. Blithe Spirit revels in upper-class gallows humor, which probably gave Britain’s theatergoers an emotional release from the ongoing horrors of a world at war.

Coward’s literary creation of Madame Arcati is also one for the ages, as well as a feast for the lucky actress who snags the coveted role. Patricia Hodges is an endearing Arcati, able to plow through the dialogue devoted to astral planes and ectoplasmic mumbo-jumbo with a plucky charm (before a séance she sings “Heigh ho, to work I go,” a reference to Disney’s Snow White and the Seven Dwarfs) and yet managing to be mock-serious when occultist Arcati notes the timbre of an angry cuckoo in the garden. Director Michael Barakiva also grabs huge laughs with the running sight gags that take place after each séance, with Hodges’ Arcati usually sprawled out on the floor.

Barakiva skillfully guides the performers through their witty banter, such as this early exchange: Ruth: “Was Elvira more physically attractive than me?” Charles: “That is a tiresome question that deserves the wrong answer.” Joey Parsons makes for an imperious Ruth in the first act, although her character undergoes an amusing shift when she gets cuckolded by the deceased Elvira, portrayed with a spritzy guile by Gisela Chipe. As the wacky maid Edith, Antonieta Pereira’s scene-stealing entrances are often the comic equal to Arcati’s trances.

The Charles character is the beneficiary of Coward’s expertly droll dialogue, and actor Jeremiah Wiggins never falters. When informed about the prospect of dealing with two ghosts, Wiggins’ Charles deadpans, “Maybe they can get a cottage somewhere.”

Jonathan R. Herter’s sound design enhances this elegant entertainment, especially the stereo-surround effects during the séance scenes. Yet even the ultra-posh set (from John Iacovelli) is accorded its own curtain call by the cast members; it’s the type of scrumptious scenic design you’d find at Niagara-onthe-Lake’s the floor. Shaw Festival.