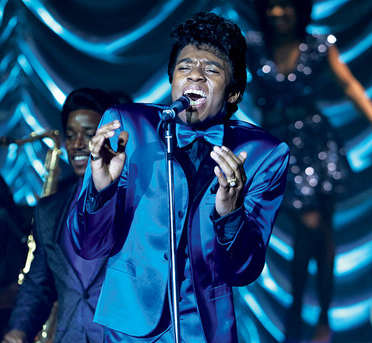 With Chadwick Boseman becoming a big star, it’s a hit

Get on Up starts with James Brown later in life, teaching a lesson, as always, with words and body action.

This time he’s waving a rifle over his head as he lectures a room full of petrified class-takers in a building he happens to own, in which one poor lady happened to have committed the sin of taking a No. 2 in HIS bathroom.

Boom goes the gun by accident, off goes the biopic, written by Jez and John-Henry Butterworth and directed by Tate Taylor, in the many directions needed to explore the complicated life of the man born in the southern backwoods in 1933 who died an American musical legend in 2006.

It’s obvious they’d rather concentrate on the good, the way that Brown’s “hardest working man in show business” genius changed the scope of music forever. And indeed, the movie satisfyingly takes us into the mind of Brown and the way he worked the performance element and changed the business model to benefit himself and musicians smart and talented enough to follow his lead thereafter.

But they also knew they had to touch upon the downside of Brown’s genius, so we also get to witness shorter snippets of his physical violence to his wife, moral unfaithfulness to her, plummet into drug use, and callousness to his band musicians and even his best friend through decades.

Those many sides of Brown had to be explained to complete the picture. And Taylor built the 138-minute movie by jumping around the different eras of Brown’s life to best construct how his personality came to be.

Superb acting made the time-travel work.

Chadwick Boseman should be nominated come awards season for his take on Brown. Boseman makes you understand the pain of the young, conflicted Brown, the middle-aged, confident Brown, and the older, conflicted Brown. He’s now portrayed Jackie Robinson in 42, Floyd Little in “The Express” and running back Vontae Mack in Draft Day. Boseman’s hugely talented, with his words and his physical abilities. In this one, he had to pontificate like Brown and dance and bounce around like Brown. And his chemistry with Nelsan Ellis, as best friend and longtime band mate Bobby Byrd; and Dan Aykroyd, as seasoned music promoter and confidante Ben Bart; lights the screen up.

But the show is Brown’s, and Boseman is up for the spotlight all the way through, from the young years in jail when he meets Boyd on opposite sides of the bars — five to 13 years for stealing a three-piece suit! — and they begin singing gospel, through the journey of forming R&B and soul and funk and double funk and then becoming the Godfather of Soul.

Brown was a complicated man living in complicated times, facing issues of black vs. white and poor vs. rich and having to choose sides where there were no obvious winners or losers.

He always chose himself. He always told everybody else to choose themselves, too.

Of course, those choices make for uneasy bedfellows. And that made for one hell of a ride in his life, sometimes beautiful, sometimes ugly. This movie shows it all, and it is a hit.

No Hate about No. 8 from Tarantino
Movies and Tech
To Top