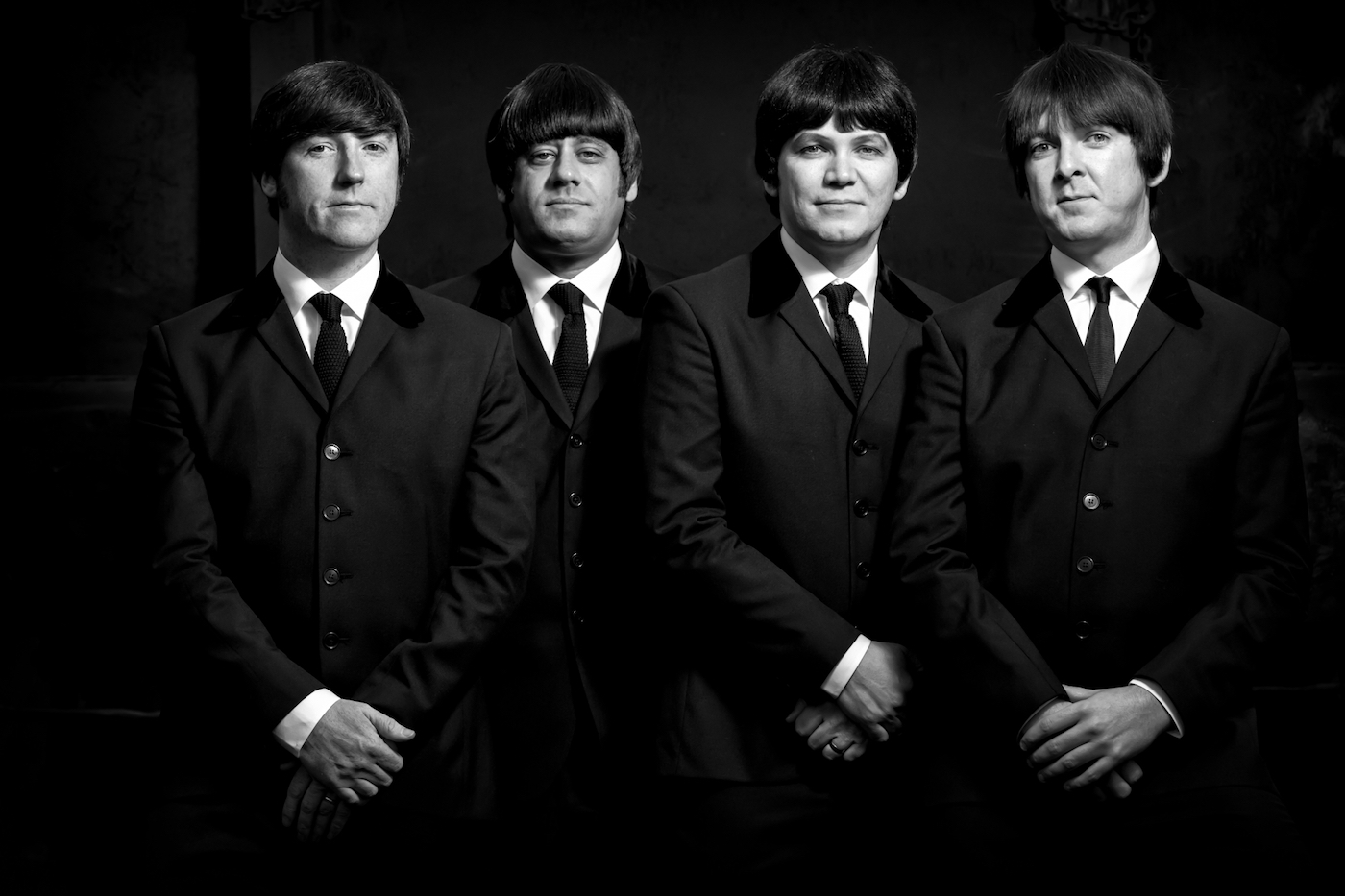 People always want to see their favorite music brought back to life, so tribute acts fill that need. With so many bands now paying homage to The Beatles, however, the Mersey Beatles believe they have some aces up their musical sleeves.

For starters, the Merseys also hail from The Beatles’ home base of Liverpool, England. The group — featuring Steven Howard (as Paul McCartney), Mark Bloor (John Lennon), Davis Howard (George Harrison), Brian Ambrose (Ringo Starr) and Tony Cook — grew up as childhood schoolmates. The Merseys even had a residency at the famed Cavern Club nightclub in Liverpool, where The Beatles also gigged during their salad days. Beyond all this, they’re currently touring with Julia Baird, John Lennon’s sister, who wrote the autobiography Imagine This: Growing Up with My Brother John Lennon (Hodder & Stoughton, 2011). Baird and the Mersey Beatles will visit Eastwood’s Palace Theatre, 2384 James St., on Thursday, May 5.

“We use the word ‘different’ and not ‘better,’” Howard says when talking about the band as a tribute. “We all do it in our own way and we’re all trying to do the same thing: to pay tribute to the greatest band of them all. You can play in your jeans and a T-shirt if this helps you capture the heart and soul of the music.

“There is an attitude in Liverpool, and in the people, which is all about ‘keeping it real.’ We respect the original Beatles in the things we say, and we are ourselves. Julia says we are like them because we’re from the same soil. And that’s good enough for me.”

The group originally started in Liverpool as Tube, a cover band that played Beatles and Doors tracks for about 18 months. Howard eventually left to join Yard Dog while the remaining members formed the vocal band Walkabout. But within a few years, the friends realized playing together was inevitable.

“We knew we couldn’t shake each other off and I put out the idea of just playing Beatles songs because that was my favorite bit of the set every night,” Howard recalls. “I felt playing Dire Straits or even The Clash was just taking up time where a Beatles song could be.”

In 1999 the lineup first rehearsed as the Mersey Beatles with a Fab Four focus. The Cavern Club soon took notice, with the band starting a residency in 2002 that would last for the next 10 years. Meanwhile, the band also met Baird, a director at Cavern City tours, on an Australian tour in 2004, as the shared love of The Beatles sealed the friendship.

“Having become friends with Julia, we got to hear some firsthand accounts of The Beatles and John,” Howard says. “Her memories of the early days are fascinating. However, it’s the relationship, which John and his sisters shared with their mother, which is the real heart of the family story. That relationship gives some insight into the reasons behind John’s drive and attitudes and his struggle to come to terms with losing such an amazing woman.”

It’s also the reason Baird penned Imagine This. “I wrote it really to put the story straight,” Baird says. “One journalist who had just read it, prior to interviewing me, summed it up beautifully: ‘This isn’t about John, this book is a love letter to your mother.’ Perfect. I have written this story in order to confirm or deny the information already available. Most of it is wrong and written by ‘experts.’”

Baird has toured with the group to the United States three times as well as Sweden. She agrees the home connection provides an advantage.

“They are natives of Liverpool,” she says. “They have grown up in our city, which, like all cities, has its very own DNA. They have heard the same conversations, attended the same schools, played in the same streets, worked at the same growing-up jobs, drank in the same pubs. They have been nurtured in the same soil as The Beatles and it shows.”

The group will perform in chronological order from several different Beatles eras in the show, accompanied by frequent costume changes and a slide show. They’re also brimming with excitement to return to their favorite place to tour.

“I love America best of all, and I’m not just saying that,” Howard says. “The people are friendly and the country is vast and beautiful. I also love Malaysia, Norway, Spain and Italy. But my favorite place to play is Liverpool. There’s no place like home.”

The Mersey Beatles perform Thursday, May 5, 8 p.m., at the Palace Theatre, 2384 James St. Admission is $35, with $59 VIP tickets that include a meet-and-greet with the band and Julia Baird. Visit palaceonjames.com and themerseybeatles.com.