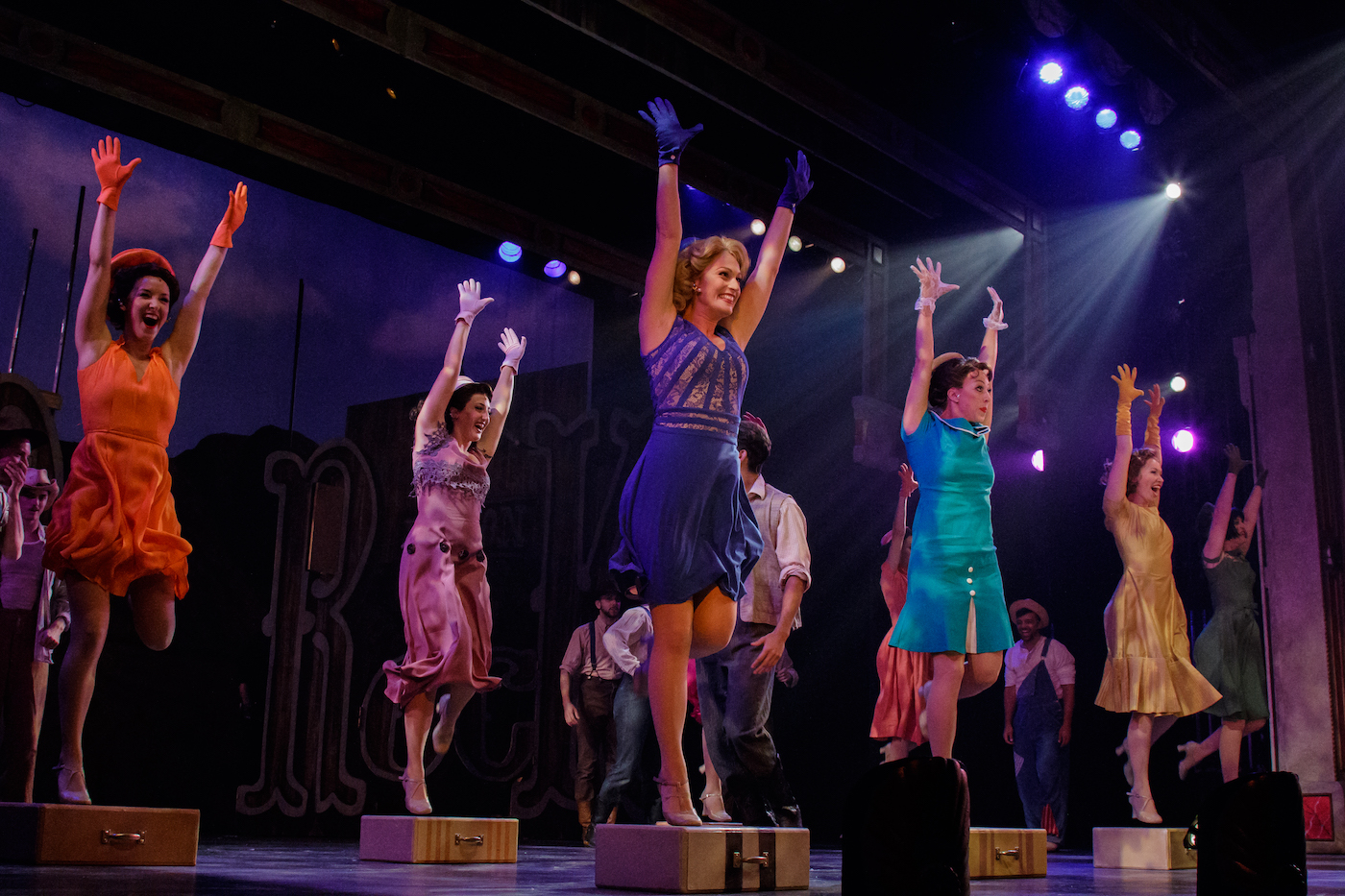 Merry-Go-Round’s boffo production of “Crazy For You” offers gags, gals and Gershwin.

Comedy playwright Ken Ludwig has been well represented this year on local floorboards, with recent productions of Cortland Repertory’s The Fox on the Fairway and Syracuse Stage’s Baskerville. Ludwig’s string of surefire audience-grabbers, which have included frequent local mountings of Moon Over Buffalo and Lend Me a Tenor, explain why area companies keep returning to his well. And that’s why Merry-Go-Round Playhouse’s current version of Crazy For You (through Aug. 17) is packing the Emerson Lake venue.

Ludwig offers a sly revamping of George and Ira Gershwin’s 1930 musical Girl Crazy, best remembered as the “let’s-put-on-a-show” 1943 MGM movie adaptation with Judy Garland and Mickey Rooney. Those show-biz clichés are still retained, as well as key Gershwin classics including “I Got Rhythm,” “Embraceable You” and “But Not for Me,” and yet there are some welcome additions that boosted Crazy For You into a Tony Award-winning Broadway smash in 1992.

The show quickly establishes the toe-tapping promise of young go-getter Bobby Child (Sam Lips), as he yearns to dance his way to stardom for Broadway entrepreneur Bela Zangler (Patrick Oliver James), who instantly dismisses him. Meanwhile, Bobby’s wealthy mom (SuEllen Estey), owner of a banking firm, threatens to chop his allowance unless he heads to Deadrock, Nev., to deliver an eviction notice to the folks who own a struggling theater-turned-post office.

Complicating matters is Bobby’s longtime fiancée Irene (LilyAnn Carlson), who wants to seal the matrimonial deal. But it doesn’t help that Bobby falls head over heels for Polly (Katerina Papacostas), the purty lady who runs the hapless Nevada business. When Polly catches wind that Bobby has a foreclosure notice, he impulsively dons a cape and Hungarian accent to imitate Zangler, thus fooling Polly. Then he convinces the Deadwood populace of slowpoke cowpokes to mount a Broadway-style revue. And that’s only the first act.

Things get progressively wackier in the second act, with Ludwig adding a dotty British couple named Fodor as they gather material for a travel book. Then Zangler shows up, which spurs a spot-on tribute to the mirror sequence from the Marx Brothers’ 1933 movie classic Duck Soup. And there are more songs ported over from the Gershwin catalog to ensure the good vibrations found in sophisticated Fred Astaire flicks, including “Nice Work If You Can Get It” from A Damsel in Distress and “They Can’t Take That Away From Me” from Shall We Dance.

Ludwig favors snappy wordplay and colliding character arcs, always lending a farcical tone to this tongue-in-cheek musical. An early scene indicates Zangler has a roving eye for chorine Tess (Lizz Picini), who rebuffs the married producer by asking about his wife, as he deadpans, “I’m sorry to say she’s in excellent health.” One running gag shows that while Bobby is a dynamic toe-tapper, he is occasionally a toe-stepper whenever he is with a dance partner. There is even a joke regarding the outlandish notion of creating a casino in the middle of the Nevada desert.

Director-choreographer Parker Esse’s breathless pacing never lets up in big-time production numbers such as “I Can’t Be Bothered Now,” with Bobby hoofing atop an automobile’s roof as eight showgirls pop out of the trunk, and the socko “I Got Rhythm” hoedown that climaxes the first act. Esse also has a firm hand with the comedic elements, notably the perfectly timed Duck Soup riff between Bobby and Zangler. Even the smallest bits earn major laughs; when the town lunkhead Lank Hawkins (Thomas Schario) declares to Bobby, “You are close to (being) an idiot,” Bobby takes one giant step away from him.

As the gotta-sing, gotta-dance lead, actor Sam Lips puckers up with several lovelies during the performance, yet his Bobby trips the light fantastic with incredible skill. And Katerina Papacostas is a swell eyeful who can hit the dance floor with aplomb and also delivers one-liners with a hillbilly accent. Merry-Go-Round’s boffo production of Crazy For You offers gags, gals and Gershwin: Who could ask for anything more?

Music, Culture, Art: Downtown Syracuse
Not Playing It Safe at Glimmerglass
To Top