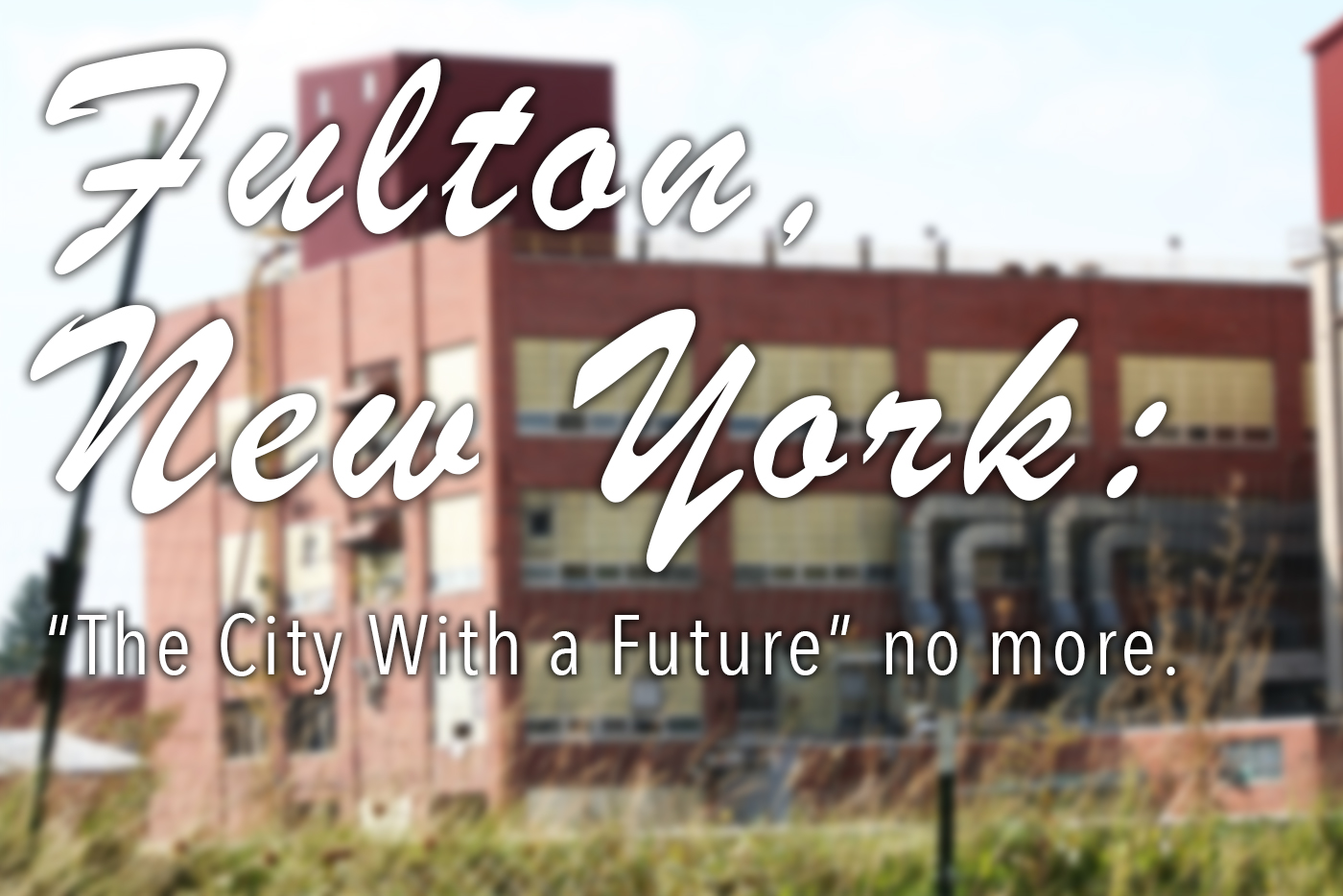 The city of Fulton is a shell of what it once was.

They say you can never go home again. In the case of Fulton, New York, you really can’t.

Although I’ve never resided within the city itself, I’ve practically spent half my life there, as it was the closest location of any store bigger than a gas station, and much of my family has lived in that area for decades. I know the place inside and out.

It’s also hard to say that I really left. I lived my entire childhood 12 miles away in neighboring Cayuga County and spent four years in college just up the road at SUNY Oswego. But now, I’ve spent a year away, in eastern New York, and recently drove through Fulton on a trip to see my parents after being away for more than six months. But it was the first time in many years that I really got a close look at Fulton, a city of 12,000 just 25 miles northwest of Syracuse. And it really hit me how much has changed.

Just before the city limits, I look to the left of Route 481 and see what used to be the Miller brewery, which closed a year after I was born, throwing 700 locals out of their jobs. Sunoco purchased the site to make ethanol in 2010, but has only made a dent in the damage done by Miller leaving. In a way, it made sense to see that building first, as the plant’s 1994 closing became a foreshadowing of the city’s condition since that time. The site of a former Kmart is seen in June 2016 at River Glen Plaza in Fulton, New York. Photo by Luke Parsnow

As I approach the city limits, I pull into the River Glen Plaza — which is now a nearly empty parking lot. I parked in a spot my mother probably would’ve parked years ago when we would go into Kmart to buy back-to-school clothes. A branch of Cayuga Community College now takes up a small portion of what were once the store fronts of P&C, Payless Shoes, Hallmark, RadioShack, Cutting Crew, Fashion Bug, Dollar Tree and the aforementioned Kmart. All were open 10 years ago and now all are gone, with Dollar Tree being the last to close its doors in 2014.

I pull out of the plaza and finally enter the city limits — and notice a newer, smaller welcome sign. The old one said “Fulton Welcomes You,” and underneath that, it said “The City With a Future.” That last part has since been removed.

Now, it’s not the city’s current economic stress that makes Fulton a sad story. What makes it sad is Fulton’s fall from grace; knowing what it once was and what it is now. This small city once represented America’s best. Businesses, jobs, payroll and prosperity in the community were unmatched across the country. The city was praised for its success in a 1936 article in The New York Sun with the headline “Fulton — The City the Depression Missed.” Unfortunately, what made it prosper is also what made it fall — industry. The Oswego River that divides the city was filled with factories and mills for centuries. The city itself was named after Robert Fulton — the inventor of the steam engine. But as industry and manufacturing jobs have plummeted nationally in the last 50 years, Fulton’s life and blood have now become its cancer.

As I drive farther into town, I get to see the trademark of the city’s industrial might — the infamous Nestlé plant. The first chocolate factory in North America under the Swiss name, this site gave life to this city for a hundred years. The Crunch bar and Nestlé’s Quik were both born here. You could actually smell chocolate in the air always right before it rained. The factory employed thousands of people across multiple generations. My own grandfather worked there. When the factory closed in 2003, the town mourned as if it were a family member. The building sat empty for 13 years until this spring — when its demolition began. I see some of the progress as I drive by — history being wiped away.

In an exclusive story on the closing, The New York Times begged the question that was on the minds of many Fultonians: “If Nestlé, with its proud history and heavy investments won’t stay in Fulton, who will?” Eight years later, the city lost another international chain — Birds Eye, laying off 300 workers. And when the jobs go, so do the people. Fulton’s population has decreased by 2,000 in the last 25 years. That may not sound like much, but it’s 16 percent of the population.

And it’s not just businesses. Just past the chocolate factory I can catch a glimpse of the corner of the former A.L. Lee Memorial Hospital. I went there when I broke my arm at age 7. The hospital closed in 2009 and now operates only as a small urgent care center. I’ve gone there for blood work since then. It’s mostly just a bunch of dark, empty rooms where lives were once saved.

There are a few holdout companies. Huhtamaki, formerly Sealright, remains near downtown, along with Interface Solutions, formerly Armstrong Industrial Specialties, where my father worked for many years. But I also lose count of the empty lots and “for lease” signs in rows of store windows.

There are a few locations as I make my way to the west side that I still remember being there growing up. They just look a little sadder now.

At the edge of town, I pass Wal-Mart, no doubt partly responsible for stealing many customers from Kmart and other retailers that led to its demise. Then the city slowly fades away in my rear-view mirror. Gone.

To be fair, Fulton’s problems began decades ago, but it’s amazing how much — just in my short lifetime — has changed. As I said, I really can’t come home to it.

But all of that still doesn’t make Fulton a sad story. What makes it a sad story is that there are thousands of Fultons out there all over the nation. There are many communities that have watched their own versions of Nestlé factories, hospitals and retail stores leave their towns and leave their townspeople jobless. Towns that used to be known for their high employment rates are now known for their high drug arrest rates. Small cities that once represented America’s best now represent its worst.

Yes, there are probably plenty of people who live where “the city with a future” is written on their welcome signs, but they can’t help but wonder if their city’s best days are, in fact, behind them.

Where Did All the UFO Sightings Go?
What Happened to the Political Middle?
To Top