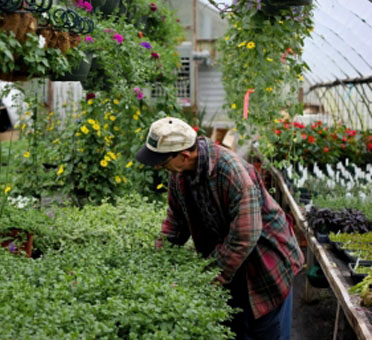 This year, the Szareks decided to grow ginger and turmeric, using rootstock from Hawaii.

Most “fresh” ginger at the grocery store comes from Jamaica, India, Africa and China. But there’s a new, much-closer source for fresh ginger: Szarek’s Greenhouses, of Westmoreland, harvested 187 pounds of fresh ginger this fall.

“Not bad for first-year ginger farmers in the Northeast,” says Denise Szarek, who operates the greenhouses with her husband, Bernie.

Szarek Greenhouses is a hydroponic operation noted for lettuces, Swiss chard, kale, heirloom tomatoes and a garden plant CSA program. No herbicides or pesticides are used.

This year, the Szareks decided to grow ginger and turmeric, using rootstock from Hawaii. In addition to the ginger, they harvested 50 pounds of turmeric.

Denise Szarek says the ginger is a curiosity – people are pleasantly surprised to see local ginger at the market – and a hit. It’s harvested immature, so it’s smaller than supermarket ginger, isn’t as gnarly and knobby and lacks mature ginger’s characteristic peel. The ginger is vacuum-sealed and frozen, so the Szareks will have a steady supply of it at the Westmoreland Winter Farmers Market (which the couple organizes) and other winter markets in Central New York.

Fresh ginger is at home in stir-fry dishes, in Indian cooking and in baking. Some people like to make tea with it. It is said to settle the stomach.

Fresh, unpeeled ginger, tightly wrapped, can be refrigerated up to three weeks and frozen up to six months, Szarek says. To use it, slice off a piece of the unthawed root (or shave/grate it) and return the rest to the freezer.

Turmeric, also native to tropical climates, is a relative of ginger. It gives both flavor and color to food. In this country, it’s best known as the spice that gives mustard its bright yellow color. In India, it’s a common ingredient in curries. The Szareks are selling turmeric in root form, which resembles long, thin “finers,’’ looks like fingers, Denise Szarek says. Look for the Szareks at the Westmoreland Winter Farms Market and the Poolville Winter Farmers Market.

For information about Szarek Greenhouses, visit here or call 853-5901.

Margaret McCormick is a freelance writer and editor in Syracuse. She blogs about food at eatfirst.typepad.com. Follow her on Twitter at @mmccormickcny