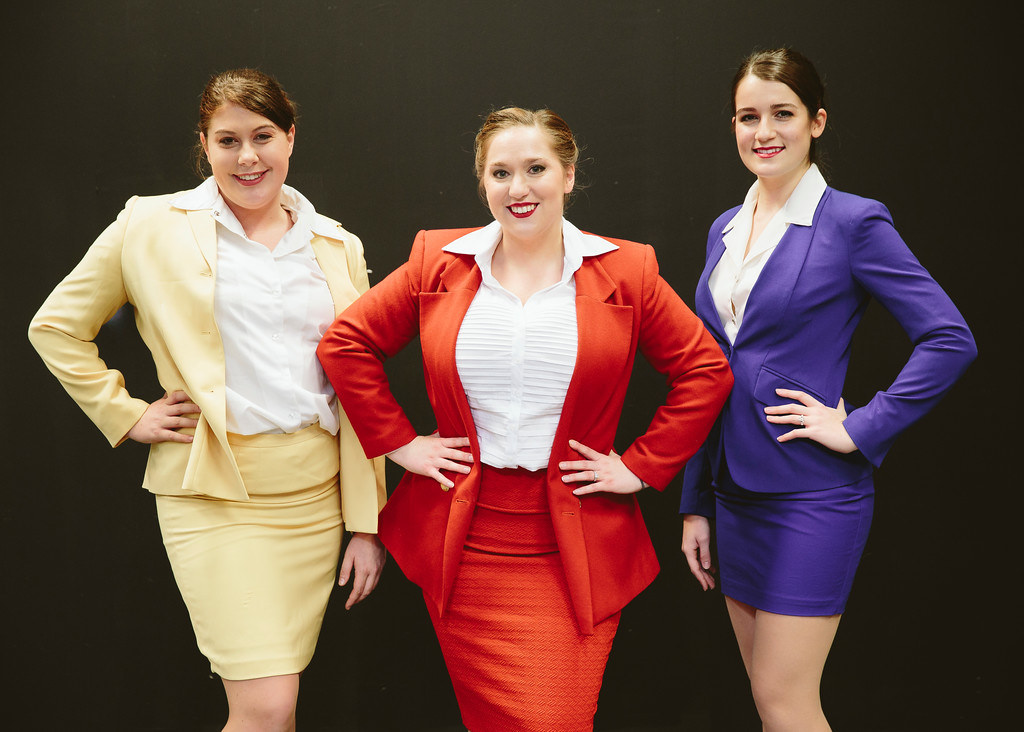 Ever since Central New York Playhouse moved into Shoppingtown Mall five years ago, it has launched every January with a madcap farce. Kind of a firecracker of hilarity against the darkness, frost and gloom. Some shows, such as last year’s One Man, Two Guvnors featuring Josh Mele, emerge as the strongest offerings of the year.

This year there’s nothing chancy about Boeing, Boeing (through Saturday, Jan. 27), the most reliable of all French bedroom farces. What’s different this time are all the new faces, including director Noelle Hedgcock and four female cast members.

Most audiences enter Boeing, Boeing with a pretty good idea of what’s coming: slamming doors, mistaken identities, split-second timing and the constant threat of exposure and humiliation. A Frenchman with an Italian name, playwright Marc Camoletti premiered his show in 1960, when the dial telephone was state-of the-art communication. It ran for 19 years. Englishmen Beverly Cross (husband of Maggie Smith) and Francis Smith launched the English version in London, which ran for 17 years.

Although it has never been neglected, Boeing, Boeing entered into its current popularity about 10 years ago, when multitalented actor Mark Rylance implicitly argued that the role of the protagonist’s friend Robert is one of the most dazzling to be found in the entire stage repertory.

Jet-set lothario Bernard (Derek Potocki) has worked out a scheme in which he spends nights of pleasure with different international flight attendants, then called “stewardesses.” In a small black book he keeps track of their comings and goings, which he checks against a thick record of all flights (a suspiciously 19th-century-looking tome). Against what we know about the predictability of flight arrivals today, Bernard assumes he can work his sexcapades indefinitely.

Although there is a sketch of the Eiffel Tower in his window, Bernard is somehow an American in Paris. Early in the action he is visited by an old pal from college, Robert (Christopher Lupia), who has come in from Wisconsin. Both Potocki and Lupia are freed from the responsibility of speaking in an accent, a burden most of the female players must bear. Bernard’s household servant, Berthe (Chelsea Lembo), and two attendants, the Italian Gabriella (Elizabeth Klink) and the German Gretchen (Liz Stanistreet), all speak in accents. The third stewardess, Gloria (Jessie Dobrzynski), the American from TWA, does not, to her disadvantage.

Boeing, Boeing runs about two and a half hours, long for a farce, in which the velocity of events going wrong (incriminating garments show up in inappropriate rooms, flights are cancelled) keeps increasing. For the first hour every mishap slams Robert in the kisser, and he is at pains to bring Bernard up to speed, who usually responds with a long-delayed wail. In other productions Robert has been tormented with physical misfortunes, such as the need to balance a vacuum cleaner, but here his response is verbal, with increasing volume and desperation.

Lupia’s Robert is a departure from his previous roles. Something of a star at Le Moyne College, he was impressive in demanding roles such as his turn in Bertolt Brecht’s Arturo Ui. His first directing assignment was the hyper-serious 1984 last August. Newbie director Hedgcock, a master’s degree student at Syracuse University, calls for deeper and sweatier exasperation, but Lupia has a few tricks of his own, such as an unexpected backflip when he seems to be nearing exhaustion.

Derek Potocki, one of the hunkiest players in community theater, has more often been an incisive supporting actor than a lead. We grasp immediately why the girls are all smitten with Bernard, but Potocki is not afraid to reveal that character’s fundamental selfishness and dishonesty. He provokes laughter here not so much for his anxiety as his deserved comeuppance.

While Bernard and Robert are mustering the heavy lifting, Chelsea Lembo as the hard-pressed and cynical Berthe is consistently stealing scene after scene, as she underplays whenever the men are blowing their tops. In her program notes, Lembo says this is her first role since returning to the area from Boston, but she has local credits that include a Talent Company production of West Side Story. Given the American love-hate relationship with all things French, Lembo whips her accent to get an extra measure out of every insult and putdown.

The three flight attendants turn out to be relatively thankless roles, alas, and Samantha Linnett’s costumes do not serve the ladies well. Having the most fun is Liz Stanistreet, younger sister of veteran player Lynn Stanistreet, as the pugnacious Gretchen from Lufthansa. Mel Brooks could have used her in The Producers.