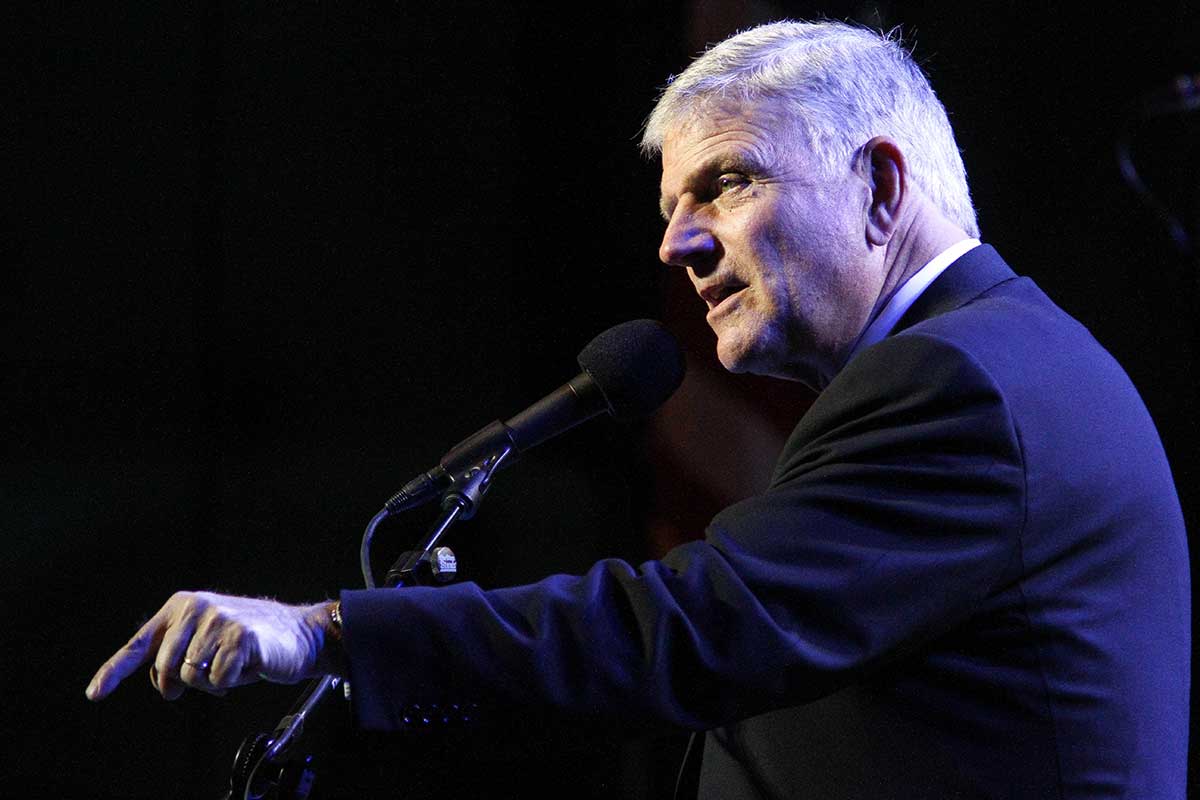 Evangelist Franklin Graham visited Central New York Thursday, May 30, the last stop on his Decision America Northeast Tour. He spoke to Renée K. Gadoua, Syracuse New Times contributing writer, Tuesday, May 28, while traveling from Rhode Island to Bridgeport, Connecticut. Here are excerpts of that interview, edited for clarity and length.

How do you think the tour going?

Better than I thought. The venues have been packed. In Portsmouth, they turned away hundreds of people.

People have to make a decision about God. Are they going to accept him as a savior or are they going to reject him? I want them to know that if they accept God as their savior, their sins are forgiven, God comes into their heart and they are a new person. You can have a new life.

It’s not about politics. We’re not in an election year. We’re certainly not campaigning for anyone.

You just announced the June 2 prayer day. What’s your hope for that?

Asking people to pray for the president is not political. It’s not an election year. All our politicians need our prayers. The government needs our prayers. We’re right now at a point in our history when there are unprecedented attacks on the president. It was collusion, collusion, collusion. When the Mueller report came out, there was no collusion. Now they’re going to look for something to charge him with.

Our country is so broken. Politicians’ hearts are full of hatred. Trump cannot survive unless God is with him. No president can survive with this onslaught. If he survives, we all benefit. If God guides him, it’s good for all of the country.

I’ve never seen the level of hatred that we see today and the level of viciousness that the media has. We’re praying that God will lead him and direct him.

What do you say to criticism that this day of prayer and Decision America tiptoe at the border of church and state separation?

This doesn’t have anything to do with church and state. God commands that we pray for those in authority. I’m just praying that God would lead him, direct him as he makes decisions that affect all of us.

In 1989, when your father led a six-day Crusade in Syracuse, you said you didn’t want to be compared to him. How do you think that’s played out?

I can never fill my father’s shoes. He was a bigger-than-life type of person that God used in the 20th century. I’m very grateful to my father for his leadership and faithfulness to God.

Some people say your father was kinder and gentler and you’re much more direct. Is that a fair assessment?

My father, when he was younger, was pretty aggressive and direct. When he got older, he was a little softer. That happens with age. He had a relationship with every president from Truman to Trump. There was no pastor who had that kind of influence. The little interaction I have with presidents I try to keep to spiritual issues unless they ask me about anything else.

How do you think your father would assess your work and your style today?

The world is so much different today than in the middle of his ministry in the 1960s and 1970s and into the 1990s. We are living in a world where everything is instant communication. We have to approach things differently. The Gospel is the same. The human heart does not change. The message that I preach can change the human heart.

How open are people today to that message in a much more diverse world?

The more diverse we become, the more connected we come. I think the loneliness of the human heart is even greater than it’s ever been. I don’t know why that is. We have our friends connected at our fingertips.

I think that loneliness comes from an emptiness in a person’s heart. Money does not satisfy. People look to sex thinking, “Sex will make me happy.” You can have happiness or joy for a moment, then there’s emptiness. People look to drugs. That doesn’t satisfy. God fills that void and that emptiness is satisfied.

Your father soothed the nation following 9/11. What is the role of spiritual leaders in today’s divisive atmosphere?

I think it’s God that can calm a person’s heart. After 9/11 when my father spoke at the National Cathedral, his words were from Scripture. We take God out of the government. We take him out of the public sphere.

Many of these socialist candidates think God belongs only in church and not in the public sphere. They want to restrict the voice of God to the four walls. That’s why I think it’s important to pray for our president and our nation. There’s no hope outside of God.

What message do you have specifically for Syracuse?

Syracuse has so many problems as a city. I know there are many people who feel they have no hope. I want the people to know God does love them and has not turned this back on them.