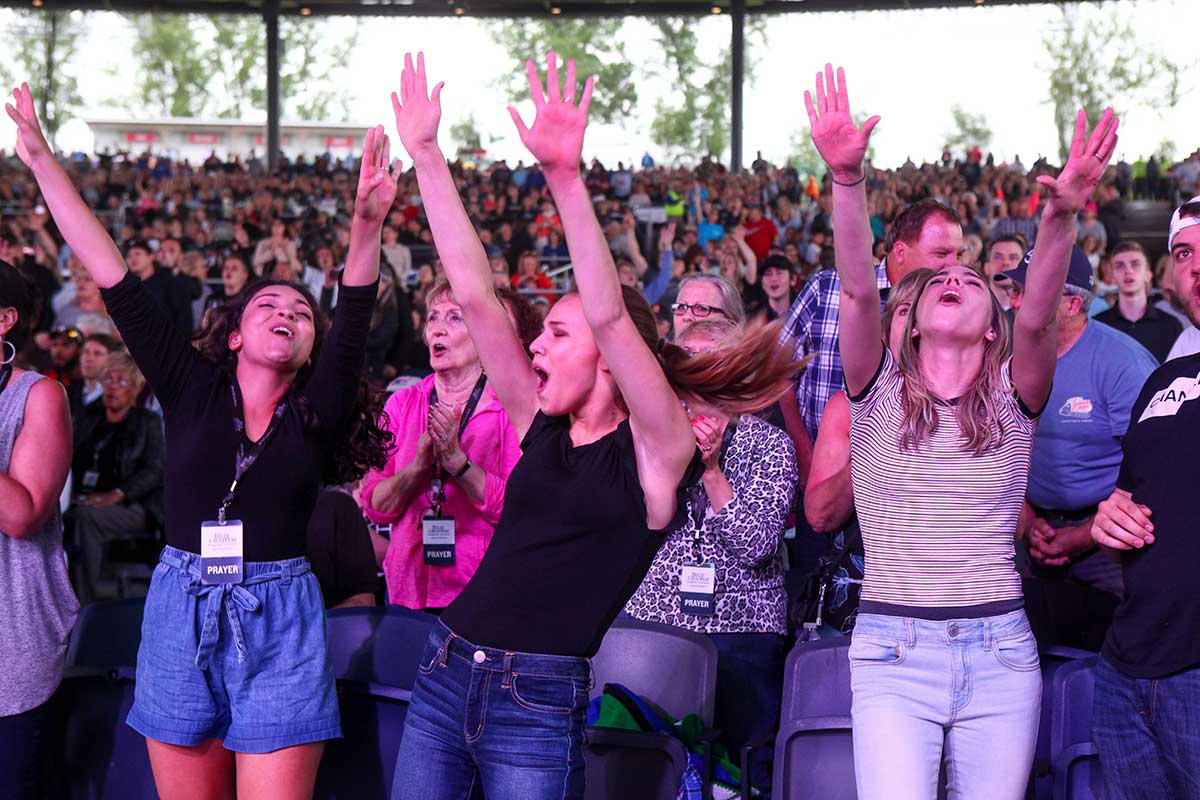 The Rev. Franklin Graham, son of the late evangelist Billy Graham and evangelical lightning rod, opened his Thursday, May 30, Central New York appearance explaining that he called for a national day of prayer for the president of the United States because “the Bible commands us to pray for those in authority.” Amid applause he said, “This is not an endorsement.”

The younger Graham’s comments came at the St. Joseph’s Health Amphitheater at Lakeview, the final stop of the Decision American Northeast Tour. About 6,400 people attended, the largest turnout in seven cities since May 19, according to The Billy Graham Evangelistic Association (BGEA). Billy Graham, who died Feb. 21, 2018, at age 99, drew 103,000 people over six nights at the Carrier Dome in 1989. At least 15,000 people attended the June 2018 Dave Matthews Band concert at the amphitheater.

Related: Franklin Graham Q&A: Do you want to have a relationship with God?

Hundreds of people were already seated inside the amphitheater by 5:40 p.m., 20 minutes before the gate’s official opening for the 7:30 p.m. free event. People lined up at tents for free T-shirts; volunteer prayer counselors stood at the ready. The crowd, predominantly white, included dozens of people in wheelchairs and dozens of people pushing babies in strollers. Several people wore T-shirts with sayings including “Not today, Satan” or “Got Prayer?”

“I’m here to receive a blessing,” said Kofoworola Olaosebikan , assistant pastor of Redeemed Christian Church of God in Syracuse. “If God blesses me, I will bless others. Whatever I receive I will pass on.”

She was there with her husband, Aaron Olaosebikan , senior pastor at Redeemed Christian Church of God in Rochester. The two are natives of Nigeria who have lived in the United States four years. Aaron Olaosebikan, long an admirer of Billy Graham, was ready to pray with people moved by Franklin Graham’s words and invitation to accept Jesus Christ. Allison Loomis of Fulton and Allison Parker of Martville, best friends who attend Cayuga Community College, heard about the event at Calvary Church, Syracuse. Neither knew much about Franklin Graham, but both are fans of the three-time Grammy-nominated Christian musician Crowder.

“I love the lyrics,” said Loomis, who wore a necklace with a heart circling a cross. “They really speak to me. I’ve never heard of him. I love the messages in the music.”

The two sang with Crowder: “Lay down your burdens/ Lay down your shame/ All who are broken/ Lift up your face.” Hundreds of people stood and swayed to the music, some raising their hands in praise. Crowder put on a show at the St. Joseph’s Lakeview Amphitheater for the Decision America tour. (Michael Davis/Syracuse New Times)

letters, an American flag and a large red lobster. The seven cities on the tour are among the most “post-Christian” cities in the nation, BGEA said, citing a 2017 study by the Barna Group, an evangelical Christian polling firm.

Barna cited declining church attendance, religious affiliation, belief in God, prayer and Bible reading as evidence that “the role of religion in public life has been slowly diminishing, and the church no longer functions with the cultural authority it held in times past.”

White Christians, once the country’s dominant religious group, accounts for fewer than half of all adults in the United States, according to the Public Religion Research Institute’s (PRRI) 2017 report “America’s Changing Religious Identity.” White evangelical Protestants voted overwhelmingly for Trump in 2016; the group continues to be Trump’s strongest supporters, according to PRRI.

In interviews and at his prayer service, Graham insisted Decision America and the day of prayer are not political. But some say Graham is using prayer for pro-Trump propaganda.

The day of prayer “is a near-perfect embodiment of political evangelicalism in the Age of Trump,” Daniel Burke wrote last week for CNN.com. “It blends Christian nationalism, the idea that the United States has a special place in God’s plans and Trump is God’s agent; social media, where it’s hard to separate the wheat of grassroots support from the chaff of Russian bots; and it has seriously irked Christians who say Graham and others have sold their souls for a mess of political pottage.” No one at the amphitheater appeared to question Graham’s motives. The crowd applauded and cheered as Graham listed sins for which to repent: lying, adultery, same-gender sexual activity, murder, abortion. “Culture has changed. Our country is changing,” he said. “Politicians come and go. God’s laws don’t change.”

After preaching about 20 minutes, Graham invited people to “Come stand right here in the front and we’ll have a word of prayer together.” Hundreds of people, some crying, crowded the front of the stage and the aisles. “You’re not coming to Franklin Graham. You’re coming tonight to God and you’re putting your faith in his son Jesus Christ.”

As quiet conversations and prayer circles emerged across the amphitheater, Graham left the stage. “I may not be back to Syracuse. If not, I’ll see you in heaven,” he said. “To God be the glory.”