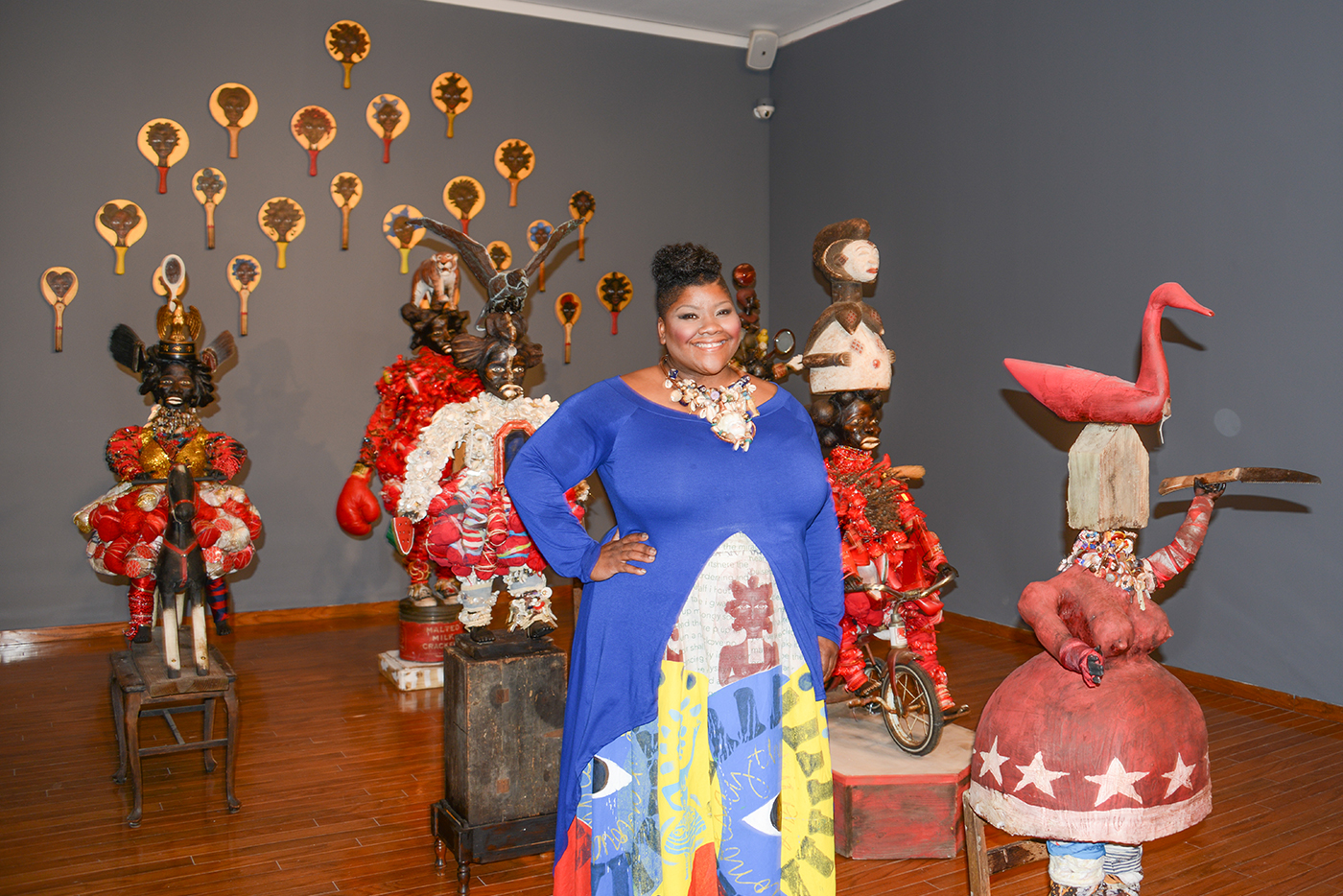 Now she’s showing her work at the Everson Museum of Art in the format of a solo exhibition, de.structive dis.tillation, which explores notions of race, identity, mass culture. It also documents German’s stock in trade: her ability to challenge viewers, to integrate diverse influences, to recycle everyday items.

The exhibit begins in the museum’s Sculpture Court with 20 of her sculptures, best described as protectors or power figures. Each has its own face and hairstyle; each stands on a wooden box or table usually topped by a bicycle or skateboard. Each is equipped with “armor,” objects ranging from watches and keys to coffee packets, from images of the Virgin Mary to toys depicting an elephant or bird.

There’s no template for these sculptures. In one instance, German works with a bevy of cowrie shells. In another, she’s placed small African sculptures on the protector’s head. In a third, the figure holds a doll with African-American features and has purses wrapped around her. A fourth power figure is decorated with a clock, lantern, whisk brooms, and a small female figure inside a cage.

The sculptures are called female warriors but don’t wield weapons such as a rifle or sword. Instead, they are supposed to communicate spiritual energy and help communities deal with conflict and discord. Indeed, German has referred to them as an army of healers, an army of weepers.

They are dressed with objects that the artist and her helpers typically find on curbs in the Homewood neighborhood of Pittsburgh: mirrors and nails, glass bottles and electrical sockets. Those familiar items appear in a different visual context, influencing viewers to consider both their role in a specific sculpture and the concept of what’s commonplace.

To make that connection, the sculptures have to fully engage the viewers. German has no problem reaching out to an audience. She’s made vivid, sometimes eye-popping artworks, each of which has its own personality. In addition, the pieces generate an illusion of movement; it’s easy to imagine them thrusting forward.

The exhibit also presents six additional power figures in the Robineau Gallery, in the same room as four photographs and 22 adorned paddles created by German. The six figures, all with some form of red color, further document the artist’s imagination. One figure rides a tricycle and has a medium-sized African sculpture on her head.

In the Wampler Gallery, there’s a selection of German’s black Madonnas, 45 small paintings of African-American women. Each is positioned on a page cut from Black Beauty, a well-known book first published in 1877.

Beyond that, three altarpieces, decorated with rhinestones, hang on the gallery’s wall. The most interesting of the trio combines disparate objects: shells, tiny dishes, campaign buttons for Adlai Stevenson and John F. Kennedy, small lids for containers of pressing oil, an image of God the Father as might be seen in an Ethiopian church. It’s a fine piece.

The exhibition continues what is a very productive time for Vanessa German. She exhibits her work not only in her hometown of Pittsburgh but also at venues like the Wadsworth Atheneum Museum of Art in Hartford, Conn. She has a track record of activism, as demonstrated by her involvement in anti-violence campaigns and her founding of ARThouse, an after-school site for children in her Homewood neighborhood. Lastly, her artworks are influenced by her social concerns, her profound interest in icons, and her commitment to doing work that’s drastically different.