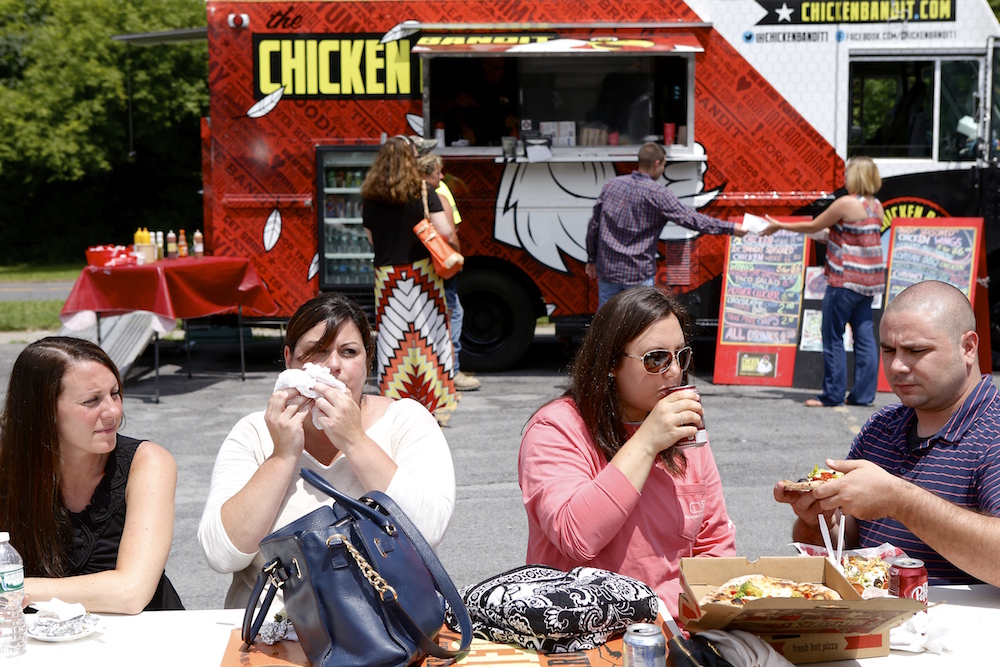 Food truck vendors are off to an early start in 2016.

March came in like a lion last week. But that didn’t stop the owners-operators of the Chicken Bandit and PB&J’s Lunch Box from setting up their respective food truck and food trailer outside Eastwood’s Palace Theatre on James Street to feed Friday night’s Syracuse Area Music Awards (Sammys) crowd.

March weather is too unpredictable to venture out on a regular basis, but Sanford was excited to kick-start the food truck season. “We decided why not? We’ll just be a little cold.” George Shattuck, who operates Shattuck’s Paddy Wagon, is dusting off his shamrock-festooned trailer for St. Patrick’s Parade Day at the Cosmopolitan Building, 1153 W. Fayette St., on Saturday, March 12, 11 a.m. to 11 p.m. The $10 admission at the door gets you entertainment by 10 bands (courtesy of L.R.S. Records). For an extra charge, you can get a sneak preview of the Cosmopolitan beers being made on site by the Stout Beard Brewing Company (currently a distribution-only brewery; a tasting room is in the works) and food by the Paddy Wagon, including Shattuck’s signature sriracha tater tots.

Last year, local food truck operators joined forces to form the Syracuse Food Truck Association and organize regular gatherings and locations. The Cosmopolitan Building, owned by Cosmo Fedrizzi, was the site of weekly “food truck rodeos” during the spring and summer, but those aren’t on the agenda for this year.

“The plan this year is to host events like you see for the parade day,” Shattuck said via email. “It is up in the air as to doing rodeos on a weekly basis, more likely we will bring food trucks as per event. Cosmo and I are thinking about some other ideas, such as guest chefs in my food trailer and pop-up food events.”

Food truck operators like Cindy Baker and Dennis Souva, of the Chicken Bandit, Sanford of Toss ‘n’ Fire Pizza and Pat Orr of PB&J’s Lunch Box are looking ahead to a full season of food truck rodeos at the Lyncourt Plaza, 2301 Teall Ave. They, along with the Stir Mobile Eatery and hopefully a couple others, have permission from the town of Salina to set up on Wednesdays, 11 a.m. to 3 p.m., from April to October.

The off-season has been productive. In February, Orr took over the tiny restaurant space at 989 James St., in the Imperial Gardens apartment building, to open a “brick and mortar” location called PB&J’s Lunch Box on James. The spot that formerly housed Stevie’s Street Eats and later Paul’s Street Eats has been painted, freshened and reconfigured slightly to create better flow and more efficient use of space in the kitchen and counter area. Focal point of the seating area, which has room for about 12, is a giant chalkboard menu.

Joining Orr is head chef and kitchen manager Kelly Robertson. The standing menu includes “everyday favorites” like Orr’s award-winning grilled peanut butter and jelly sandwich and muffuletta and turkey club sandwiches. Grilled cheese devotees will find a “huge” grilled cheese made with American and cheddar cheeses and an always changing “grilled cheese of the day,” as well as specials like blackened haddock tacos (a recent Friday special) and quesadillas.

The Lunch Box is open Mondays through Fridays, 8 a.m. to 6 p.m., with breakfast sandwiches, homemade muffins and coffee in the morning and early-bird supper offerings later in the day. Eat-in or get something to go. Call 476-3287 or visit facebook.com/streeteatssyracuse.

New this season at Toss ‘n’ Fire is a second pizza rig, an enclosed trailer that will be used at festivals, markets and other events and will extend the season for Sanford and his crew. The rig arrived just before last Saturday’s collaboration with Willow Rock Brewery.

Toss ‘n’ Fire is noted for its Neapolitan-style pizzas, built on a thin crust made with flour imported from Italy. Sanford has been working on new offerings, including a white clam pizza with bacon, garlic and olive oil that will show up on his menu this season along with “greatest hits” like the Margherita pizza, Fig ’n’ Pig and ‘Cuse Salt Potato pizza.

The Chicken Bandit will be back at its downtown spot, near Armory Square’s Museum of Science and Technology, in addition to the weekly food truck rodeos and a variety of special events. Cindy Baker has been working on new menu items such as chicken and biscuits and chicken chili. “Cindy cooks and tries new things out … I eat,” partner Dennis Souva says of the off-season.

The newest member of the Syracuse Food Truck Association — just in time for warmer weather — is The Cremeria, a mobile gelato business operated by the Macrina family. For more information, visit thecremeria.com.

To keep up with the scene, visit the Syracuse Food Truck Association’s new web page at syrfoodtrucks.com or check out facebook.com/syracusefoodtruckassociation.

And mark this on your foodie calendar: The Syracuse Food Truck and Craft Beer Festival will be held May 21, 11 a.m. to 7 p.m., at the New York State Fairgrounds, 581 State Fair Blvd. The event will feature dozens of food trucks and craft beer brewers from across the region and state. It’s part of the Food Truck Festivals of America Tour. For a complete list of festivals, visit foodtruckfestivalsofamerica.com.