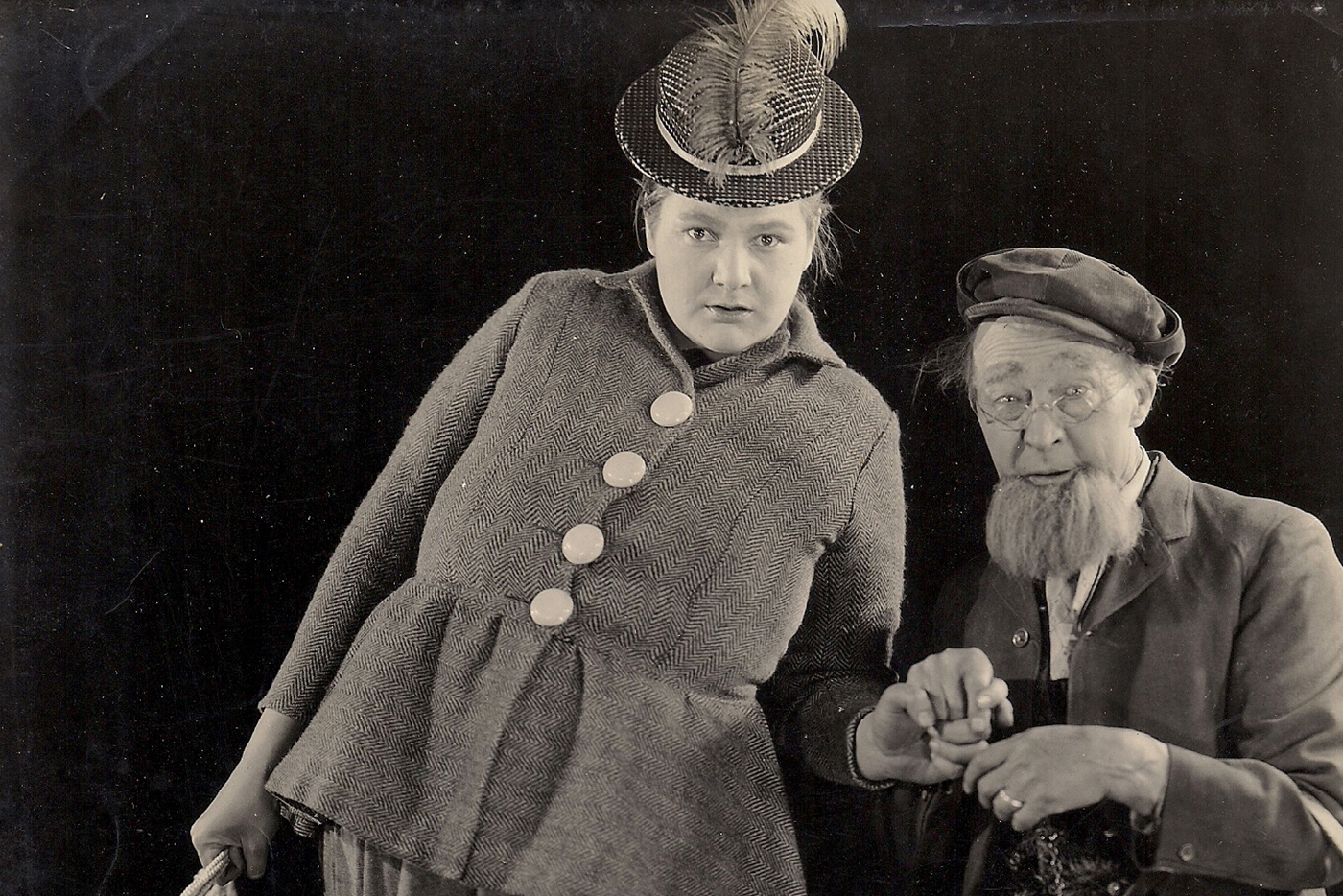 A condemned Syracuse house triggers movie memories of a silent-film actor and his extended family.

Since 1979, Montgomery County Community College history professor emeritus Joseph Eckhardt has been researching the history of the early silent movie industry in the Philadelphia area.

Eckhardt has been breathing life into the little-known history of the Betzwood Film Studios. According to Eckhardt, “In the early boom years of moviemaking, the world’s largest, most advanced film studio was located on the banks of the Schuylkill River in Montgomery County, Pa.”

Last month, while researching the history behind 910 Onondaga Ave. for my Instagram account, @SyracuseHistory, I discovered one of the former owners was a man named Fred Grassman. This discovery plunged me directly into the work of Eckhardt and the history of the early silent movie industry he has worked so hard to preserve.

Fred Grassman, born in Syracuse in 1859, was the son of German immigrants. A contractor and builder, Grassman operated in the Central New York area for more than 40 years. According to his obituary, among the many buildings he helped erect were the Snowden Apartments and St. Joseph’s Hospital.

Grassman grew up in a house on the corner of Peach and North West streets, near what is now West Belden Avenue, just outside of downtown, where I-81 now travels. He had several siblings, including an older brother, Dan Mason.

Born in 1853, Mason attended Prescott School on Willow Street, where his knack for comedy was immediately noticed. As a child, Mason performed shows for his classmates in a brick barn behind the back of the building. He originally set out to be a pharmacist and began working at Kenyon & Potter’s drugstore on South Salina Street upon completing his education, but he couldn’t escape his true talent.

Mason began a stage career in 1872, initially performing in local vaudeville shows. Most noted was his role as “Rudolf” in a German dialect routine called “Adolf and Rudolf.” The soon-to-be-demolished 910 Onondaga Ave. home where Mason spent some of his final days in 1928. Michael Davis photo

Soon enough, Mason was making appearances in musicals and plays, both locally and on the road. He often wrote his own material, made his own costumes, and performed both short skits and full-length shows.

When he first began performing, he changed his last name from Grassman to Mason because “his mother was afraid the family would be scandalized and embarrassed by his appearance on the stage,” said Eckhardt.

Fortunately for him and his family, the truth was quite the opposite, but the new name stuck. As Dan Mason’s popularity grew, Syracuse embraced him as their native son and local newspapers celebrated his return each time he was home for a visit, often mentioning his original name.

Around 1910, Mason decided to explore the opportunities being offered by the newly forming movie industry. By 1912, he landed his first few movie roles, working for the Edison Motion Picture Company. According to the Betzwood Film Archives, Mason played eccentric and character roles, established a reputation as a fine actor and began extensive travel for his films.

By the time he arrived at the newly established Betzwood Film Studios in Montgomery County, Pa., in 1919, he was a seasoned veteran with decades of experience.

Mason had been cast as “Skipper” in the Betzwood Toonerville Trolley comedies, a movie version of the cartoon by Fontaine Fox. It was there, on the set of the Toonerville Trolley films, that Mason met Wilna Hervey, his 6-foot-3 co-star, who won the role of “The Powerful Katrinka,” thanks in part to her impressive size.

When filming started, Mason was just months removed from the death of his wife of 33 years, Millicent Page. Hervey, acting against her parents’ wishes, was relatively new to film.

The two struck up a unique friendship that positively contributed to both their emotional states and their onscreen chemistry.

In 1920, Dan sent for his daughter, Nan Mason, to join him in Pennsylvania. At the time, Nan was living in New York, alone, and agreed to keep her father company in a house near the studio.

Nan, a large woman as well, was introduced to Hervey and so began a relationship that would last a lifetime.

Eckhardt’s 2015 book, Living Large: Wilna Hervey and Nan Mason, is a dual biography highlighting the journey of Wilna and Nan as “one of America’s earliest out and proud same-sex couples.”

Seven years in the making, the book provides extensive details surrounding the couple’s life of adventures and their impressive careers as artists in the famed artist colony in Woodstock, where they ultimately moved together a few years after the abrupt end of the Toonerville series in 1921.

In the book, Eckhardt describes Mason’s adoration for Nan and Wilna, whom he called his “daughters.” “The relationship had his full blessing; either he was very progressive for his time, or he was clueless,” joked Eckhardt.

After the Toonerville series, Mason returned to California where he continued his career in the film industry. His IMDb profile credits him with more than 130 films.

According to the letters acquired by Eckhardt, Mason would often write to his brother, Fred Grassman, in Syracuse, and ask him to “go check in on the girls” in Woodstock.

The girls and “Uncle Fred,” as they called him, often exchanged letters and visits as well. Eckhardt explains that in one visit, when Nan and Wilna were taking the train to Hollywood to see Dan, “they went by way of Syracuse and Fred and his wife were on the platform there just to see them for five minutes and give them a basket of goodies for the trip.”

Eckhardt added, “The girls were quite naive and notoriously mercurial and Dan took some comfort in knowing his brother was there to offer advice. Not that they always took it.”

By 1927, Mason’s health was worsening with age and the girls pleaded for him to retire and come live with them on their new farm, outside Woodstock, in Bearsville.

A frugal man, Mason had a good deal of money but hated wasting it, especially during the years after the Great Depression. His motto was, “Why buy something, if you can’t live in it or eat it.” It was a marked contrast from Nan and Wilna’s travel-happy, whimsical lifestyle.

In 1928, while still in Hollywood, Mason contracted pneumonia. Unwilling to pay for a doctor, he decided to return to Syracuse to stay with his brother Fred at 910 Onondaga Ave. The local papers mistakenly reported he was home to perform.

Sadly, Grassman’s home quickly turned into a hospice. Unable to continue his vibrant existence, the ailing Mason stayed with his brother for nine months. “It was a grueling existence for a man always on the go,” said Eckhardt.

In 1929, Nan drove to Syracuse and brought her father to their Bearsville home. On July 6, 1929, Dan Mason died at age 76. He was buried in Hackensack Cemetery in New Jersey.

Mason’s obituary in the July 7, 1929, edition of the Syracuse Herald acknowledged his many accomplishments while “remaining always the same man”.

Nan Mason and Wilna Hervey would go on to live astonishing lives full of love, friends and fun. They are respectfully known as the famous “Big Girls” in the Woodstock region. Their identical tombstones read, “Artist.”

Fred Grassman, who passed away two years after Dan, is buried in Woodlawn Cemetery in Syracuse.

Fred’s former home at 910 Onondaga Ave. remains but stands in ruins. The home is currently owned by the Greater Syracuse Land Bank, a nonprofit created by the city of Syracuse and Onondaga County to address the problem of vacant, abandoned, or tax delinquent properties in Central New York. Structurally compromised and unfit for renovation or reoccupation, the home will be demolished this year.

I recently was able to access the home where Fred Grassman lived and Dan Mason spent many of his final days, a practice Eckhardt says has been doing for years. “I like to get as physically close to the people I write about,” he says. Eckhardt mentioned his recent travels to see where the girls lived, noting the abnormally high counter tops.

While the tangible connection to Syracuse’s Dan Mason and the famous artists from Woodstock will soon be lost, the story doesn’t need to end. Working on another book, this one dedicated to Dan, Eckhardt says, “I’ll have to do something with this Syracuse phenomenon. The story passes right through it.”