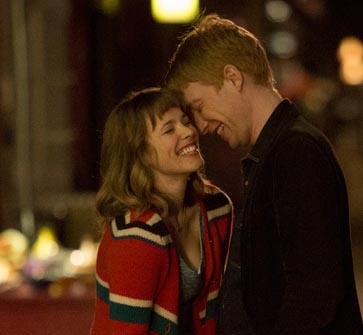 The first time I saw the trailer for “About Time,” I thought: “Groundhog Day: The Love Story.” Only instead of the familiar old bit in which Bill Murray opens his eyes and starts the same day over and over against his will, this escapade written and directed by Richard Curtis features a young man who discovers a secret power that’s been passed along to the males of his family. Tim can travel back in time when he chooses to.

“About Time” is described as a British romantic comedy, drama and sci-fi fl flick.

The trailer proves that, indeed, all of the above is crammed into this one. Domhnall  Gleeson plays the 21-year-old who vows to use this tool as a way to make the world better … and charm Mary, played by Rachel McAdams, to be his wife in the process. Bill Nighy plays the watchful dad.

Also opening this weekend is “Thor: The Dark World.” Again taken from the pages of Marvel Comics, the fantasy/action/adventure sequel directed by Alan Taylor also goes back and forth in time. Thor, reprised by Chris Hemsworth, must thwart an evil that’s been lurking for 2,000 years. Jane, reprised by Natalie Portman, finds modern times trouble while waiting for Thor’s return. Thor’s father, Odin (Anthony Hopkins) does not want him to sacrifice everything and return to Jane.

Finally, “12 Years a Slave” gets its Syracuse opening. The docu-drama directed by Steve McQueen, addresses the story of Solomon Northup, a free man from upstate New York who gets abducted and sold into slavery in the pre-Civil War south. The trailer is chilling as Chiwetel Ejiofor portrays a man fighting for his rights and life in a part of the U.S. that wants to afford him neither. Michael Fassbender plays the cruel slaveowner, and Brad Pitt is an abolitionist from Canada.

And a child shall sit at the top of the world.

“Ender’s Game,” the sci-fi thriller in which Asa Butterfield summons up the courage and know-how to save mankind, topped the box office charts for the weekend of Nov. 2 with a gross of  $27 million. With a sneak preview start, that put it at $32.1 million, according to hollywood.com.

“Jackass Presents: Bad Grandpa” had another good weekend, standing at No. 1 with a gross of $20 million. The MTV spinoff now stands at $199.6 million overall. “Last Vegas” and “Free Birds” were Nos. 3 and 4, with weekend grosses of $16.3 million for the seniors taking over Vegas and $15.8 million for the turkeys taking over Thanksgiving.