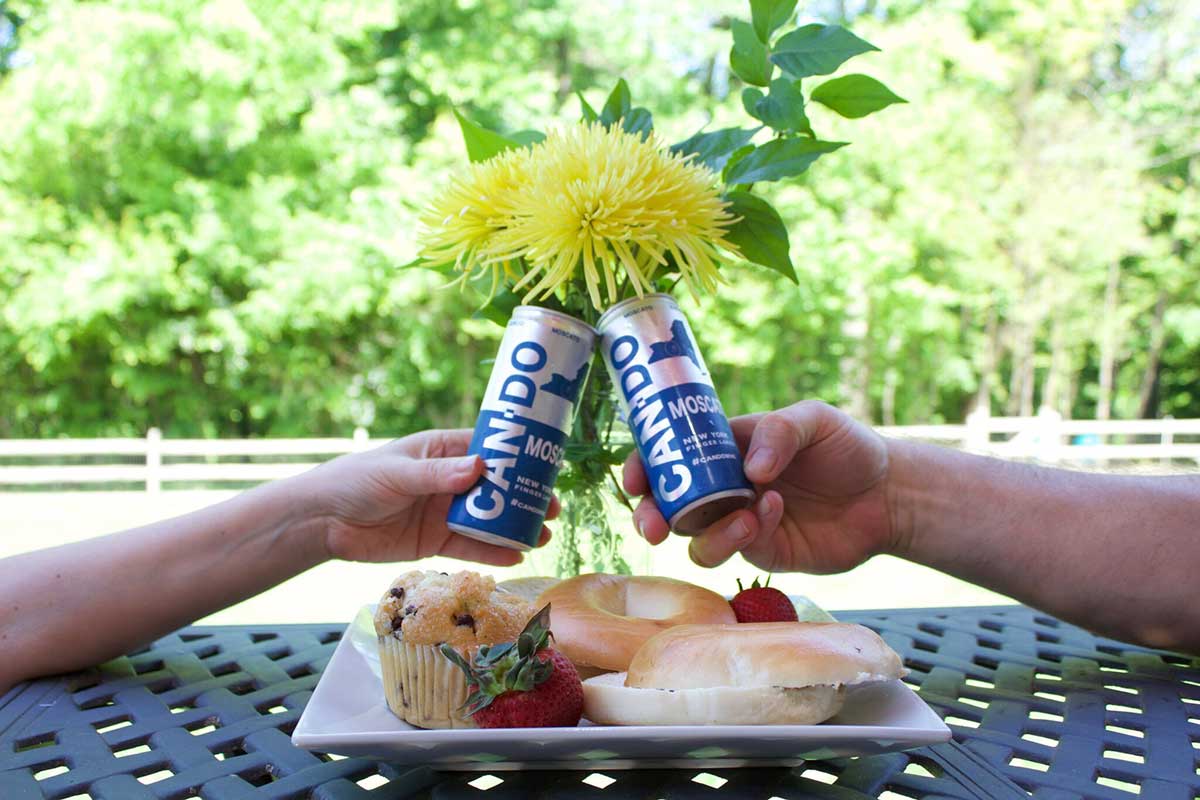 Mike Countryman has been growing grapes and making wine in the Finger Lakes for more than two decades. But until recently, he never thought about putting wine in anything other than bottles.

Countryman is the winemaker and vineyard manager at Point of the Bluff Vineyards, near Hammondsport, on the west side of Keuka Lake. This year, the winery, known for its Riesling and other European-style wines, added an enclosed concert pavilion up the hill from the tasting room. It’s a rustic venue with sweeping lake views and no seats; concertgoers stand on the floor and can purchase beverages and food at a bar.

With summer sipping in mind, they also decided to add an unbreakable, fun and convenient option to their roster: three varieties of wine in 375 ml (12-ounce) cans. In doing so, they became the first winery on Keuka Lake to offer wine in cans.

Three varieties of “Hangar 17” canned wines are available, for now: a dry Rosé, the classic summertime picnic wine; a blend of Chardonnay and Riesling; and a sweeter white, a blend of Traminette and Riesling. The cans sell for $9 and are the equivalent of two and a half glasses of wine.

“There’s no glass and you don’t need a wine opener,” Countryman says. “It’s such a convenience in the summer if you’re going out on a boat or to a park to put cans in a cooler. People are really enjoying them. It’s a fresh concept.”

Visit a liquor store and you’ll find cocktails in cans and a multitude of national-brand still and bubbly wines in mini-bottles, small-size packages and in cans. Canned wine from the Finger Lakes is relatively new. It began to make a splash last year, when the Can Do line of canned wines hit the market. Can Do is a project of Bellangelo Winery, on the west side of Seneca Lake.

Before summer was over, several other Seneca Lake wineries had introduced wine in cans, including Fox Run Vineyards, with its On the Run series (unoaked Chardonnay, semi-dry Riesling and Arctic Fox, a wine made from Cayuga grapes). Meanwhile, Zugibe Vineyards and Lakewood Vineyards, also on Seneca Lake, introduced thin, single-serving cans of sparkling wine.

You might also have seen Vinny, a canned sparkling wine made with dry Riesling and Gruner Veltliner from Seneca and Cayuga lakes, available by the four-pack. Vinny is a project of acclaimed sommelier Thomas Pastuszak. New to the Vinny line this year is a sparkling dry Rose.

Bellangelo is known for its award-winning artisan wines. Co-owner and winemaker Christopher Missick says Bellangelo entered the canned wine market to capture a segment he thought they were missing, specifically young people, who tend to drink wine more casually: poolside, on boats, at concerts, around campfires, after a hike.

Can Do made its debut with 500 cases of dry Rosé and Moscato and nearly sold out within a month. This year, they will can 4,000 cases and are introducing smaller cans. “Production has really grown,” Missick says.

In addition to the dry Rosé and Moscato, the Can Do line now includes a Chardonnay and Patriot, an Alsatian-style blend of Traminette, Cayuga and Valvin Muscat. The cool-climate wines of the Finger Lakes lend themselves well to canning and quick consumption, Missick says. These are wines that are ready to drink — not for aging in a cellar.

To those who say good wine can’t possibly come from a can, Missick says this: “Most people are surprised to learn we’re really trying to put high-quality wine in a can. It is, as I always say, wine I want to drink as a winemaker. Once you try it, your eyes will be opened.”

It might appear that all the cool kids are making and drinking canned wine now. Yet these are “anytime, anywhere wines” for people of all ages, folks who don’t want to fuss with a corkscrew and those who simply want to enjoy a glass or two — not a full bottle.