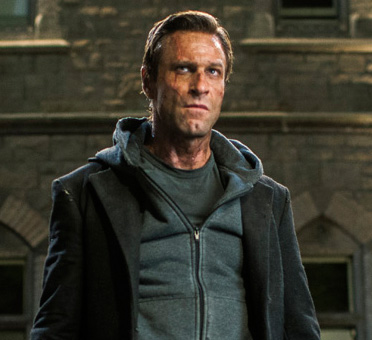 Aaron Eckhart plays a scarred monster in graphic novel take on a classic.

Demons and gargoyles and Adam, oh, my.

When the wings came out in “I, Frankenstein,” and the members of the Gargoyle empire morph from people-looking creatures to take flight, I couldn’t help but be reminded of the frightening flying monkeys of “The Wizard of Oz.”

Although one side in this battle between the Demons and Gargoyles may indeed end up with a metaphorical house falling down upon them.

This horror flick is a quick-moving, 93 minutes of good vs. evil, with man-made monster Adam Frankenstein placed squarely in the middle.

The story, written by Stuart Beattie, was adopted from the graphic novel by Kevin Grevioux. As the director, Beattie filled it to the brim with fire, brimstone, big special effects and darkness.

Mary Shelley-worthy, it is not.

Aaron Eckart is duly serious as Adam Frankenstein, 200 years removed from his creation by Victor Frankenstein, who did Adam wrong by not fulfilling a promise and paid the price.

First Adam comes into the clutches of the gargoyles, who are led by a princess stoically played by Miranda Otto. When one of the winged creatures is vanquished, it turns into a beam of light and ascends.

Then he meets up with the head of the demons, who’s directing two human scientists to hurry up and figure out how to bring corpses back to life. Bill Nighy plays the top demon with great dollops of evil countenance. When a demon is vanquished, it goes up in flames.

Everybody gets the point.

The fight scenes are epic, and Adam establishes as much of a connection as a man-made monster can muster for the good-hearted woman scientist, played with great angst by Yvonne Strahovski. (When Strahovski was the girlfriend of spy “Chuck” on TV, her Sarah Walker was as American as they come. But she’s actually a native of Australia, and that accent comes out here in scientist Terra. It was a bit jarring, actually.)

When the winners separate themselves from the losers, there’s no real reason to cheer. Who wants to live in a world this dark, anyway? I won’t lose any sleep over it.

For more News and Reviews like this  FILM REVIEW: ‘I Frankenstein,’ simply, good vs. evil, CLICK HERE

OPENING FILMS: A Frankenstein for today and a Hindi pay-it-forward
OPENING IN FILM: ‘Labor Day’ drama, ‘Awkward’ comedy
To Top