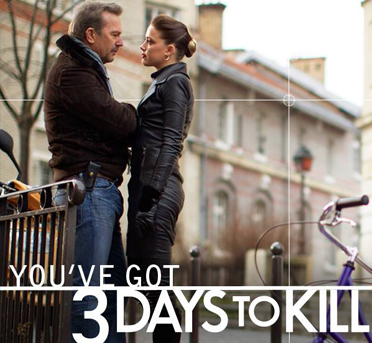 Kevin Coster shoots things up pretty good right from the start as CIA agent Ethan Renner in “3 Days to Kill.”

Much action is squeezed into the movie directed by McG from a screenplay by Adi Hasak and Luc Besson.

But just as quickly it becomes evident that “3 Days to Kill” is really two movies in one.

After he discovers that he’s terminally ill, former agent Renner ends up in Paris, in at attempt to make up for lost time with his daughter Zoe, a teen played with smarts by Hailee Steinfeld. In the process, he also tries to make amends with his wife, played with reluctant admiration by Connie Nielsen.

He promises Christine Renner that he’s out of the CIA game for good.

Of course, sexy agent Vivi Delay, played with chameleon-like cool and sizzle by Amber Heard, has other ideas. She promises that one more big play for the agency will be paid off with the delivery of an experimental medication that should buy him more time with his family.

Agent Renner can’t help but bite, of course, and goes on his way plotting and chasing and shooting.

He tries hard to keep the two lives separate, but intersect they must. It becomes a humorous and repeating punchline when the ringtone Zoey programmed into his cell keeps booming at inopportune times of the big chase, and how Viv’s names keeps popping onto the same phone when he’s trying to be a family guy.

Paris plays a pretty role in both halves of the picture, the city of lights stretching out behind him in all of its beauty.

The family story is more interesting than the agency story, by far, as dad attempts to regain the respect and love of his team daughter, at the age where she’s worrying about her boyfriend asking her to the prom.

It’s obvious the world where Renner would rather end up.

Alas, without tying up the caper, there is no coming home.

For more film news & reviews like ‘FILM REVIEW: Costner would rather be a family man in ‘3 Days to Kill” – CLICK HERE

OPENING FILM: Go back to Rome, stay up with the Agency
OPENING IN FILM: A fight to save a plane and the tale of Jesus of Nazareth
To Top