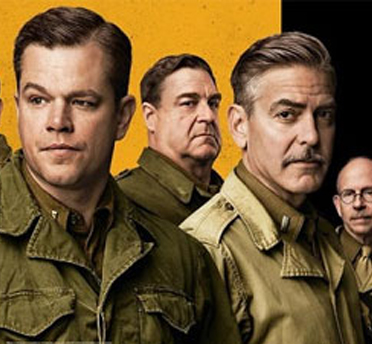 In ‘The Monuments Men, a starry ensemble puts art’s worth to mankind first.

George Clooney and his cast in “The Monuments Men” treated this true tale of how a small, passionate group of art lovers donned uniforms and firearms to trade wits and grit with Nazi soldiers to save the great art of  history with a whole lot of love.

Clooney wrote the script for the World War II drama along with Greg Heslov. Clooney directed. And as Frank Stokes, he plays a man of great determination who’s able to convince U.S. politicians to allow the mission and then assemble like-minded allies to face the dangers around every bend in Europe in 1944 and 45.

The stars shine as big-name actors Matt Damon, John Goodman and Bill Murray pump intelligence and passion into these middle-aged curators and architects who take on the responsibility and mountains of obstacles between them and the great art stolen from museums, churches and Jewish private collectors throughout Europe.

They also meld perfectly with Jean Dujardin, Bob Balaban, Hugh Bonneville, Dimitri Leonidis and Cate Blanchett to make this an intriguing ensemble study into how good people can learn how to lean on each other, trust each other, and bleed for each other literally and figuratively, all for a single purpose.

Taken from the book by co-authors Robert M. Edsel and Bret Witter, the plot shows how deep and wide was Hitler’s hateful doctrine to horde the world’s treasures and rule life in every way.

Stokes and his men believe they are fighting to save culture as its been created and savored for centuries.

Enemies pop up everywhere, from Allied commanders who deem the Monuments Men’s mission a folly compared to the cost of human life, to the Russians who think any art they recover should belong to them in reparation for all the lives they lost in the war, to Hitler’s decree that any art should be destroyed upon his death so nobody else could appreciate it ever again.

Yes, the U.S. and its allies prevailed. Clooney did not rewrite history. But he sure knew how to keep everybody on edge throughout the film, and earned a heartfelt round of applause in the theater at the end.