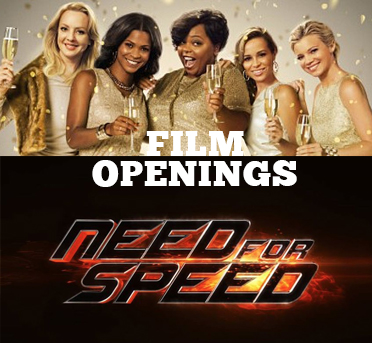 ‘Need for Speed’ barrels toward redemption; ‘The Single Moms Club’ aims for collaboration

In trailer world, the antics in “Need for Speed” include the moment when a fast car driven to the edge of a cliff is snagged by a helicopter.

The only thing left dangling is the car on a line.

Directed by Scott Waugh and written by George Gatins, the action drama features a man out for revenge. Tobey Marshall, payed by Aaron Paul, wants to even the score with a businessman who got him behind bars.

Dino Brewster, played by Dominic Cooper, will do pretty much anything to keep his adversary away from his goals.

Julia Maddon, played by Imogene Poots, is signed on to help Tobey get his due.

Throw in a wily mechanic played with some snarl by veteran Michael Keaton and car chase scenes that will keep the blood racing, and there appear to be enough twists in the road to make things interesting.

Also opening this weekend is “The Single Moms Club,” a comedy from the pen and direction of Tyler Perry.

The focus is on a group of, yup, single mothers, who come together after an incident at the school where their children go.

The trailer displays bonding amid life’s universal themes for the women played by Nia Long, Wendi McLendon-Covey and Amy Smart.

Terry Crews and Perry himself are among the men they must contend with in life.

The two opening movies last weekend ruled in ticket sales, according to boxofficemojo.com.

The Greek history epic beat out a time travel film of another stripe.