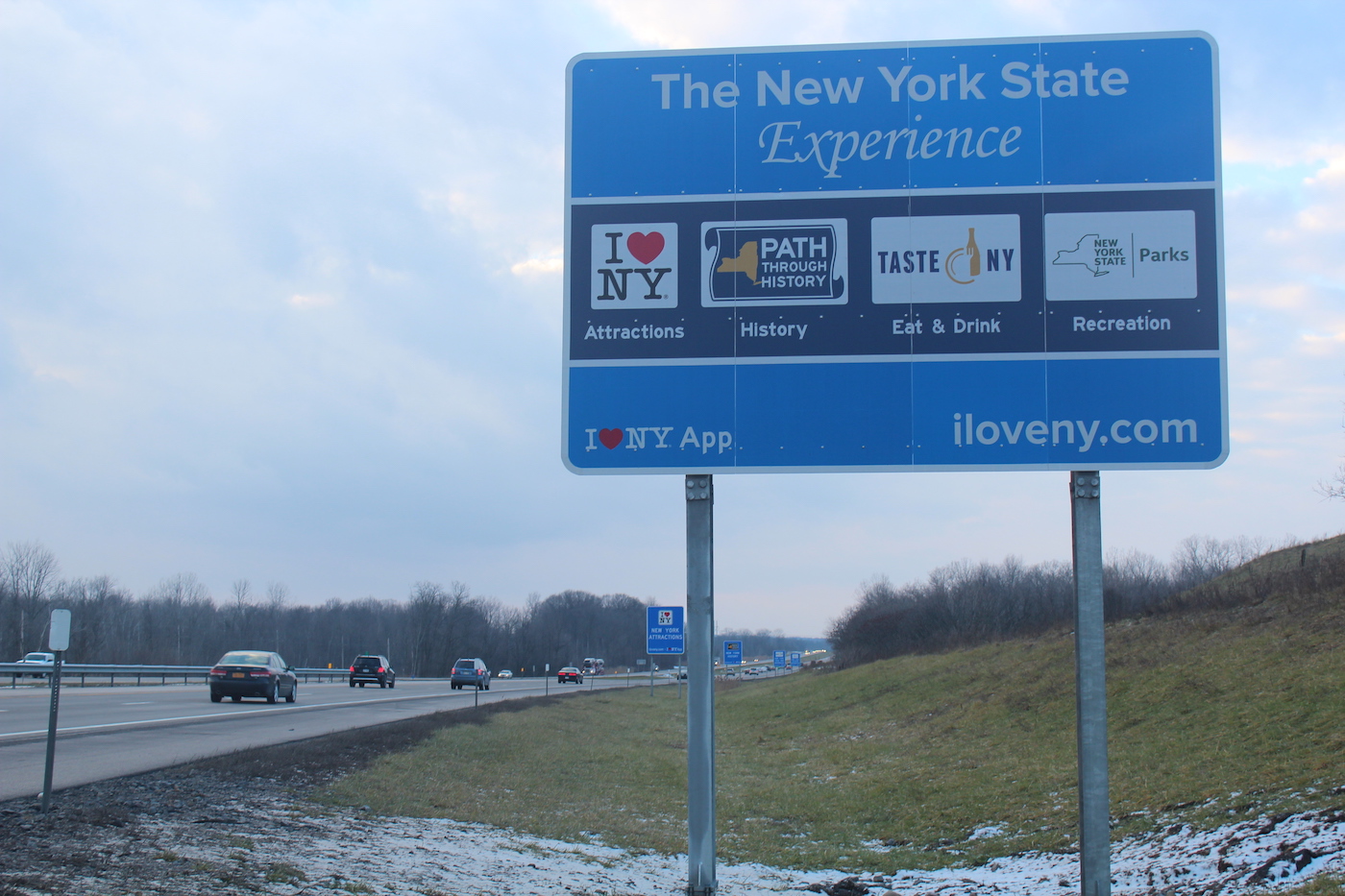 If you’re a regular driver of the New York State Thruway, you’ve probably noticed a whole bunch of those new blue signs, brightly touting the state’s many attractions under the infamous catchphrase and logo “I Love NY.” As it turns out, the federal government isn’t exactly sharing the love.

Officials say the signs don’t comply with federal rules because they are too big and contain too much information, which can lead to distracted driving and cause accidents. The state Department of Transportation and Gov. Andrew Cuomo have long defended the signs in a quarrel that goes back three years.

National Highway Administrator Gregory Nadeau met recently in Washington, D.C., with state DOT Commissioner and former Syracuse Mayor Matt Driscoll to come up with a solution, although neither side seemed eager to compromise. The state claims it didn’t commit any wrongdoing and says the signs are helpful and beneficial. Meanwhile, the feds may threaten to cut nearly $1 billion in federal highway funding from New York if the signs don’t take their own exit.

Obviously, the state cannot afford to lose funding. But let’s be frank here. New York state is not only a tourism hot spot overall, but tourism is the lifeblood of the upstate economy.

Last year, the industry generated $102 billion in revenue for the state. And different regions have their own tourism trademarks, whether it be camping and snowmobiling in the Adirondacks or winery touring in the Finger Lakes. And attention-grabbing signs on roads that cut through the state from the shore of Lake Erie to the Long Island Sound are going to be valuable in promoting what each region has to offer.

Usually once a month, I drive a 100-mile stretch of the Thruway between Syracuse and Amsterdam and see a number of the blue signs along the way, most notably the one for the Lock E-13 Living History Rest Area by Canajoharie, which opened in July. The site is one of the state’s “Path Through History” exhibits, this one featuring the important history of the Mohawk Valley and how the Erie Canal transformed the state forever. The area also has a “Taste NY” store, which sells food and beverages crafted by state companies and residents. Similarly, there is the Old Erie Canal Heritage Park in Port Byron, which was completed last fall that can be accessed from the Thruway.

The signs offer an incentive to both out-of-state drivers and lifelong residents to explore upstate New York’s many treasures. Many small communities have suffered from economic distress for some time and rely heavily on visitors coming to spend their money. The signs provide the catalyst for that to happen.

Ever since visiting western states years ago where signs providing directions to campgrounds and attractions were severely lacking, I’ve come to appreciate the plentiful ones that are scattered along roadsides across the state courtesy of my tax dollars. To have them taken down would not only damage inroads to helping the state’s economy, but it would completely waste the $1.76 million of taxpayer money it took to manufacture and put up the more than 500 signs.

Seeing how a good portion of the signs were actually made in Arkansas, which is another discussion in itself, taking the signs away is not something the citizens of this state deserve. That just makes it more imperative that Albany and Washington come to a sound resolution that involves keeping them up in some fashion.

But the state was told back in 2013 that the signs were illegal, and, according to documents obtained under the U.S. Freedom of Information Act, brushed off a formal proposal from the federal government to work together on creating promotional signs that were both informative and compliant with the law. The New York Times likened the state’s decision to go ahead with the project anyway to “a recalcitrant teenager.” And sometimes, teenagers need a stern talking to.

It is my hope that the signs remain standing and do so within federal limitations. It is also my hope that in an age where cell phones and GPS devices are regular passengers in the car, the federal government puts up as big a fight about distracted driving because of those devices as it does about signs with Milton Glaser’s famous I Love NY logo on them.

Signs say a lot. And what these Thruway signs tell us is: With its population decreasing and fiscal stress prolific, both residents and tourists can be reassured that the upstate region is worth stopping in and staying in once in a while, not just a place for passing through.

Mahoney Musings On The New Year
Krish Mohan: Not Yet a Household Name
To Top