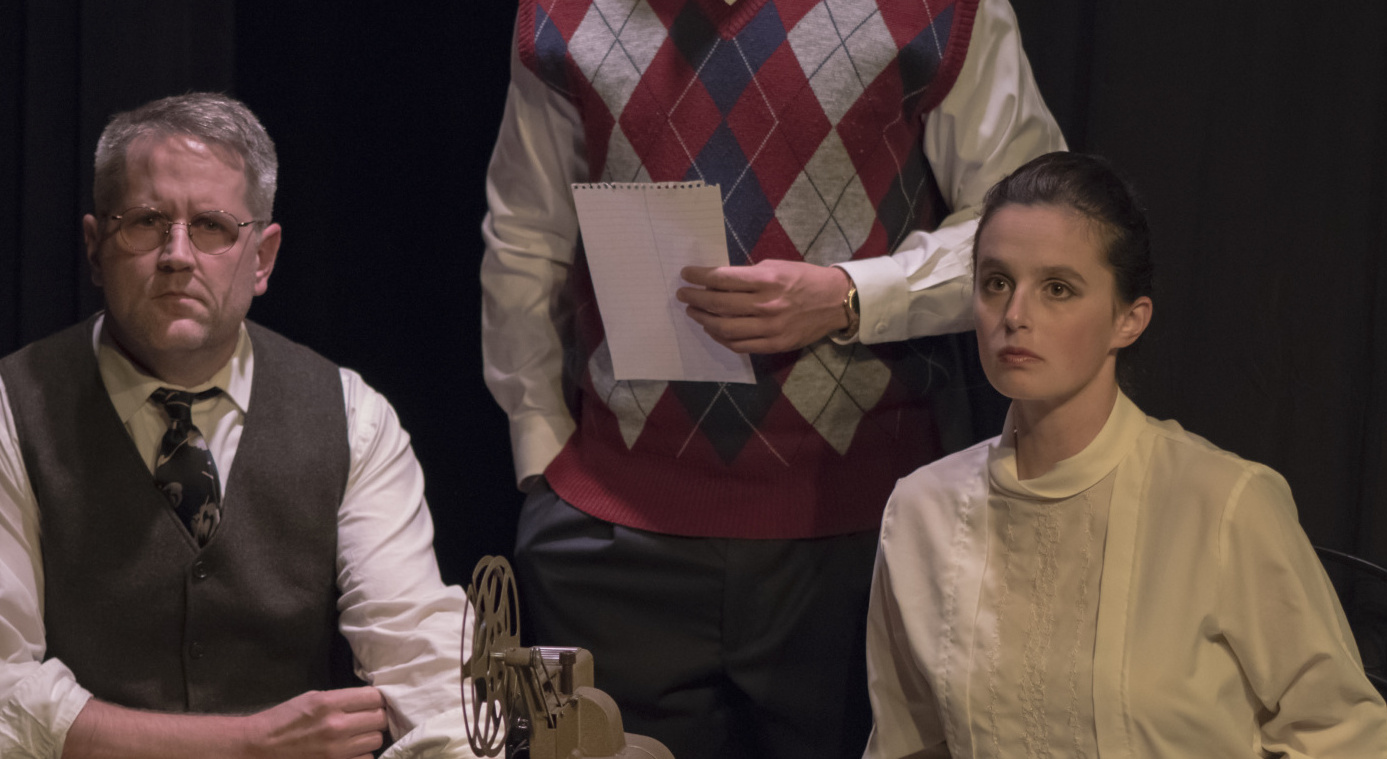 Farragut North and Frame 312. Just in time for election week, Rarely Done Productions brings us two plays from director CJ Young on political issues in tandem under the heading “Red, White & Rep” at Jazz Central. Politics and conspiracy theories are the subjects we don’t want to discuss at Thanksgiving dinner, but onstage they involve us and throw off sparks.

Farragut North (through Nov. 17), about chicanery on the campaign trail, and Frame 312 (through Nov. 18), which concerns the aftermath of President John F. Kennedy’s assassination, are not tightly complementary. And only two players in supporting roles appear in both. Still, each work is illuminated by seeing them side-by-side with the other.

Beau Willimon’s Farragut North, a modest hit in 2008, led to Willimon’s being hired to write most of the Netflix series House of Cards, based on the BBC series. Themes of intrigue and betrayal loom large here, delivered in lacerating language. There are passages in the first act that sound like spinoffs from Glengarry Glen Ross, but Willimon is less profane and more charitable.

We are with campaign operatives for an unseen candidate during the snowy Iowa caucuses of 2008. Willimon had actually worked for Gov. Howard Dean four years earlier. In the 2011 film version, The Ides of March, George Clooney had the role of the candidate written in so that he might play it himself. Here the dominating figure is tough-talking campaign manager Paul Zara, authoritatively played by Jordan Glaski. He’s assured that their man is ahead and that the whole team will sail to victory.

Playing up to Paul is 25-year-old whiz kid Stephen, who is looking beyond the election. In this role impressive newcomer Isaac Betters does most of the dramatic heavy lifting. Stephen is already married and divorced and prone to temptation, including pliable 19-year-old intern Molly (Liz Russell). He advises her, “You shouldn’t like me. I’m not a very good person.”

The greater snare is taking a meeting with the rival candidate’s battle-weary campaign manager Tom Duffy (David Minikhiem in top form). His analysis of the campaign deconstructs what Paul has been saying, and he has an enticing offer to make.

Although everyone tells Stephen how smart he is, and he believes it, events prove him to be catastrophically naïve. The larger question of the play is whether any idealism can survive in a contest choked with vanity and ambition. This leads to the moving scene in which a hard-pressed waiter (Elijah Betters) tells of his family’s many woes, making him exactly the kind of innocent victim the campaign pretends to want to help. Where is compassion?

The title of Keith Reddin’s Frame 312, which opened in 2005, will be immediately familiar to Kennedy assassination buffs. Abraham Zapruder shot 486 frames of footage on 8mm Kodachrome from an ideal vantage point that fateful November day in Dallas. It is in frame 312 that we can see JFK’s skull coming apart. Too gory for TV or the print media of 1963, but vital to questions of how many shooters there were. This much is agreed upon but the rest of that narrative has filled volumes and provokes heated debate.

Zapruder says he made three copies and gave two immediately to the Secret Service. CBS Broadcasting lost a bidding war for it to then powerful Life magazine, but Zapruder claimed to retain possession. To inflame matters, CBS producer Don Hewitt claims to have told correspondent Dan Rather, who had earlier reported inaccurately on the film, to take it from Zapruder by force for copying and then give it back to him. And then he immediately retracted that order. Rather, a bete noir to both the political right and conspiracy theorists, disputes all of this.

Zapruder, who claimed to retain his original, refused to allow frame 312 (in some accounts frame 313) to be reproduced. His family accepted the $16 million U.S. government offer for it in 1999.

Reddin’s play is premised on the contention that Life actually kept the film in a small box the size of a deck of cards. A Life editor dying of cancer, Graham (Robert Miller), heedlessly decided to hand the package over to an attractive young secretary, Lynette (Lauren Puente), just being promoted to editor. This transaction is relayed in flashback; 30 years later, Lynette (Betsy York) is deciding what to do with such a volatile treasure.

At this moment, the elder Lynette’s moral choices link to the scene of Stephen with the waiter in Farragut North: How can a person care enough to do the right thing? SNT