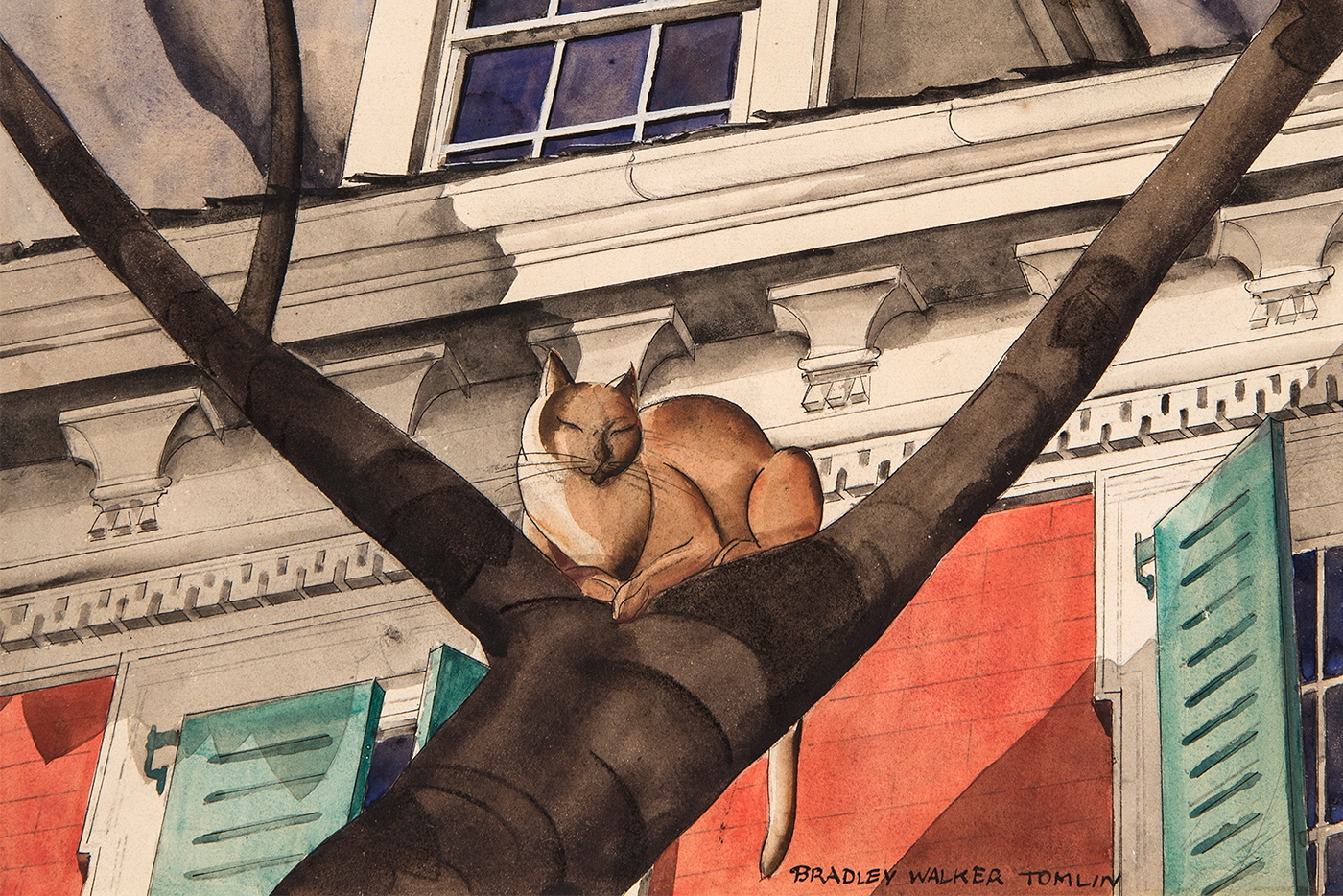 The Everson Museum of Art’s current show Bradley Walker Tomlin: A Retrospective tells the story of an artist who grew up in Syracuse, worked as an illustrator in New York City and eventually became part of the abstract expressionist movement.

A combination of Tomlin’s death from a heart attack in 1952 and lukewarm appraisals by a few influential critics led to relative obscurity for the artist. The exhibition takes an in-depth look at his career, and is accompanied by two shows selected from the Everson’s collection that explore the notion of abstraction. The retrospective presents works Tomlin created early on: landscapes, still-life paintings, pieces with an Art Deco flavor. For a time, he did magazine covers for Vogue, House & Garden and other publications.

Then he turned away from figuration and toward a style influenced by cubism and surrealism. This wasn’t just a period of transition, however. Tomlin created top-flight work like “Burial,” an oil finished in the midst of World War II. Its dark colors and closed-off spaces offer an elegy for the war dead.

There are other noteworthy pieces like “Still Life (Outward Preoccupation).” It combines flowers, cats, a series of rectangles, and a whimsical self-portrait depicting Tomlin as a Roman figure.

In the 1940s, Tomlin participated in an art scene encompassing individuals such as Jackson Pollock, Robert Motherwell and Phillip Guston, all major figures in abstract expressionism. Although Clement Greenberg, a prominent critic, stated that Tomlin merely joined this movement, the Everson exhibit features works showing how the artist experimented, as he moved forward with his own creative energy.

The exhibition displays “Abstraction,” an oil on Masonite with blue, white and orange colors, intersecting marks and a crowded canvas. It also includes “Number 1,” a 1952 oil whose white, gray and pink colors suggest a tree in bloom. And it documents Tomlin’s interest in calligraphy by showing “Tension by Moonlight,” which sets white stripes against a black background.

These, and other artworks like “Interplanetary Greeting,” demonstrate that Tomlin wasn’t simply a follower. He made changes, and moved in new directions. He clearly wasn’t an imitator.

The exhibition can’t determine how Tomlin would have further developed as an artist if he hadn’t died at age 53. It does, however, present work from every stage of his career and traces his evolution as an artist. The pieces make a solid case for reconsidering his reputation today. This substantial body of work demonstrates that he’s far from a bit player. This show is paired with two other exhibits. Salt City Abstraction presents an array of works by artists with a local connection. They range from Juan Cruz’s “Mancas,” with explosive red and orange colors,” to Susan Roth’s “My Anxious Heart,” in which she assembles canvas on canvas.

Other pieces include Rodger Mack’s small bronze; Margie Hughto’s stoneware, “Realm of the Muses II”; and Tash Taskale’s tall, steel sculpture, “The Wishing Tree,” which can be seen as a multi-story building or a tower emblematic of social isolation.

The artists’ roster for a second show, More Real, More a Dream, encompasses not only luminaries such as Pollock, Motherwell and Lee Krasner but also lesser-known yet talented artists. There’s a lithograph by Sam Francis, who was influenced by Eastern art, abstract expressionism and Color Field painting. Sooja Chun’s “Full Tranquillo,” done with ink on rice paper on Masonite, features black dots on a white background. Finally, “Article 85-1,” by Kazuo Takigami, seems to defy gravity. Viewers will wonder why the stack of porcelains doesn’t collapse.

Bradley Walker Tomlin: A Retrospective is on display through May 14 at the Everson Museum, 401 Harrison St. On Thursday, March 30, 6:30 p.m., the show’s curator, Daniel Belasco, will discuss the exhibit. Belasco is affiliated with the Samuel Dorsky Museum of Art at SUNY New Paltz, which organized the exhibition.