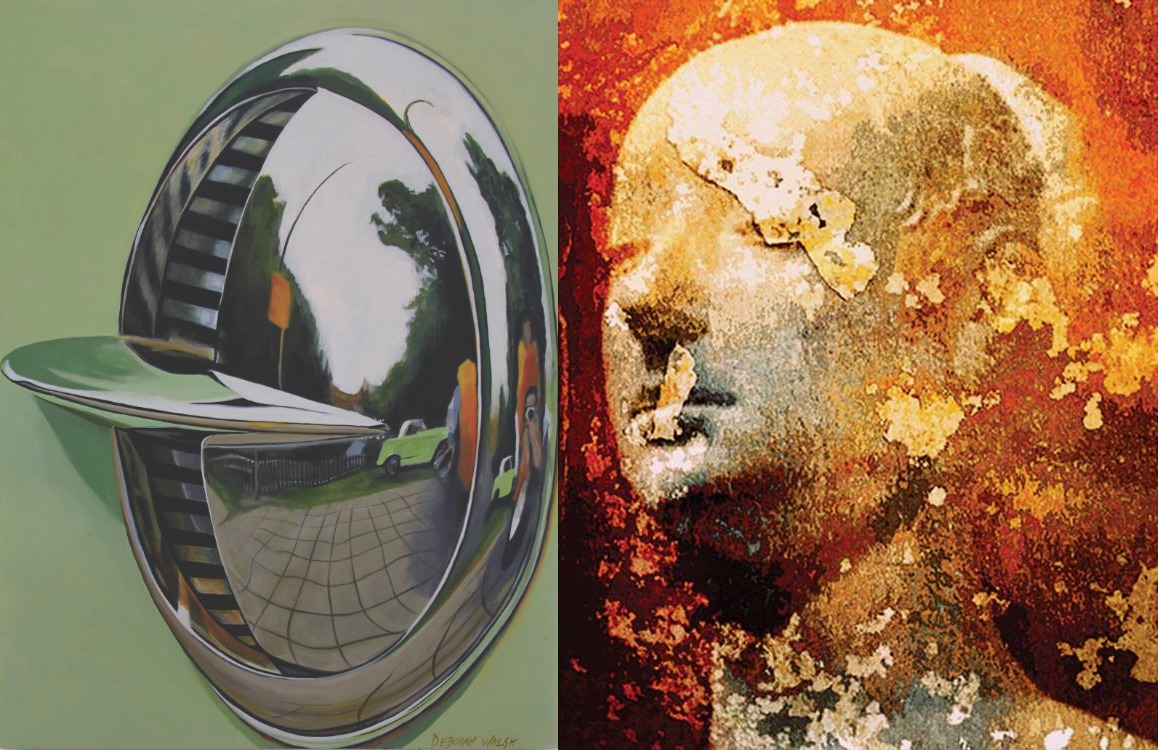 The Everson Museum of Art’s current show begins with a roster of local artists and then heads in several directions. Indeed, the works in Re (Generation): Women Artists After 60 range from pastels to acrylics and watercolors, from ceramics to a fiber work and a digital piece. And the artists portray a bevy of subjects: wildfires, the old Central Technical High School, guns and a goddess of mercy.

Along the way, the lush colors of “Stop for Autumn,” an oil by Linda Cohen, contrast with Mimi George’s “Before the Night,” a tight, sparse acrylic on board that creates a mood instead of emphasizing a beach or body of water. In addition, “Abandoned,” by Joan Applebaum, influences a viewer’s eye to move from a vehicle left for junk to bushes and the branches of a nearby tree.

Sculptural works include “No Fear,” a ceramic by Sookie Kayne, and Carol Adamec’s “Champagne Bubbles,” made from wielded and stainless steel, brass and copper. The latter artwork extends vertically, with a stack of metal objects. Like many of Adamec’s works, it creates an illusion of movement.

There are several artworks not easily categorized. “Unguilded Truth,” a digital work by Rosemary Krupka, depicts a male persona seemingly in inner space. Pamela Vogan Lynch’s watercolor goes big and bold with its large-scale portrayal of owl eyes. And Carol Boyer’s “Wildlife,” with tiny images of trees and folds suggesting hillsides, both stands on its own as a fiber work and evokes events of autumn 2018. Some viewers will look at the piece and recall the fires that burned down many buildings in Paradise, California.

Joyce Day Homan returns to a subject she’s explored in other works: gun violence. In her acrylic, “Dreaming,” a male figure is surrounded by firearms. The piece has an absurdist flavor but also is topical, as it delves into guns as a cultural entity.

“Persistence of Anguish: Lost in Combat” by Irene Layow stretches over two canvasses and is one of the best works in the exhibition. In the top canvas, there’s a faded tower and a red-and-orange profile that has no specific identity. Perhaps this refers to a fragmenting of humanity. In the bottom canvas, Layow has positioned bullet shells and ribbons constructed from fused glass.

And the exhibit has other noteworthy pieces. In Eleanor Price McLess’ mixed-media work, more than a dozen ties are draped across a canvas. Deborah Walsh often depicts cars or motorcycles, playing with reflective surfaces. For her acrylic “Hindsight,” she works with a car and rear-view mirror; a reflection of pedestrians walking nearby appears in the mirror.

Re (Generation), presented through the museum’s Community Exhibitions program, nicely accommodates diverse styles while also making connections between some of the pieces. Beyond that, it celebrates the creative vision of its participants. In the group-show format, each artist has only one piece on display. Yet the exhibition is energetic rather than segmented, incisive, not loose.