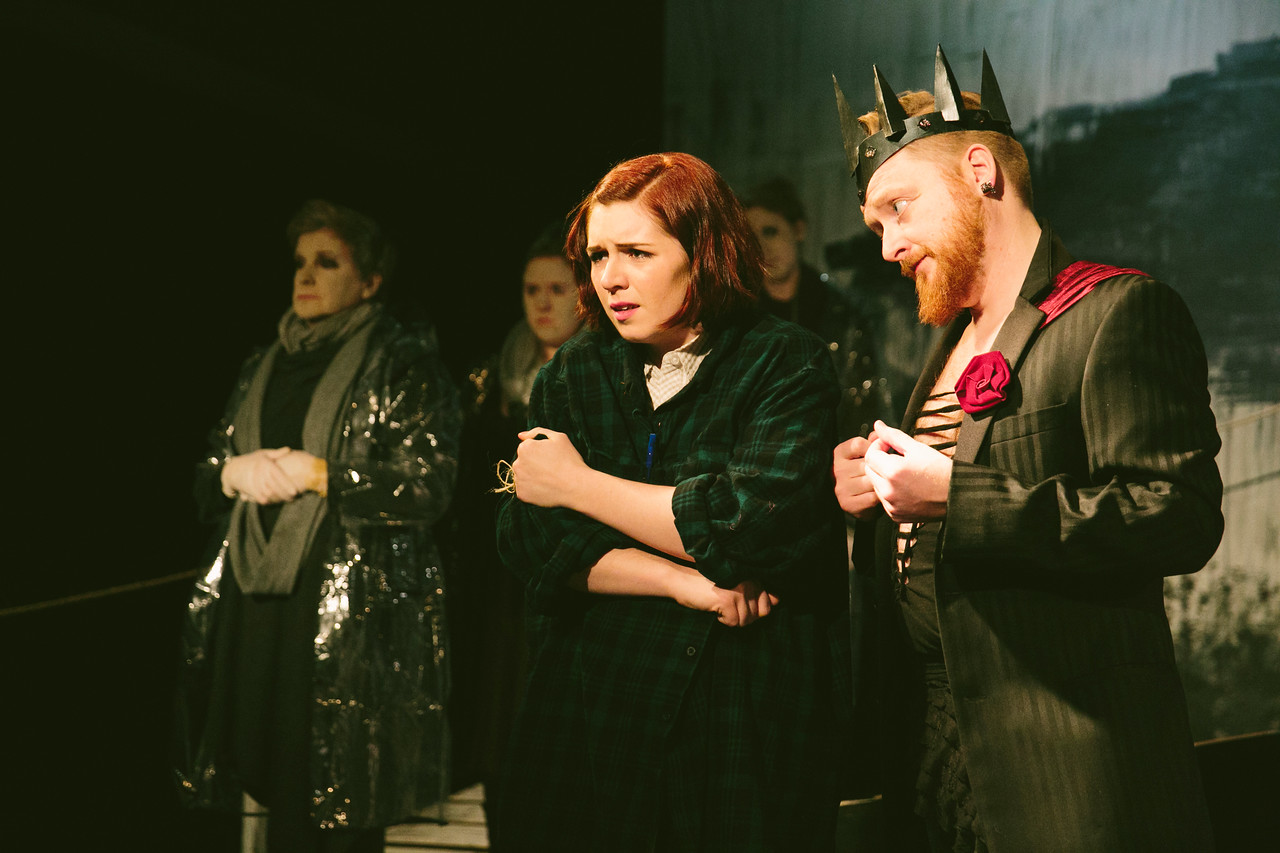 Her name usually comes second, Orpheus and Eurydice, like Romeo and Juliet. In Sarah Ruhl’s quirky and surprising 2003 dramatic retelling of the ancient story, Eurydice, she’s the dominant character and Orpheus, while charming, is now a supporting player. Central New York Playhouse’s production of Eurydice runs through Saturday, Feb. 18.

In the original myth Orpheus might look like a human, but he’s a divine figure who rescues his lover from the Underworld, with the proviso that he can never look at her. Well, he does, and zap, she’s a goner. This time around she’s the mistress of her own fate.

At first glance Eurydice appears to resemble Anne-Marie Macdonald’s Good Night Desdemona, Good Morning Juliet, widely performed about 20 years ago. In that play the Shakespearean heroines are turned into women of action, but the playwright’s intentions were polemical and satirical. Much of the play was for laughs.

Pulitzer and MacArthur “genius” grant winner Ruhl, still America’s hottest young playwright, has more serious intentions with Eurydice. After all, the story is a matter of life and death.

All action is set in the present, and characters speak colloquial American English. There are, however, classical motifs. Both Eurydice (Alyssa Ashley Otoski-Keim) and Orpheus (Derek Powell), portrayed as a diffident suitor, sport the kind of sandals that the ancients wore in the movies. A musician, as in the myth, Orpheus is searching for a tune lost in his memory. They are, however, about to be married.

Simultaneously, we learn that Eurydice’s father far below in the Underworld has retained a consciousness and vocabulary. He would like to speak to his daughter, perhaps through a letter. Although the Orpheus story survives in a number of variants, not one includes a mention of Eurydice’s father.

In a candid program note, director Elizabeth Allers acknowledges that playwright Ruhl’s father had died before she started the play, and she was grieving him while she was writing. She dedicated Eurydice to him, just as director Allers dedicates this production to her father.

As the wedding is taking place, Eurydice steps out to take a drink of water, and she encounters an ingratiating stranger (Jeremiah Thompson) who says he has a letter from her father. At first it appears that he merely wants to take sexual advantage of her, from which she flees, but worse follows. She takes a fatal fall and descends to the Underworld in an elevator with a shower behind the sliding doors.

Upon arrival she meets her soft-spoken father (Robert G. Searle), who tries to get her to remember the sense of self washed away by Lethe, the River of Forgetfulness. Dissuading him is a kind of female chorus known as the Three Stones, including Big (Kathy Egloff), Loud (Christa Wirth) and Little (Emilie Pitts).

Don’t look for ancient antecedents in, for example, the Eumenides or the Furies; the Stones appear to be Ruhl’s inventions. Their intentions line up with totalitarian states, not only obliterating language but also privacy. The father responds, defiantly, by constructing a room for Eurydice demarcated with lines of string falling from an umbrella.

The stranger reappears, and his pretense is gone. Ruler of the Underworld, Hades, he now morphs into a demonic child, zipping by on his scooter, with the same foul intentions.

In the land of the living, Orpheus yearns for his almost bride, tries to send her letters, and lowers a book, The Complete Works of Shakespeare, on a fishing pole whose line goes to the Underworld. Father reads from it.

How to resolve this is Eurydice’s choice: whether to answer Hades’ increasingly powerful invitations, to answer Orpheus’ call to her, or to lie down with her still father.

Allers, who holds degrees from both Le Moyne College and Syracuse University, also tells us this is her first directing stint, just as lead player Alyssa Ashley Otoski-Keim is making her local debut. Not to worry. The cleverness of Christopher Lupia’s set design and Christine Huffaker’s costumes contribute much to the show’s appeal. Each character stands with a distinctive body set, especially the Stones trio, and walks with an individualizing gait.

Frantic Frayn Farce at the Fair
Sammys Gets Its Moe.-Joe Working
To Top