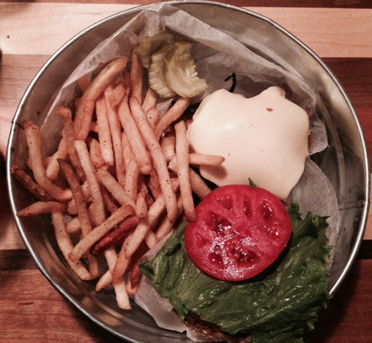 A visit to The Pale & Bucket Pub

May I re-introduce your next new favorite neighborhood bar:

Years ago, before the name changed to Nutzy’s Grill, the Westwood Tavern was a Syracuse staple in terms of a neighborhood pub. The atmosphere and the food was definitive for what the atmosphere boasted, and this included great burgers. Earlier this year, after arriving to Nutzy’s for a bite, a sign was noticed on the door that showed that the place had closed, and an article followed immediately after. Months later, the announcement was made via the thrice-weekly that the cordial and familiar-faced Kitty Hoynes bartender, Luke Naughton, would be opening a new establishment within those walls.

The innards of The Pale & Bucket are new and unlike that of its predecessors, gutted and revamped, but the casual and fun atmosphere has been maintained well; hence, this renovation successfully secures the venue as a reliable “neighborhood pub.” The dining area has been completely opened-up, and I noticed upon entering that booths line the entire right wall. High-top tables are spaced throughout. Along the left wall sits the bar and the back of the pub is the place where the food is ordered. Along the ceiling, televisions are perfectly spaced for everyone to enjoy whatever games are being played.

The two-sided menu reads well, and it didn’t overwhelm me with copious options to make steam come out of my ears. The ordering is simple, and the process is similar to that of Blarney Stone: walk up, order, watch for your name to be written on the digital white board. And then you eat. With the SU supporters and other sports fan patrons, the atmosphere also reminds me of another neighborhood pub: Kelley’s.

The only significant difference from Blarney and Kelley’s is that Pale &Bucket offers a Sunday brunch.

The sibling-filled group that I was with ordered General Tso wings to share, two Pork Bahn Mi sandwhiches (for the ladies), and two 44 Burgers (for the guys). The 44 Burger contains not only beef, but 44 percent of this mouth watering delight is comprised of bacon. And, yes, this burger is delicious enough to be the pub’s staple and join the rankings as a notorious Syracuse burger. One of us ordered a French Onion soup, and this super-salt-saturated dish was the only aspect we disliked.

Before we headed out, we rubbed our bellies with delight. A post-dinner nap was foreshadowed; although, the time was late in the evening. I headed to the bathroom before saying goodbye, and the experience was probably one of the best. Instead of a newspaper or television fashioned over the urinal, a framed poem caught my eyes. It’s not labeled, but I recognized the first stanza as quickly as I would recognize my car. And its author:

Relieving myself and reading “The Secret of My Endurance” for a first-time-ever combo was certainly a gratifying moment. The poem is definitely fitting for such a placement, and those familiar with Bukowski could agree. For certain, the author would be proud. But The Pale & Bucket doesn’t house the types of belligerent folk and those who are images of Bukowski; it’s not that kind of corner bar.

The restaurant does offer a family friendly aura – there is a kids’ menu as well – as much as it encourages friends to get together. (For those who disagree with me: People do take their children to Tully’s after all.) Tables can be pushed together for larger parties. The crowd does not get obnoxiously loud.

I can’t wait to go back, and I wish Luke the best of luck.

Once Upon a Time
The Great River Triangle UFOs
To Top