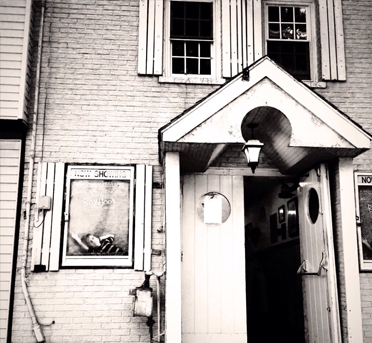 It’s technically a busy street, but East Seneca is quiet aside the murmuring tires rolling by and rumbling voices carried down from the Ironwood and other surrounding businesses. The birds chirping and pecking create more of a stir than anything else. The rustling of the trees: the effort by the wind coincides and buffers the settling down for the evening.

And it’s difficult (Oh, temptation, you!) to stroll past the wood fire pizza restaurant mentioned above without deciding to venture in, and this is after ignoring pleas of a curious stomach. However, that one tooth of yours (one that everyone has) chimes with an aria even before your eyes fully take notice of Mrs. Kelder’s Cakes. Confused, your mind tells you to raid the shop, purchasing pastries of all sizes.

Finally, your fabled walk past seats (not too rigid and not too soft) presenting you of delights that are too savory and too pleasantly sweet, you arrive at the third and final destination: Manlius Art Cinema.

The tarnished and weathered brick building is nothing short of charming. It has aged well, and the old aura is to be embraced rather than looked down upon. It clearly sits as any home or building does: like a face. The two windows with opposite-paned halves sit like eyes staring out at you. The weathered sills are natural crows feet. The shaded and weathered bricks in the front distinctly show laugh and worry lines. It’s a theater, after all; with all the history and films have been shown within its walls for almost 100 years, the edifice has to be affected.

And there is a bench in front and across from this theater that can be taken advantage of as you wait for others to arrive. Or you can just sit there with a coffee and book in hand, driving people’s curiosities mad with pondering. You can sit there, smiling at the venue. That bench would be the perfect place to kick a movie off or even create a short film.

(Anything can happen, by the way, as you sit there with your coffee next to you and Newtimes stretched open. Lovers walk hand-in-hand. People could trip. A clown could mope along, and its shoes could squeak with every step. A paper airplane could sail perfectly through the air. A dog walker with numerous and multiple breeds could get tangled up and dragged down the sidewalk.)

However, the movie eventually has to start, and so you have to eventually enter.

You pay up front for your ticket. You pay for snacks next. You walk through the threshold and into the theater to sit. It’s standard procedure, and it’s that simple. The greyish-walled and greyish-seated narrow theater that holds eight seats per row (a pair is separated from a series of six by the aisle). The incline is slight, and everywhere is a good seat. And before the movie begins, Mr. Tobin — as he had heard about a theater’s owner in Paris — gives a brief talk about the movie, upcoming movies, and other anecdotes to interest the patrons. It’s humble, classy, and genuine.

And this is it. The picture is about to start, and you’re briefly staring at a white screen in the belly of the dark. You, as many others have come, are about to be entertained. You’re about to experience and become invested in a tale that is so similar to many familiar stories, but it will be told from a different perspective and angle. You have come to see characters you love submerse themselves in their own lives, the good times and the bad times, through joy and suffering. (Laughing was to be written in place of joy, but one can laugh through suffering — it’s called madness.) There is possibility to relate and/or empathize, and there is sometimes possibility to compare and line up your own life with that of a character or more.

And for that brief white screen moment, you take yourself out of your life. As you are no longer sitting in that seat, you’re plastered and pinned in the dead center of the screen. You’re in one giant production already, and it’s capturing your very essence perfectly — your own life. It’s the moment where you realize you’re holding your breath; you release the gust and begin to breathe normally again. You can’t take yourself out of reality, but you can hide temporarily. This amusement presented on the screen helps level you. You close your eyes, open them, look to your side and smile.

Daughters of Depp, Smith get a chance to save the world
Midway Drive-In Makeover in Progress
To Top