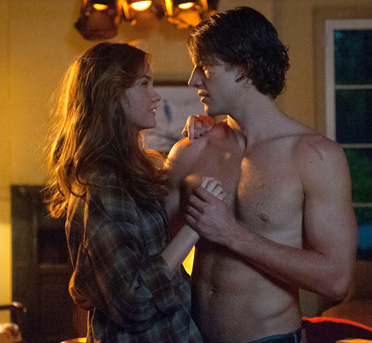 (Review) Amanda will always have Dawson’s heart, thanks to Nicholas Sparks

Yes, it was time for my first Nicholas Sparks-based movie, even though my dear wife Karen – who had thoroughly enjoyed filling me in about how much she loved The Notebook and exactly why and what I missed out on – decided to take a pass.

So I walked solo into the late Saturday afternoon crowd at Destiny USA to find my seat among the clustered groups of women. Middle-aged women, college-aged women, gray-haired women, some women who’d managed to convince the men in their lives to come along for the experience, but not too many of those. Maybe I only imagined the wondering stares at my status as I climbed up to my sole stadium seat toward the middle of the two-thirds filled upper level, but I wished at that very moment that I was carrying some sort of placard that read “Movie Critic On Duty.”

And then I settled in for the melodrama of The Best of Me, the ninth movie made from the novels that have come from the mind of Sparks, and this a full decade since The Notebook caught fire and captured the hearts and souls and tongues of every woman everywhere.

I saw a good-looking guy reading a book on an oil rig out on the water. James Marsden as Dawson is reading Stephen Hawking out under a gorgeous Louisiana sky when disaster strikes, and Dawson easily switches into hero mode, saving co-workers from certain death until an explosion propels him deep into the water.

In the depths, he pictures his one true love, 21 years past. When he awakens in the hospital, doc tells him how amazed everybody is he’s still alive.

That’s how the 117 minutes unfold on this romance written for the screen by J. Mills Goodloe and Will Fetters and directed by Michael Hoffman. The scenes down there Louisiana way are all gorgeous. The actions are all big and bold. The people are mostly beautiful. The sum story is as unbelievable as can be.

As soon as Dawson gets out of the hospital, he gets a call that his old friend Tuck has passed. Somebody else has gotten a similar call from Tuck’s attorney. Amanda, played by the gorgeous and bookend-matched-to-Marsden Michelle Monaghan, also shows up at the executor’s request, and, wait, she’s the woman from his underwater vision!

The 21-years-ago Dawson and Amanda are played by Luke Bracey and Liana Liberato, and although they are equally as stunning in looks as Marsden and Monaghan, here’s where the physical part of the story started to break down for this man. Liberato indeed can pass for a 20-year-younger version than Monaghan, a bit plumper of cheeks, but similar enough to make the frequent flashbacks work. But Bracey and Marsden look nothing at all like each other.

In fact, Bracey to me looks oh, five years younger than Marsden, even though the former is clean-shaven and the latter has gray in his beard stubble. Google now tells me that Marsden is 41 and Bracey is 25, but in the theater, every cut between time periods my brain screamed: Not him! Not him! Not him! Big bummer.

Back then, Dawson was a smart, socially challenged teen from the wrong side of the woods who suffered greatly from a sadistically evil and criminal father. Amanda was a socially mobile teen from a rich family who pretty much did whatever she wanted, which included winning over the handsome loner and helping him discover he’s good enough to be a college man.

Tuck, the wise town gent played with satisfying smart arch by Gerald McRaney, takes Dawson under his roof and his wing after father Tommy Cole, portrayed as the polar opposite with plenty of hateful traits and tics by Sean Bridges, finally goes that one step too far.

But of course the best laid plans the sweethearts have to run into are walls six feet thick and 100 feet high, 21 years ago, and during their reunion.

No, I had not read the novel, so each twist, I had to choose between gasping, laughing or grabbing for my manly bandana-as-handkerchief. Confession: Gasping, yes. Tittering awkwardly, yes. Reaching back there for the cloth tentatively, once.

DC Comics Hero to Hit the Big Screen
Even with John Wick poised to do well, Keanu Reeves ain’t what he used to be
To Top