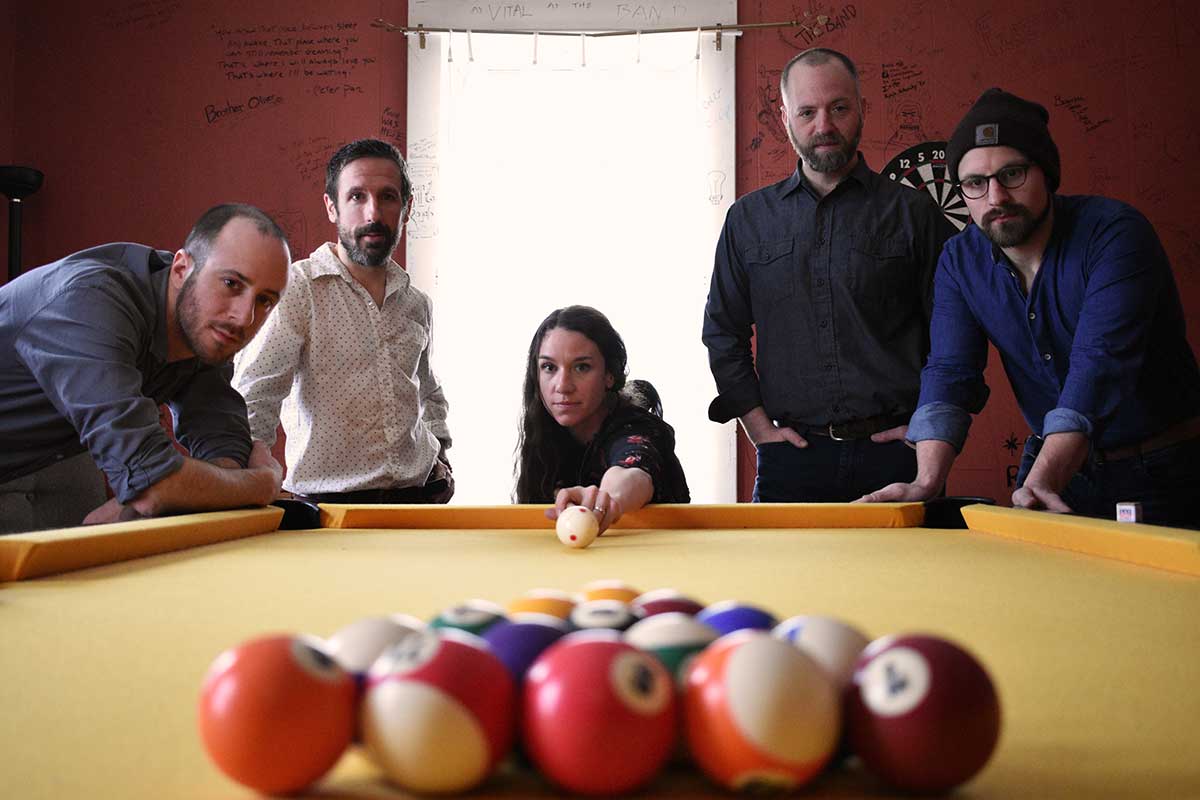 The Binghamton-based band Driftwood got its modest start playing shows at venues like Al’s Wine and Whiskey Lounge in Armory Square. Now the outfit is playing on stages in front of hundreds of fans. From Peach Fest to Grassroots, Driftwood has made big-time strides.

Driftwood celebrates the release of their fifth studio album, Tree of Shade, with a show on Sunday, June 23, 5 p.m., at Good Nature Farm Brewery, 1727 Route 12B, Hamilton. Tickets are $15. For information, visit driftwoodtheband.com.

The band features Dan Forsyth (guitar, vocals), Joe Kollar (banjo, vocals), Joey Arcuri (bass), Claire Byrne (fiddle, vocals) and Will Sigel (drums). Driftwood sounds like a throwback to the era of all-acoustic instruments and raw voices, but without sacrificing the modern spark and energy that’s made them so successful.

Past albums have been full of high-energy barroom stompers where Byrne sets her fiddle on fire and powerful harmonies push the songs to fever pitch. But Tree of Shade offers something different.

“This is a mellow, more vibey album,” Byrne notes. “When we got the list of songs that would be put on the album, I thought, ‘This is not bouncy, upbeat Driftwood.’ But we can’t keep doing the same thing. It was a really cool process and I’m really glad about the songs we chose. We learned a lot and got out of our comfort zone.”

The album is the result of working with Simone Felice, who produced The Lumineers’ Cleopatra. The same warm, ambient tone that defined The Lumineers now translates into Driftwood’s sound, gaining them new textures and emotions. Sound engineer Pete Hanlon, who has worked with O.A.R. and Rachael Yamagata, also lent his ear and talents to the project and the experience comes through in the final product.

Rather than choosing tracks, Driftwood members recorded individual demos and allowed Felice to choose the songs that fit best. The hands-off approach has resulted in an album the band might otherwise have never made. “He chose the vibe and the whole structure of the album,” Byrne explains.

The band also decided to include “What You Do to Me” and “Conquering Man,” two key additions that help old fans keep in touch with the roots of Driftwood. The final sum is absolutely greater than the parts.

“We thought ‘Conquering Man’ was more upbeat and felt really relevant for the time we are in, in our country,” Byrne says. “I don’t do a lot of political talk, but I initially started writing that song because there were a few events happening at the same time. I was pissed off being a female in the industry. There was a time the sound guy was an ass. I watched him give a strong handshake to all the guys and I got fingertips. It’s a feeling of being incompetent, unsure of myself, and being annoyed at guys for not feeling that way. So many guys don’t seem to struggle with the same thing. It’s really frustrating. It’s pre-Me Too movement, too. It’s before all of that. It’s hard to be a woman.”

The song touches on those themes and larger ones in a powerful way as Byrne sings, “I’m getting tired and it’s getting harder to breathe/ but we can blame it on the jealousy, wild fires, smoke in the air/ November doesn’t usually feel like this/ it’s about time/ that’s about right/ I’ve been a sinner all of my life. . . it’s the way you’re shaking my hand/ but you’re just a man/ a conquering man/ these are just words to write a song/ because you don’t ask me how I feel/ you don’t even look at me.”

“It’s great we can talk about it now,” she continues. “I feel like the Me Too movement did that. My mom just sent me an article about Imposter Syndrome. It’s a feeling that you don’t belong or deserve to be where you are, that you’re not good enough. I’ve battled with these things. I’m floored that a guy can come into something and not be good at all — but be so confident.”

Other songs deliver messages of love, movement and growing up in similarly powerful and yet subtle ways. “CalifornIA” is a brilliant and engaging opening track that starts with whispers of vocals that pull in the listener immediately. “Lay Like You Do” is comfortable and familiar, reminiscent of something Jason Isbell might pen. The title track seems to melt into a beautifully ambient song of soft tones. And “Hello” wraps the album with a track that feels like a tribute to The Band.

Overall, Tree of Shade is a natural and major progression for Driftwood. “I feel like if we picked the songs we picked, the songwriting and playing would have evolved because of time, but it wouldn’t have been a bolder statement like this is,” Byrne says. “This is clearly a step outside of the box. I’m glad about the tunes we came up with. I’m proud.”

Driftwood is also making moves to tour smarter as the group changes with marriages and children. “We’ve been on the road for seven years,” Byrne says. “It’s made us think a little more about our plan of action and how we’ll attack the road.” The group plans to release vinyl albums of Tree of Shade, with music videos on the horizon.

“We’re going to keep writing, recording, evolving as a band and playing shows,” she says. “It’s funny when you say it out loud, but that’s what we do.”