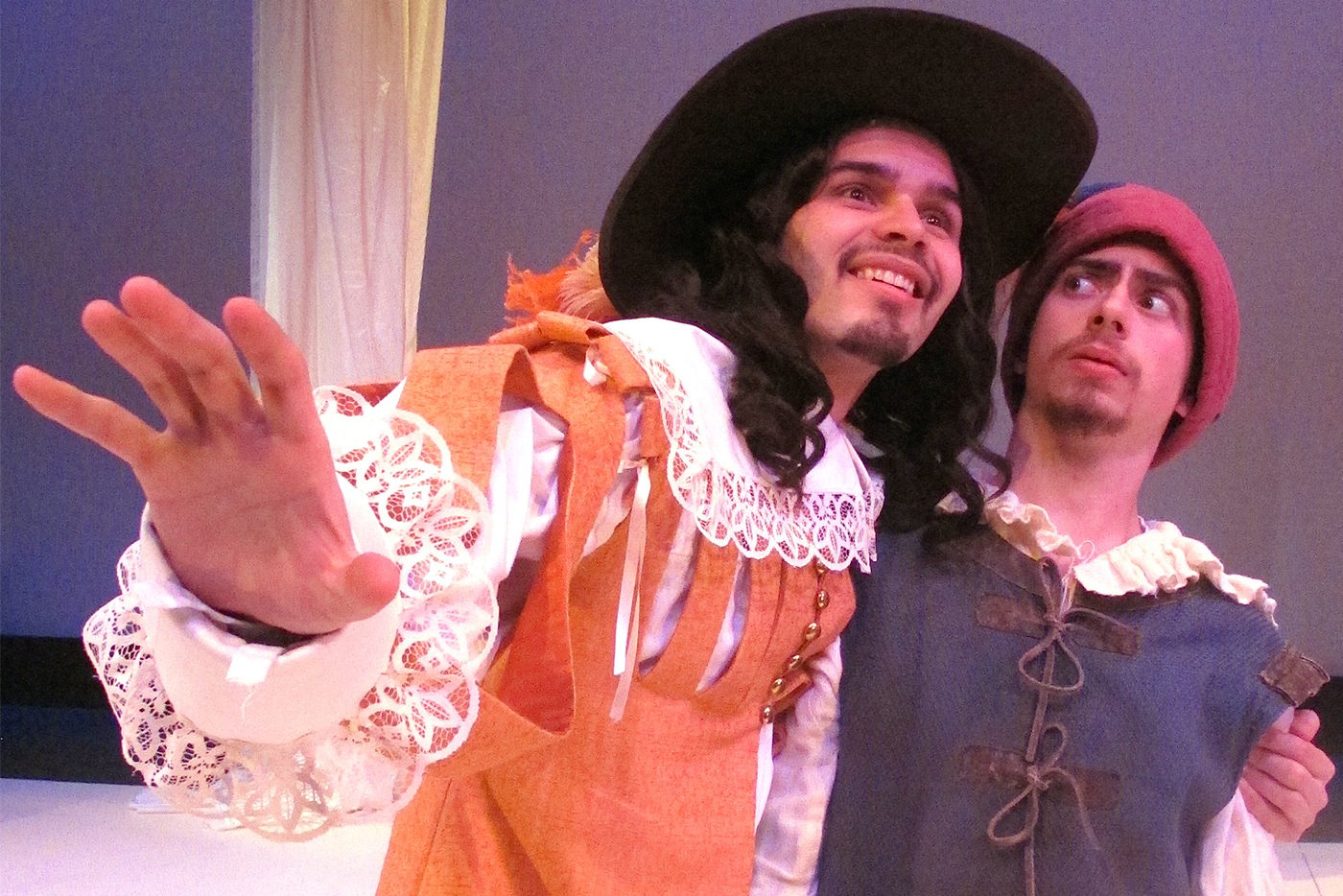 The strong wordplay of “The Liar” is on display at Le Moyne’s Coyne Theater.

You don’t need five slamming doors to have a French farce. Puncturing inflated egotism, vigorous wordplay, impudent servants and mistaken identity of characters are still such reliable devices that they can carry the evening. That’s the case with The Liar, performed by the Boot and Buskin Theatre Club at Le Moyne College’s Coyne Center.

Don’t feel left behind if you did not know that the august dramatist Pierre Corneille (1606-1684), the “Father of French Tragedy,” ever stooped to such a lowbrow form as farce. Well, he did, but until recently they were not often performed. But there has been rising interest in them on the printed page because of the author’s complex verbal humor. Top literary translators like Richard Wilbur and Ranjit Bolt have been calling attention to these works. And adapter David Ives, the Robin Williams of contemporary American playwrights, thinks this one should leap from the page to the stage.

Corneille’s Le Menteur appeared in 1644, but the faithfully translated title The Liar has been avoided until recently. This is possibly to avoid confusion with Carlo Goldoni’s frequently-performed comedy The Liar, written about a hundred years later. In both, male characters wear knee breeches and sometimes break through the fourth wall, but in Corneille the wigs are longer and there is more talk about sex.

Tall, dashing Doronte (Drew Gripe), the title character, has just returned from the wars against those foul Germans. Or so he says. On his first day back in Paris, he contracts with an inventive urchin named Cliton (scene-stealing Tom Vazquez), who wears a sign reading “Rent Me” around his neck. Familiar with the city, Cliton knows the way to the elegant Tuileries Gardens, where Doronte meets two smashing lovelies, Clarice (Noelle Killius) and Lucrece (Brittany Fayle). The two damsels don’t look too much like each other, as Lucrece is taller and has red hair. Audiences used to comedy from any century immediately recognize that the similarity of their names is an invitation to trouble. Even Doronte can’t keep them straight.

Independent of this meeting, Doronte’s lumbering old father Geronte (Orlando Ocampo) has prepared for his son’s homecoming by fixing him up with a lovely young girl named Clarice. Wrongly thinking that the girl with whom he was smitten with him at the Tuileries is Lucrece, Doronte commits his first lie on stage: It is that he is already married, so he will have nothing to do with his father’s fixups, even though she is indeed the one he has the jones for.

The real Clarice is actually engaged to Alcippe (Andy Hughes), a handsome dude who nonetheless walks into a pillar at his entrance. Alcippe is a childhood friend of Doronte, but proposes a duel over the favors of Clarice based on the father’s unfulfilled arrangement. When Doronte pleads, “Not her,” he’s telling an untruth, if not exactly a lie.

Corneille extends the theme of doubling to the lower social orders as well. The first servant of Clarice and Lucrece we meet is the pliable and sexually accommodating Isabelle (Kit Kuebler), whose attentions to Cliton distract him from attending to his employer. When she’s away, she is replaced by her almost look-alike twin Sabine (Kit Kuebler again), a scolding harpy with pursed lips. All the same, her meager charms work to great effect on Alcippe’s foppish sidekick, Philiste (Jace Biedekapp).

The Liar marks the return of longtime theater head Bill Morris, well remembered for bringing alive long-neglected classics. Along with the carefully choreographed blocking, assisted by fight manager Alec Barbour, Morris pays close attention to diction and projection in a play that many people are happy just to read. Not only is the dialogue in iambic pentameter, often with outrageous forced rhymes, but it is filled with allusiveness, such as, “Who is that imaginary invalid?”

Even though scenery designer Karel Blakely’s stage is nominally bare, this is a rich production with MGM-level costumes and music from Erik Satie through Count Basie. Ain’t that the truth?