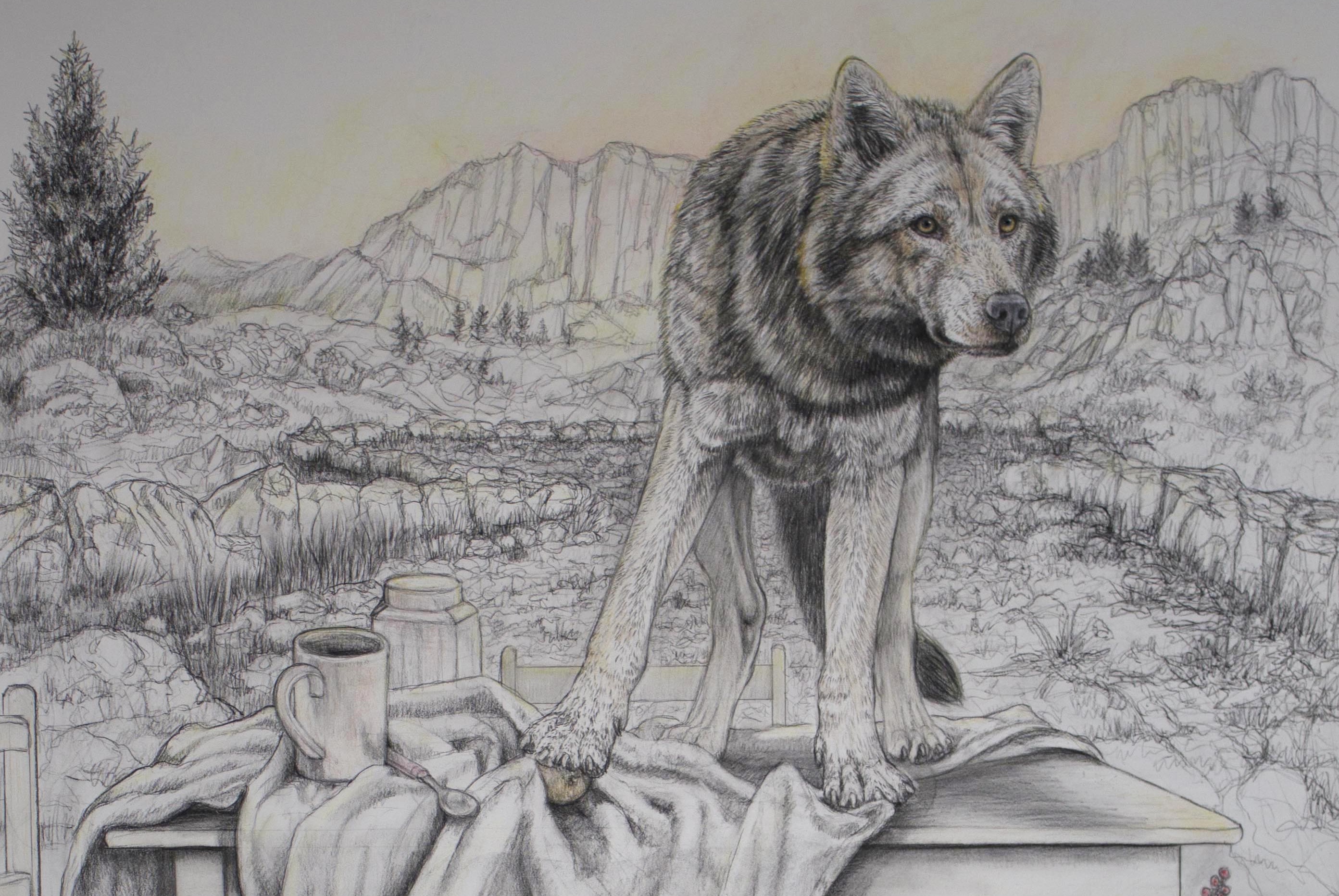 For many years, Donalee Peden Wesley’s mixed-media drawings have focused on relationships between humans and animals. We All Fall Down, her one-woman show at the ArtRage Gallery, further documents her view of connections that are problematic, troubled, even outright exploitative. The exhibit encompasses topics such as puppy mills, factory farming, medical research, and the ongoing extinction of various species.

The artist explores relations between animals and humans in a distinctive visual idiom, one that’s both topical and imaginative. For example, a drawing dealing with greyhound racing shows three dogs on top of each other pyramid-style. Similarly, a charcoal drawing referencing puppy mills portrays five dogs, each in an awkward, unnatural position. The artwork communicates by implication, as it asks viewers to consider the dogs’ status and possible alternatives to their current environment.

“Encroachment #1” depicts a wilderness scene, with a kitchen table holding a spoon, coffee cup and tablecloth. Other items, such as bowls and spices, lie on the floor. The work both presents a wolf in an unfamiliar setting and suggests that humans regularly intrude on animals’ habitat.

“Too Little, Too Late?” communicates a similar theme, concentrating on the erosion of polar bears’ territory in the Arctic Circle. The piece portrays three bears, three men, and sacks marked “Arctic Circle.”

Other works depict a bear on display at an amusement park and pigs crammed into small spaces in a factory-farm setup. There’s no imagery of the bear being disciplined or the pigs dealing with severe stress. Peden Wesley, in her work, has long avoided imagery that’s shocking or provocative. Rather, she concentrates on life in the 21st century, on informing viewers about the impact of human behavior on animals.

Thus, one drawing shows a man pouring water near creatures that have died off. A text discusses the fact that various species have gone extinct on our planet; after all, the last dinosaur died many centuries ago. The problem today is a radical acceleration of extinction. Species are dying off at an unprecedented rate.

The exhibit not only expresses the artist’s concerns about the environment but also demonstrates her ability to pursue new visual avenues. In “Encroachment #3,” she portrays animals and birds swarming around humans, in a role-reversal scenario. “Ashes, Ashes All Fall Down” conveys the beauty of wildlife featuring wolves, in a drawing done in charcoal, pastel and watercolor wash. And in a self-portrait, the artist appears with a cow’s head.

The 16 drawings at ArtRage don’t make up a retrospective; the current show only samples her substantial body of work. Yet We All Fall Down plays a useful role by highlighting her drawings and artistic skills. Peden Wesley is able to portray her subjects in exquisite detail and to keep developing fresh designs. The exhibition is worthwhile both for people familiar with her work and for viewers who have never seen her drawings.

We All Fall Down is on display through March 24 at the ArtRage Gallery, 505 Hawley Ave. The venue is open Wednesdays through Fridays, 2 to 7 p.m., and Saturdays, noon to 4 p.m.